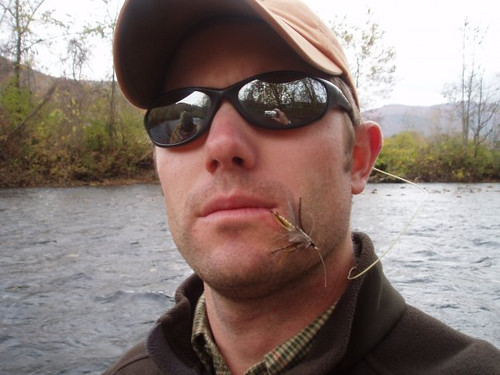 Orvis’s Steve Hemkens shows off the kind of buried hook that does require
medical attention. To his credit, he finished out the float trip first.
Photo by Steve Hemkens

In the past two days, no fewer than four of my Facebook friends have posted images of a fly embedded in their skin: two ears, one cheek, and one leg. Anyone who fishes long enough is going to end up with a hook point buried in his or her skin; it’s simply an occupational hazard. This is why it’s important to debarb your hooks and always carry a mini first-aid kit in your vest or sling pack. But there are times when every precaution in the world isn’t enough.

When I was guiding at Hubbard’s Yellowstone Lodge, in Paradise Valley, I had a favorite spot in Yellowstone National Park where I could guarantee a great blue-winged olive hatch at 9:30 am. Because the required presentation was difficult—involving a straight-downstream cast followed by a dead drift—I could bring only skilled anglers to fish there. One day I got lucky: my clients were a guy who had fished all over the West and was an accomplished caster…and his wife.

After a long drive from the lodge, we carefully waded in just in time for the daily BWO hatch, and the conditions seemed perfect. Unfortunately, the husband decided to take a few practice casts to get his range, and thanks to a gust of wind, he hooked his wife right under the chin. But that was no problem because the fly was a barbless, size 16 Sparkle Dun. Or so I thought.

She panicked when I tried to touch the fly to remove it, and she wouldn’t let her husband come near her, either. No amount of good-natured coaxing seemed to calm her, and then she demanded that we take her to the park infirmary to see a doctor. Her husband—who clearly recognized this as one of those moments in a marriage when the choice you make could have far-reaching implications—breathed one of those “Yes, Dear” sighs and started to reel up. As we waded toward the bank, the first few tiny olive sailboats appeared on the water, and the trout began to rise.

I took two lessons from this experience: 1. never fish with someone who has never been hooked before; and 2. sometimes there is wisdom in walking away from rising fish.

Note: I have fished with a lot of very accomplished female anglers, many of whom are better at it than their husbands, so this story is not meant to cast aspersions on the female angling community.

Note #2: We covered hook-removal techniques here (rather dramatically) and here.