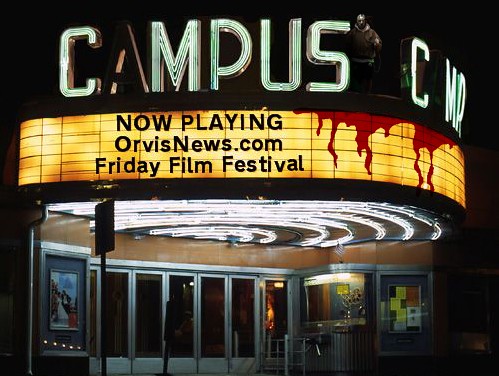 Welcome to a special Friday the 13th edition of the Orvis News Friday Fly-Fishing Film Festival, in which we scour the Web for the best fly-fishing videos available. It seems that someone atop our marquee has special plans for the evening. Nevertheless, we have a great selection this week, sixteen more videos that will take you to amazing angling destinations.

For best results, watch all videos at full-screen and in high definition. Remember, we surf so you don’t have to. But if you do stumble upon something great that you think is worthy of inclusion in a future F5, please post it in the comments below, and we’ll take a look. And don’t forget to check in regularly at The Tug, the Orvis online video theater. See you next week with a fresh set of films!

We kick things off with some great footage from the Nelson District of New Zealand, on the South Island. Seeing such big fish in shallow water is enough to make any fly fisher drool.

To be honest, I’m not sure what’s being advertised here, but this is a visually stunning video shot in British Columbia. You MUST watch this one at full screen and in high definition.

More good Idaho footage from the folks at Waist Deep Media, who specialize in out-of-the-way streams that hold big fish. Although the soundtrack isn’t gonna make them any friends in Montana.

Here’s some Florida Keys tarpon goodness, shot in a single morning on the water and featuring plenty of action.

In a project reminiscent of the Provo Bros “Steelhead and Spines,” this video combines skiing and fly fishing in the backcountry of British Columbia. It’s gorgeous stuff.

When people think about fly fishing in Montana, carp isn’t usually what they have in mind. But this video celebrates Big Sky big lips and shows just how tough they can be to catch. I love the way these guys treat the fish as well as they would any native cutthroat. (Warning: a bit of salty language.)

Why travel to Iceland to fish in what looks like an industrial drainage ditch? Because it holds giant brown trout, that’s why. Duh.

This is a very cool video about stillwater fly fishing in Alaska, shot almost entirely from underwater. There are some beautiful rainbows and cool perspectives.

What do you do when you’re trout fishing and see some actively feeding pike? You throw caution to the wind and go after them. Wire trace be damned!

I dig the look of this one. If Jim Jarmusch made fly-fishing videos, they would look like this. (Although no one would ever catch a fish.) And check out the video they’re watching on the laptop in the beginning.

If you like stark, moody videos, then this one is for you. Shot in Hardangervidda, Norway, it features cool coloring and a nice brown trout.

This isn’t the most well-made video, but it features a species new to the F5, the tuskfish. Until today, I had never even heard of a tuskfish, but now I know they’ll eat a fly. And they pull hard. Once the fish is in the net, you won’t believe the colors.

Another short-and-sweet production: They sure do grow their Atlantic salmon big in Norway, as this video from fiskebloggen makes clear.

Here’s another cool video from famed California angler Ken Hanley, exploring all that the Sacramento-San Joachin Delta has to offer. In this episode, they’re after carp and smallmouths.

Put together by a young Norwegian angler, who doesn’t fish remote, exotic places, this video shows how he squeezes the most out of his home waters.

Fianlly, we’ve got an episode of The American Sportsman television show shot in the Bristol bay region of Alaska. Of note, it features Brian Kraft, former pro hockey player, current owner of Alaska Sportsman’s Lodge, and one of the leading voices against Pebble Mine.