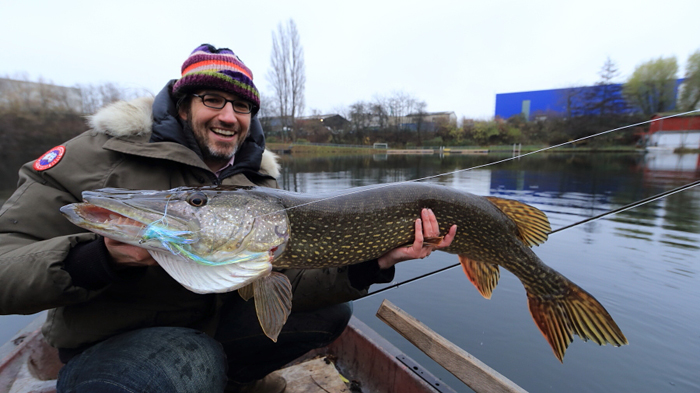 Though this small, contaminated lake is in the middle of an industrial complex, it’s home to beautiful pike.
Photo by Daniel Göz

My long time friend Freddy and I had decided to give the brand new 6-weight Helios 2 a test by providing her a nice first fish. For this, we went to a small lake, which sits right in the middle of a highly industrialized and fenced area. I did a hydrological survey in this lake many years ago, which revealed heavy metal contents worthy of recognition in the Guinness Book of records. But, I also found a pike population, which I’ve only had in my angling dreams until this day. Back then, I negotiated a deal that allows me to fish the pond occasionally. It’s a great escape from the hectic city life and it offers huge pike, so the rod’s first fish came in style: a nice and feisty 40-inch pike on a freezing cold winter morning.

Daniel Göz is a freelance photographer, filmmaker, and journalist based in Frankfurt, Germany. His best-known films are “Tapâm—A Flyfishing Journey” and “Gaula—River of Silver and Gold.”

2 thoughts on “Photo of the Day: Heavy Metal Pike on the Helios 2”