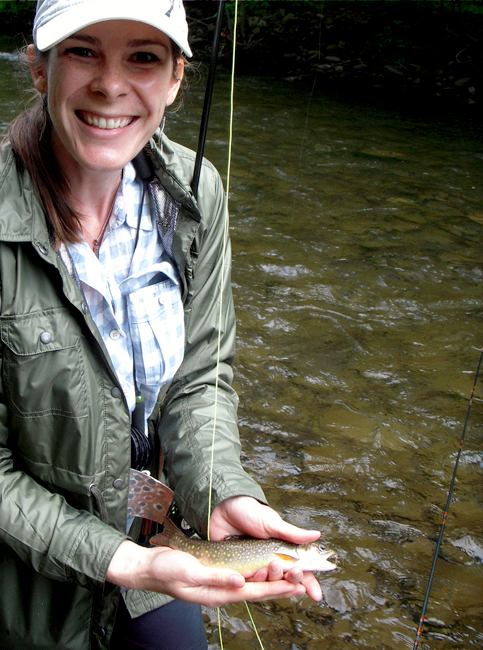 Helen came to our shop on a slow Tuesday morning with a carload of fishing equipment—mostly fly rods and assorted tackle, but also spinning rods and massive surfcasting rods. She told us she had a goal: she wanted to catch a trout, ideally using the equipment spread out in front of us.

We had only fishing staff in the shop that morning, so the three of us had fun sorting through her collection, picking out the best rod and reel setup, organizing her flies, and making sure she had good tools. She told us that some of the stuff had belonged to her husband, and some had belonged to his father.

Helenʼs husband, TJ, passed away two years ago, and his father several years earlier. TJ had cancer, and when it got bad he decided he wanted to fish in New Mexico one last time – to catch a trout in the streams he had fished with his dad as a kid. In Helenʼs collection was an old fishing vest, and in one of the pockets we found her father-in-lawʼs last fishing license, from 1999.

Helen and TJ flew to New Mexico to visit his brother and family. They rented a cabin near a stream, but soon after they arrived TJ began to have difficulty breathing. The cancer had spread to his lungs and spine. They went to the hospital, where TJ was treated, then returned home without getting a chance to fish. TJ died a week after their return.

After his passing, Helen decided she was going to catch that trout—to honor her husbandʼs memory, but also because fly fishing looked like fun. She wanted to do it for him, but also for herself. 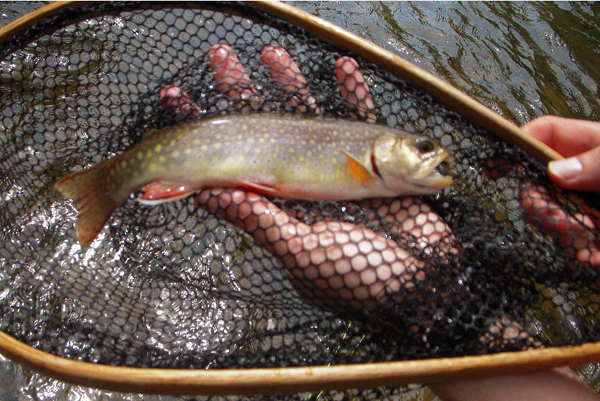 Catching a trout was a way of connecting with her late husband and his father.
Photo courtesy Orvis Arlington

When Helen talked about her trout, it sounded like she was building it into a long quest, with lots of preparation and training. In fact, it had already taken her two years just to get things settled to the point where she could think about learning to fish. We told her that she could probably get it done in a couple months. Helen had never cast a fly rod before, so we gave her a quick lesson and scheduled her into a Fly Fishing 101 class.

Because I usually work weekends at the shop, Iʼm always looking for people to fish with during the week. When I learned Helen could fish weekdays, I offered to take her to trout water and help her find fish. We compared calendars and found a Thursday that worked. In the meantime, she had about a month to get into FF101 and practice her cast – which she did, diligently.

When our designated day got close, I realized I couldnʼt get away to fish. Helen took the news with good humor, and said she might go out anyway. She stopped by the shop to pick up wading boots; when she mentioned our postponed outing, one of my co-workers offered to take her instead.

They went to the Dry River, in the Allegheny Mountains of western Virginia. The weather was good, the water was perfect, and the fish were hungry. Using her husbandʼs 5-weight outfit, she tied on a size 12 Adams and started fishing. In short order, Helen caught her first trout. Then her second. And third. In total, she caught seven trout – all wild brook trout, bright and healthy.

When Helen told me about her luck, I was happy for her—but also sorry I had missed such a great day fishing. She and I are scheduled to fish again in a couple weeks. It wonʼt be as poignant as her first trout, but it will still be pretty awesome. And maybe someday, maybe soon, she will go back to fish New Mexico at last.

Miles Townes is an associate in the Fishing Department at Orvis Arlington (Virginia).