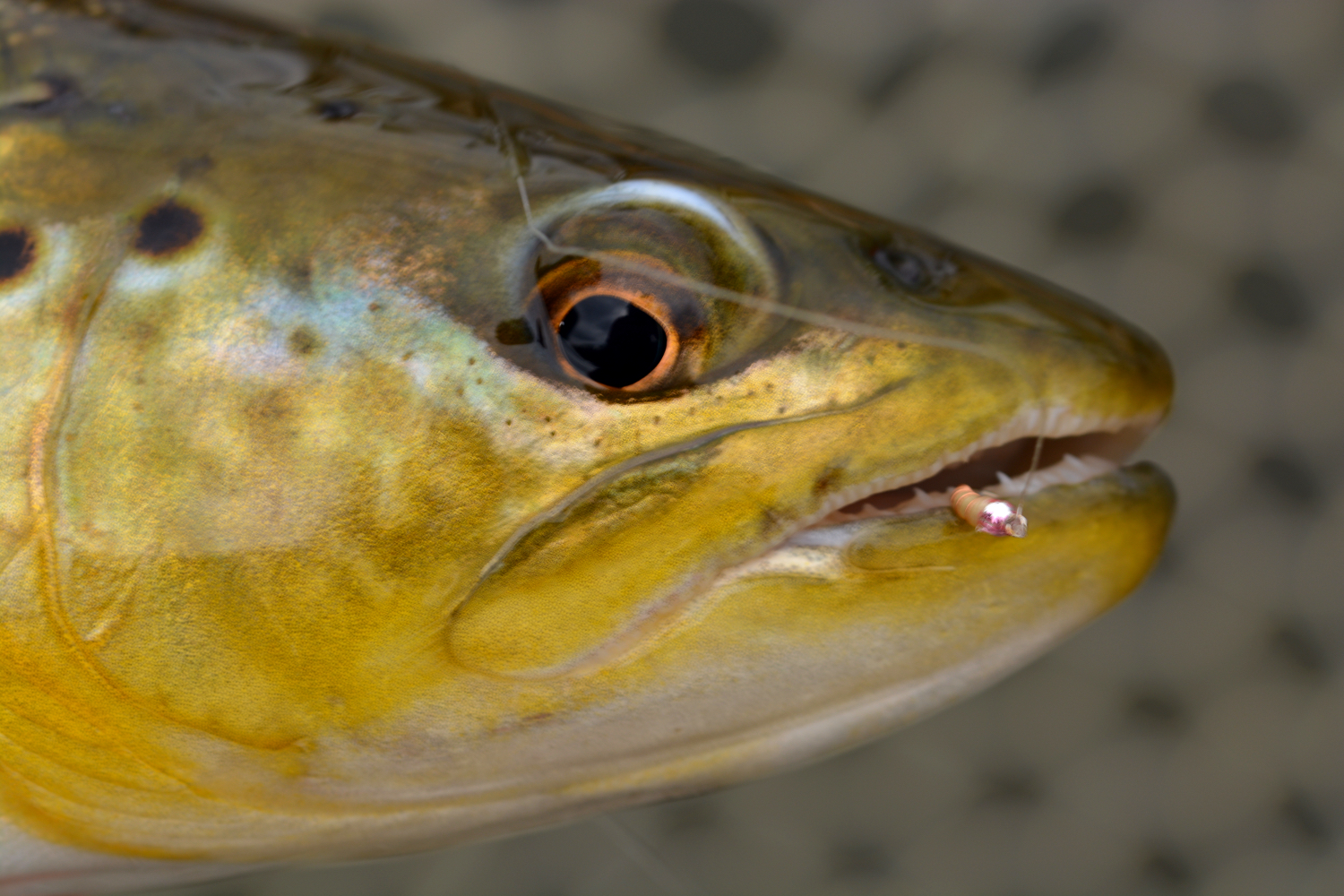 You’ve probably been there. Two hours from home, halfway through the thermos of coffee, knee-deep in cold water on a cold day, and not a single, solitary fish to show for it. They’re taunting you. Riseforms are everywhere, but not one of the shiny little bull’s-eyes has your fly in the middle of it. You’re forced to ask the most forlorn question heard on the water: What the heck are they feeding on?

The most likely answer? Midges. Nine times out of ten, when you see so many rings that it looks like the result of an invisible hail-storm, the trout are hitting midges. Members of the order Diptera (or true flies), midges are closely related to mosquitoes, blackflies, and the common housefly, and since one out of every ten animals ever described by science is a member, there are a hell of a lot of midges out there. They’re small, they’re delicate, they’re numerous, and they make for some frustrating fishing.

But one thing is very clear: trout love to eat midges. Your average brown trout in a midge hatch is like a fat kid with a bowl full of M&Ms. Although each of the bugs may not make much of a meal, a river is like a conveyor belt that delivers thousands of the tiny morsels to a fish. Midge hatches are especially prolific in tailwaters, those rivers kept at constant refrigeration by bottom-release dams. Because tailwaters are a little like Goldilocks’ favorite porridge—not too hot and not too cold—midge hatches can continue in abundance right through January. It’s not uncommon to see midges rising through snowflakes, especially in the moderate Southern tailwaters, where fishing remains open year-round.

Even on a tailwater, cold days and winter weather will more or less shut down the standard trout menu. Mayflies, caddisflies, and stoneflies can’t tolerate cold air temperatures very well, even if the water remains at a constant mild chill. Thus, from about mid-November to early March, most fishing anywhere north of Florida is going to involve midges.

Midges go through a four-stage life cycle—egg, larva, pupa, adult. The most important thing for anglers to remember is that all midges are born on the bottom of the river, and they have to make their way to the surface. Once in the air, only the unluckiest midges get eaten by trout, so the intelligent midge angler will keep that in mind and spend most of his efforts fishing below the surface.

Let’s be honest: midge fishing is tough. Imaginary tippet and nearly invisible flies make setting a hook without breaking off difficult, and that’s before you come to the fight! Many anglers swear midge fishing off entirely as “too difficult,” preferring to swing Woolly Buggers in the cold months, in hopes of catching an occasional stupid fish. But it doesn’t have to be that way. You can adapt your summertime tactics to midge fishing quite easily, and you should!

The most important mistake midge anglers make is trying to fish midge flies too close to the surface. In a heavy hatch, trout will be far more likely to scoot around snapping up midges at their eye level, near the bottom of the river, than to run topside and try to pick them out against the reflective underbelly of the surface. Choose you flies and rig to exploit this behavior. No matter how many rise rings you see on the surface, those midges are coming off the bottom, and hundreds of their brethren aren’t making it through the gauntlet.

Most midge patterns are very basic. The Zebra Midge, Disco Midge, and their many cousins are little more than a bit of something shiny wrapped up the shank of a hook with a patch of ostrich herl or a bead to represent the gills. Zebra Midges in black-and-silver or gold-and-tan with a tungsten bead head are especially effective for fishing deep. However, some of your standard mayfly-larva patterns make fine midge imitations if you tie them small enough. For instance, a size 20 Copper John in standard copper or black-and-green can be deadly producers.

Midges are usually small, but they aren’t necessarily microscopic. A size 18 barbless hook will provide satisfactory results in most situations. An angler carrying a small midge box with a series of tried-and-true patterns from size 18 down to size 22, with a very few smaller, will be equipped to handle 90 percent of the midge fishing situations out there. Generally speaking, big midges will allow you to use more complex patterns, such as the Copper John. For really tiny midges, stick to the simple stuff.

The typical midge rig for subsurface fishing is a basic right-angle nymphing setup. Because midges tend to hatch in slow current, don’t employ the standard “11/2 times the depth” length calculation. The leader should hang almost straight to the bottom from the indicator, so depth and length should be about the same. In most situations, you will want to add a fairly substantial split shot, at least as big as the bead on the fly. For midge fishing, position the shot about 8 inches above the fly. This will allow a fly-first presentation, with the nymph drifting downstream of the shot.

Many anglers believe that midge fishing requires ultra-fine tippets, but his isn’t always true. Unless you are forced to dig into the 24s or 26s that hide in the corners of your box, 6X fluorocarbon tippet will usually be thin enough. If you aren’t getting strikes on 6X, step on down. Even 7X is perfectly safe for most tailwater fish.

Split shot paired with fine tippet can create headaches because the split shot wants to slide down to the fly. Try cutting the leader where you want the shot to stop sliding, and then knot it back together with a simple double surgeon’s knot. Crimp the shot above the knot and let it slide on down; the knot will keep the shot from hugging your fly.

Rig your indicator to dunk easily, either by choosing a small amount of closed-cell foam or by coating some yarn only modestly in floatant. I prefer yarn because it is the most sensitive indicator to slight movements. Tie in a few whisps of yarn with a simple half hitch and cut it small.

Although dry-fly fishing with midges can be an absolute blast, it isn’t usually the most effective means of taking advantage of a hatch. If you do want to go on a bender and hear the smack of trout jaws amongst the snowflakes, try one of A.K. Best’s Plastic Bag Midges or a simple Parachute Midge. A better bet, though, would be one of the new breed of vertical emergers based on the Quigley’s Cripple, such as the JLC Midge. Douse these flies with floatant and lube up your tippet for several feet. You won’t have the advantage of the split shot to keep your line taught and your chances of popping your tippet go up considerably, so be gentle. Use a slower-action rod, perhaps old cane or fiberglass.

Fish Where the Fish Are

A fish can’t eat what it can’t find, and the trick to fishing midges is getting the fly in front of the fish. While you may have had a lot of luck swinging streamers through shoals in the past, indictor fishing with miniature flies can be almost impossible in areas of heavy flow because the fly just won’t get down. Look for one of two situations instead: a slow channel or tailout, or an upstream deep pocket

Channel fishing is the easiest to get the hang of. Position yourself above a seam or deep scour and play out enough line to keep from having to handle the reel on your drift. The easiest method is to bring along a stripping basket (yes, those things the saltwater guys wear) and pull your line off into it. An angler equipped with a basket can control 80 feet of line with a common trout rod, and that means plenty of opportunities to put the fly in front of trout.

Cast slightly upriver to give your rig time to get down, and then high-stick your indicator as it comes by your body. As soon as the indicator has cleared your side, drop your rod tip and smoothly pay out line, using the tip of the rod to anchor the line in the seam and keep it from bowing or getting pulled into cross currents. Get in the habit of wiggling the tip to shake line out, and keep your rod-holding fingers wet to allow the line to slip through them. Takes can come at any moment, so look sharp! When the indicator does its little dance, tighten up your rod hand and gently lift the tip.

Fishing an upstream pocket can be a little like shooting pool. Position yourself directly below a large rock or ledge, preferably with bubbles in a seam coming directly back to you. Pile up your cast as close to the structure as you can get, so the fly can get down quickly, and then smoothly strip line back into your basket (or between your feet) as it feeds to you. This is where that split shot really does its job. That weight draws slack out of the rig and gives you the ability to set the hook even when the line is constantly slouching its way downstream toward you.

Midge fishing in the winter time can be an angler’s only chance to avoid going stir-crazy. When your favorite freestone is snowed in, and your dog won’t even budge off the hearth, bundle up tight, load that thermos, and find a sunny piece of slow water down behind a dam in the valley. Instead of stowing that gear “until next season,” stop yourself and walk right past that closet and out the door. The season is now, my friend. Seize the day.

Zach Matthews is the editor of The Itinerant Angler website, host of the Intinerant Angler Podcast, and a freelance writer whose articles appear in all the major fly fishing magazines. He lives in Georgia.

7 thoughts on “Pro Tips: How to Fish Midge Patterns in Winter”