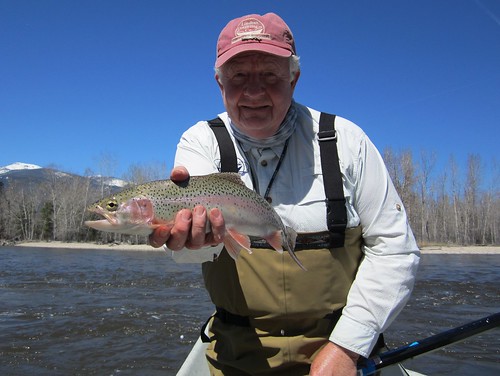 Gerry shows off one of many trout that fell for a jigged nymph during high water.
Photo by by Tim Linehan

In the spring, daily conditions can change dramatically. Wednesday it’s cool, overcast, and the river is in great shape. Thursday you show up at the boat ramp to find that thunder storms in the high country have tributaries running high and pushing color into the main river. Such was the case for me last week. I arrived on the Bitterroot and discovered that, in the previous twenty-four hours, the river had risen 2,000cfs and visibility was no more than 6 inches. For all intents and purposes, the river was out, and I considered telling my client, Gerry B. from Boise, that the day was a bust and we should just go find a bar in Missoula and watch the Red Sox.

But then I thought, just maybe, with a little luck, we could pull a rabbit out of the hat. Under similar conditions in the past, I’ve had success by jigging nymphs in deep holes and eddies caused by the rising water. It’s not traditional dead-drift nymphing by any means, but it works and it’s simple.

I rigged a long leader with a butt section of 10-pound test followed by straight 3X Mirage. Off that, I tied two size 8 Skwala nymphs, weighted with two AB split shot and a big, white Thingamabobber. Instead of fishing every inch of the river, I floated downstream to the first big, foamy eddy.

Gerry plopped the rig into the foam and after letting it sink for a moment, I instructed him to start jigging the rig. Within seconds, the indicator disappeared, and he was fast to a 16-inch rainbow. First time is just luck, I thought to myself. He plopped it into the foam again, jigged it a few times, and wham! Into another one. Second time is coincidence, right? Again, he pitched the rig into the eddy, let it drift for a few feet, jigged it, and was met with a violent strike that broke off the point fly. Hmm. . .third time is a charm, and this might actually work, I couldn’t help but believe.

And so it went throughout the day. We floated bucket to bucket, eddy to eddy, and had as good a day as ever. We even took off the indicator just to make it easier to cast. We got no hits when we dead-drifted the nymphs. Clearly the fish wanted to eat but would only take when they saw movement in the muddy, off-color water. In the end, there’s no doubt we got lucky and normally under such conditions I would have cancelled the trip. But we were there, and sometimes thinking outside the box works.