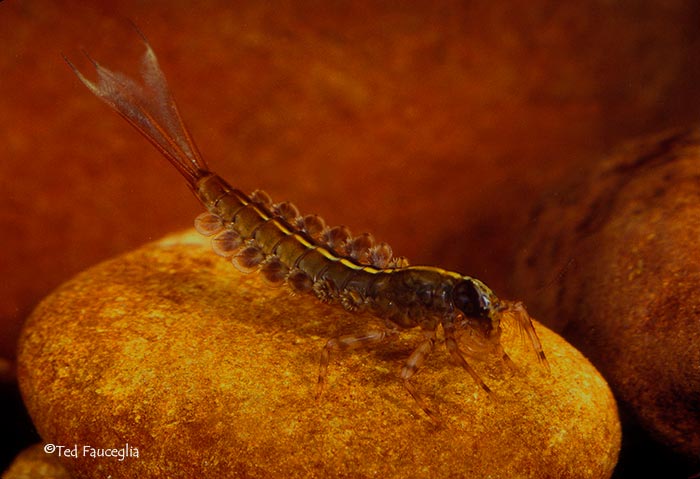 Isonychia nymphs are built for swimming and move toward shore when it’s time to hatch.
Photos by Ted Fauceglia

To simplify their identification, mayfly nymphs have been divided into four groups–burrowers, crawlers, clingers, and swimmers–and the name of each group offers some insight into the nature and behavior of the species contained within the category. This grouping of like behaviors is particularly helpful for those fly fishers who have no interest in learning the complicated Latin taxonomy, and it has enabled the less-fanatical angler to acquire enough entomological knowledge to anticipate and prepare for the sequences of nymphal activity that occur throughout the season.

However, I believe that–because of the pressure on all trout waters increasing at an exponential rate–successfully meeting any particular hatch has become increasingly dependent on a thorough understanding of the peculiarities and the behavior of the insect that the trout are feeding on. Increased pressure begets increased selectivity. And selectivity begets frustration, which can only be mastered by an in-depth understanding of the behavioral habits of insects. Knowing the exact shape of a nymph’s gills or the curvature of the male’s claspers will probably not improve your patterns, but an understanding of the technical aspects of a particular aquatic insect does. To properly imitate an insect, we need to understand the finer details of its nature and behavior. This is particularly true with Isonychia nymphs, which belong to the group known as swimmers.

Identification
At present, entomologists have classified 17 species of Isonychia, with all but five occurring on Eastern and Midwestern waters. Until recently, entomologists had divided Eastern and Midwestern Isonychia into three different species–Isonychia sadleri, harperi, and bicolor–but after further review, the taxonomic pundits have decided that all three species are synonymous. Consequently, there is now just a single species–Isonychia bicolor. From the fly fisher’s point of view, the reclassification is immaterial. What do matter are the size, color, and behavior of the insect.

Because Isonychia have such a widespread geographical distribution, they vary significantly in size and color. I’ve collected mature nymphs, in different regions, that varied from medium brown to black; they measured as small as a 2X-long, size 16 hook and as large as a 3X-long, size 12 hook.

Isonychia nymphs look and behave differently from most other mayfly nymphs, which makes identification relatively easy. They have dark, streamlined bodies with colors ranging from dark red to brownish black. Their ability to swim is aided by three heavily fringed, paddle-like tails. Their forelegs are also heavily fringed, and they serve as mini seining nets to catch drifting food. Most specimens display a thin, white dorsal pinstripe, which runs from the tip of the thorax to the end of the abdomen. Depending on their maturity, Isonychia nymphs measure anywhere from 8 to 16 millimeters in length. They have rounded heads and large, dark eyespots. The abdomen measures approximately 2 1/2 times the size of thorax. A series of large discernible gills protrude from each side of the abdomen. 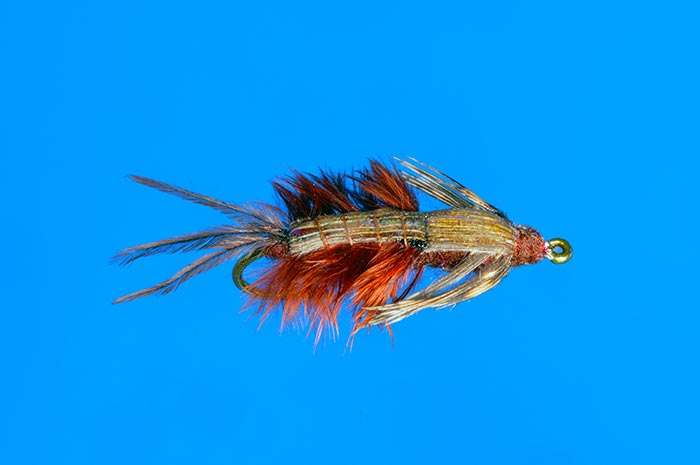 True to their appellation, Isonychia nymphs are able and powerful swimmers. Their ability to move about freely in water of all velocities was, in all likelihood, an evolutionary development determined by the insects’ preference for the well-oxygenated sections of streams and rivers. With minnow-like quickness and agility, they can dart from point to point with ease, and swimming upstream against the current is not a problem.

Isonychia nymphs are strictly fast-water dwellers. I can’t remember ever finding any specimens in the slow-water sections of the waters that I fish regularly. The largest concentrations of nymphs are found in the crevices and cracks of large submerged rocks. They are extremely shy creatures and are panic-stricken when disturbed. Like a captured minnow, they flip-flop frantically when caught. Aquarium specimens bolt from point to point until they find a secluded place to hide.

Hatching Behavior
Unlike the hatching methods of all other species of mayflies, Isonychia nymphs migrate to the rocks along the shoreline to hatch. Several seasons back, on a small freestone stream in western Pennsylvania, I sat and watched a midafternoon emergence of Isonychia. The mature nymphs slowly crawled out of the water and struggled up to the tops of the rocks. After a five- to six-minute resting period, the duns slowly broke through the nymphal case. Shortly thereafter, their wings filled with fluid and the duns flew off to the nearby trees. The hatch occurred in the middle of October and lasted for almost three hours.

During the migration, the resident trout were obviously aware of what was going on, because they moved to within 10 feet of the shoreline and greedily grabbed the nymphs moving out of the riffles into the shallow water. As far as I could tell, the nymphs both swam and crawled to the shore, because some trout made splashy rises as they fed on the nymphs in the middle of the water column, while other trout flashed as they took nymphs off the bottom. However, not all Isonychia hatches take place along the shoreline. On a much larger stream, 30 to 40 feet wide, located not more than 10 miles from the small freestone stream, I have seen the duns regularly emerge in midstream.

To match the hatching behavior of the nymphs that migrate to the shoreline, I take a position directly in front of the hatch, about five feet from the shoreline. As the nymphs move toward the shoreline, they are actually moving toward me. With a leader at least 14 feet long, I cast upstream and let the nymph float into the midst of the trout and the migrating nymphs. Using a very slow line twist, I gradually wind in the nymph. I do not use a strike indicator, and I weight the pattern by replacing the monofilament (see recipe) with thin strips of lead wire. The amount of weight I use depends on the speed and depth of the current. When I fish Isonychia patterns at the tail end of a riffle or out in the open water, I shorten my leader, add a strike indicator, and use unweighted patterns.

In the East and Midwest, mature nymphs are active from late May through the end of October. Western Isonychia species are not nearly so widespread as their Eastern counterparts, but there are two noteworthy Western species: I. sicca and I. velma. Western hatch times vary. Depending on the region, the nymphs are active anytime from late summer through early fall.

7 thoughts on “How to Best Imitate Isonychia Nymphs”