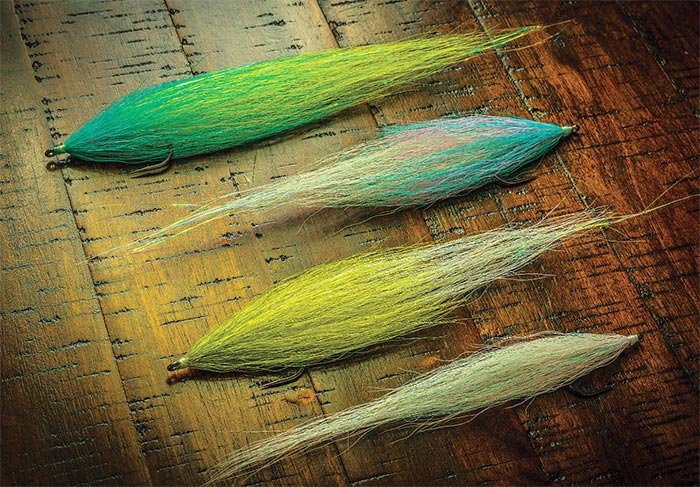 The Bucktail Deceiver can be tied in any colors you want, to match local baitfish.
Photos by Bob Popovics and Jay Nichols

[Editor’s Note: When I saw the new title from legendary fly tier Bob Popovics and Jay Nichols—Fleye Design: Techniques, Insights, Patterns, from Stackpole Books—I sent Jay a note asking if we could excerpt a chapter on the blog. He graciously agreed, and here is the beginning of Chapter 7, which introduces Bob’s Bucktail Deceiver. The pattern looks killer, and it’s relatively easy to tie, as well. Find a place for it in all your fly boxes, whether you’re chasing stripers, bass, or big trout. The rest of the book is also great, featuring 36 step-by-step tying and technique tutorials, more than a dozen new patterns, and numerous variations for every situation.]

The Bucktail Deceiver, in its purest form, is tied only with bucktail, unlike the Lefty’s Deceiver, which traditionally uses schlappen feathers for the tail. Formed from multiple ties of bucktail, often as many as eight, distributed around the hook shank to create the wing and collar, the Bucktail Deceiver’s enticing movement in the water is the result of both the broad head and numerous tips of bucktail. You control the taper with each tie of bucktail, and by tying in progressively shorter lengths of fibers at each step, you expose more tips to the water, which in turn increases motion. The end result is a beautifully tapered fly that resembles many baitfish, imparts realistic movement, and has a lifelike shape. With its natural taper and silhouette, it captures the look of most saltwater baits, big or small, anywhere in the world.

Like the 3D, the Bucktail Deceiver began as a synthetic fly, tied with Kinky Fibre. I vividly recall tying them on the car ride up to Cape Cod. While Ed Jaworowski drove, I would lash the Kinky Fibre, bunch by bunch, to the shank (which I held in my hand), and then I would trim them into a brown paper bag on the floor. The flies were fast to tie because I wasn’t concerned about shape while tying them—I would take care of that later. At the time, I was a huge fan of this technique because it was a fast, efficient way to get a realistic, beautiful shape with synthetics.

I always considered tying these flies with bucktail but was reluctant because I knew how labor-intensive it would be. Each tie would have to be precise to build the taper—I’d have to build the fly by adding materials, not taking material away. But, I eventually caved and tied one with bucktail anyway. Since then, I don’t believe I ever made another synthetic one, not only because the results were so beautiful and organic, but also because they were extremely fun and satisfying to tie.

One of the synthetic version’s greatest assets was that it was fast to tie, but I eventually streamlined the process with natural materials as well by tying in the fibers all at once and distributing them with my fingers, rather than the conventional way of tying a Lefty’s Deceiver collar, which requires multiple ties of bucktail. Doing it all in one shot cut the amount of steps by half and made the design very practical.

In the water, the Bucktail Deceiver moved like no other fly that I had seen before. It looked like it was plugged into an electrical socket—everything turned on. Every little pulse of current or twitch of the rod made the fly move and pulse seductively. Currents moved around the collar and wiggled the tail side to side, just like a natural bait where the first two-thirds of the body is fairly stationary yet the last third moves. Yet even in the front of the fly, the tips never seemed to stop moving. I quickly learned that one of the keys to retrieving this fly was to let it breathe. Take your time on the retrieve and allow the water to move in and out and all around the bucktail tips. If you opt for a quicker retrieve, watch how the rear portion moves like a fish’s tail as it swims through the water. At the end of your retrieve, you can shake your rod tip before bringing the fly out of the water to send movement down the line into the fibers. The fly goes wild. 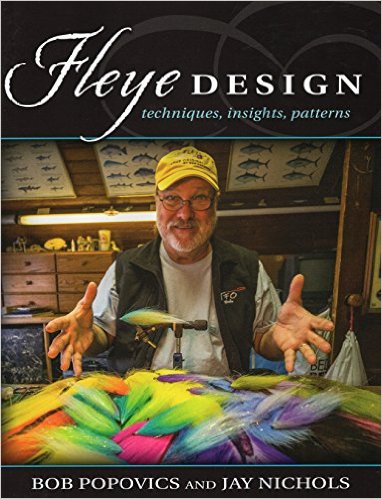 The new book by Bob Popovics and Jay Nichols is available at bookstores, fly shops, and on amazon.com.

Evolution of Design: Bucktail Deceiver Shapes
Like many of my fleyes, the Bucktail Deceiver is basically a template, a blank slate, that you can adorn as you please. Colors can, and do, run the gamut, and they are so influenced by local favorites that I am hesitant to give color recommendations. You can add flash, feathers, synthetics, eyes, and other elements to the basic design as you wish, but always maintain the general shape, the many tips that move, and the slightly bulkier collar that moves the sparser wing. These are fundamental design considerations that, when adhered to, create a fly that can go anywhere and catch fish!

More important than color and flash and other adornments, in my opinion, is how the bucktail is tied to the shank to influence fishing considerations such as profile and sink rate. The design of the Bucktail Deceiver has evolved over the years to suit various tying and fishing demands. The standard tie with fibers distributed evenly around the shank, 360 degrees, has a fairly universal three-dimensional profile that represents many common baits such as squids, mackerel, and mullet. We first showed that version in Pop Fleyes.

By squeezing the fibers from the side, you can add height and create imitations for taller, narrower baitfish such as bunker or herring. After tying in the fibers and distributing them 360 degrees around the shank, relax pressure on the thread, and squeeze the fibers from each side to force them above and below the shank. The loose fibers will always move away from finger pressure. Once the fibers are in the position that you like, tighten the thread. You can continue to relax the thread, reposition the fibers, and tighten them until you get the exact shape that you desire.

Instead of applying pressure from the side to get a high, thin profile, you can squeeze the top and bottom of the shank to flare the fibers horizontally and create “pontoons” on the sides. The end result will sink slowly and give a wide, realistic silhouette when a predatory fish views it from below and from the rear, which is how most fish see their prey before they eat. The technique for the flattened version is one of my personal favorites, especially for night fishing, where the “slow” motion of the fly through the retrieve is deadly for bass.

Another consideration when tying Bucktail Deceivers for night fishing is to make them as foul-proof as possible, because you can’t see if the fly is fouled when it is in the water, and you don’t want to be turning on your head-lamp and checking it all the time. To create a foul-proof fly, I will use really short fibers for the collar, and choose fibers from the base of the tail, which not only flare more to achieve bulk and reduce fouling but also help hold the fly higher in the water.

A subtle variation is the triangular shape, which is flat on top with a V-shaped bottom. When you tie in clumps of bucktail, form a triangle with your fingers as you tighten the thread. Like the flattened method, this is another special-purpose shape for night fishing or for whenever I want a fly that sinks slower than the standard Bucktail Deceiver.You can also combine these shapes, or variations of these shapes, into one fly. For instance, I sometimes combine the shapes for mullet, which have a flatter top section in the head and then a deeper belly. I also can use this shaping idea for shoulders around the hook bend and a narrower height and width in the front around the hook eye. Many baits are thicker in the middle of their bodies but get narrower in front.

The Bucktail Deceiver template is extremely versatile and can be modified to create everything from superb flies for freshwater trout and bass to offshore species (with the addition of a Bangerhead). The shorter fibers in the front help create more turbulence in the water. The water pushing over and around the head and will tickle the sparser fibers in the wing, bringing the fly to life. The many exposed tips continually pulse in the water.

1. Insert the hook into the vise. Wrap monofilament thread over the entire hook shank, and bring the thread back to the bend. The #4/0 Tiemco 911S has ample space on the shank for the number of ties necessary to create the right taper. Coat the thread with head cement.

3. Before wrapping over the butts with the thread, coat them with head cement. Though I won’t mention it every time, it is important to do this every time. Wrap to a point just in front of the tie-down area. At this time, I will often use a bodkin to make sure that the fibers are straight and distributed around the shank, over the bend of the hook.

4. Tie in another clump with the same amount of fibers as the first, but make sure they are about a 1/2-inch shorter than the previous step. Hairs of the same length that are spread apart evenly will ultimately create taper, but sometimes you’ll have to trim the butts a bit as well, depending on how you visualize the taper. The taper should be gradual. Do not make it look like a staircase. Add head cement and tie down.

5. Here, I have moistened the fibers to get a better idea of form. I will do this frequently while tying to get a better idea of how the fly is progressing. Moving forward along the hook shank, tie in another clump of bucktail. Consider that you are advancing your thread approximately a 1/4-inch each time. Because of this, you can use the same length fiber for each step, and it would be a 1/4-inch shorter than the previous tie-in.

6. This is the point at which I would most often change color, if I wanted a two-toned fly. For the collar I like shorter and slightly wavier fibers to add more bulk.

7. For the next tie, choose wavier fibers again to increase the bulk in the forward portion of the fly. This clump is more or less the same length as the previous one, perhaps a bit shorter. This is subtle, but I think worth mentioning. Sometimes when I get into the collar area, I want more height and bulk, which is achieved by using two sections the same length, spaced more closely together. Here, I am tying a little bit by the seat of my pants, based on my assessment of the material. Apply head cement and tie down the butts.

8. Tie down another clump of bucktail fibers. The increased bulk in the head (more fibers in each clump and closer spacing of the ties) will cause the fly to move more in the back end.

9. Apply the last bunch just at the hook eye. I like a short head, and the only way that you can get that is to clip the butt ends of the bucktail square before tying in the bunch. Sometimes when I am close to the hook eye, I will take the longest and shortest fibers out of the bundle so that I have a more consistently tapered bunch of fibers.

10. Here’s the finished fly in the vise.

11. Completely wet the fly and let it dry.

3 thoughts on “Book Excerpt: How to Tie the Bucktail Deceiver”