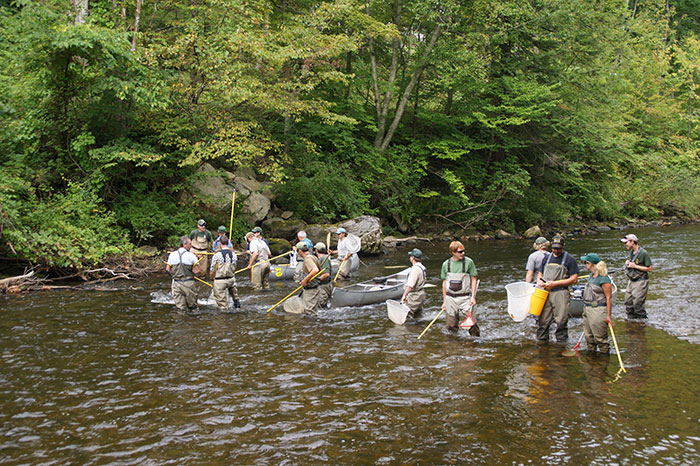 Every year, the Verrmont Fish and Wildlife Department conducts a trout-population survey of the Battenkill utilizing standard electro-fishing methods. For those unfamiliar with electro-fishing, this is a process where electrically charged wands are placed under water for the purpose of temporarily stunning fish, which are then netted and held in live cages in-stream for biologists to collect for weighing and measuring the trout. This data is recorded and later reviewed to determine the composition of the fish population by age class and also to determine a rough estimate of the numbers of fish in the stream on a per mile basis. This data is also used to determine the effectiveness of on going habitat improvement work on the river.

In the run-up to this years survey, there was more than a little concern about how well the trout population has been holding up given the harsh winter conditions of 2014-15, which saw the river freeze in many places that it normally does not, as well as the hot and dry conditions this summer, which have left the trout exposed to the robust population of mergansers, herons, kingfishers, and occasional osprey and eagle that make their way up the valley. As a wild-trout stream with no supplementary stocking, the Vermont Battenkill faces a lot of challenges year after year. To say that 2015 has been a testing one would be an understatement.

That said, the survey crew of about 20 folks got to work on the morning of September 9th with river flows at a paltry 89 CFS and water temperatures at a surprisingly cool 66 degrees given the hot spell the region was enduring. The riffle section surveyed first was a shadow of its normal self, with many habitat features exposed to very shallow or dry conditions. Even so, good numbers of fish were drawn into the electric field of the technicians’ wands and fish collection began in earnest. As is standard methodology two passes through this section were completed.

Despite the low flows and shrunken habitat available for the trout, a good number of yearling and juvenile trout were captured as well, as a solid number of young-of-the-year trout, indicating healthy reproduction in the stream. Though no true tackle-busters were captured in this section, there was one beefy 16-inch brown captured, which surprised everyone given the shrunken flows.

In order to protect the trout while they were waiting to be weighed and measured by district biologist Ken Cox, the fish were held in live cages immediately downstream from two strong springs that were issuing a steady flow of 48-degree water. This ensured that the fish would have an ample supply of cold, oxygenated water both before and after being handled by Cox. Because of these precautions, no fish were lost due to stress.

The team then moved up to the pool section above the riffle. This particular stretch has seen extensive habitat restoration and was, in fact, the first area of the river to receive comprehensive in-stream habitat restoration in the form of the introduction of woody debris and rock structures designed to encourage a narrower river channel and provide in-stream cover for the fish. [Editor’s note: Orvis was a proud sponsor of this restoration work.] 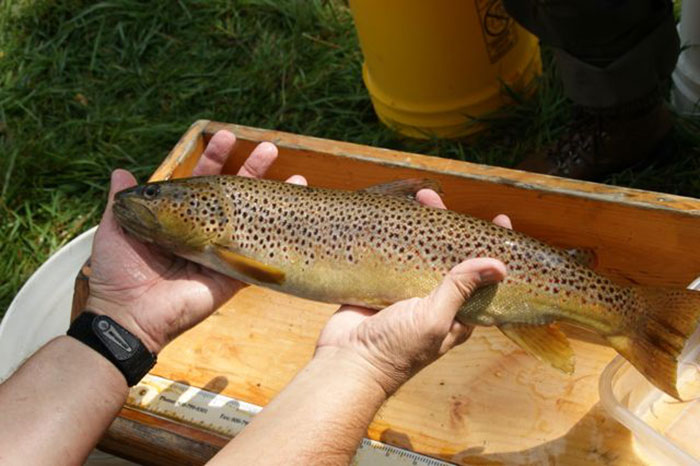 It’s always a thrill to find one of these beauties where you might not expect it.
Photo by Mike Valla

As in the riffle stretch, the river margins were greatly reduced, particularly on the shallower side of the stream. What was most noticeable about this stretch was that, while depth along the main flow was still quite good, the water moved slowly, which could impact whether or not fish would be holding in these areas. Facing warmer-than-normal temperatures, trout will often seek more aerated stretches of river in search of oxygen and the cooler waters of springs. The Battenkill is unique in that it does have a lot of springs that percolate into the stream. Perhaps the reduced flows would be offset by springs coming up from the streambed? We would soon find out.

While I was helping to transport fish from their holding stations over to where Cox would be working the fish up, I was able to see that the survey team was quite busy collecting fish. The first pass took some time to complete, as a lot of fish were collected. Clearly the population was holding up well despite a year of very harsh conditions. There would be a good number of fish to measure.

As might be expected from a river not supplemented with stocking, trout populations can fluctuate greatly from year to year, but a salient feature of the Battenkill since habitat work commenced is that populations have remained relatively stable. Yes there are fluctuations, but they are neither dramatic nor, frankly, detrimental to the fishing experience. Anglers who plop themselves down on one of the river’s “crying benches” will have to come up with other excuses than a lack of trout for the not-unusual lack of success on this difficult river.

So. . .with all that said, what were the results of the electro shocking efforts? Numbers will likely be a little below the average from the last few years. The fish on the river have been exposed to predators for a lengthy period of time, and juvenile and two-year-old numbers in the survey seemed a little, only a little, down. What was most encouraging was that the numbers of fish in the 12- to 16-inch range were most definitely up. There was excellent representation of this size class of fish. In years past, there has been a noticeable gap in the numbers of fish in this size range. Not so this year.

And what sort of big fish were collected? Well, as noted, a nice 16-incher was captured down in the riffle area, while up in the pool there were four browns 17 inches and larger, as follows: 17 (2), 19, and 23 inches. There was also a stunning brook trout of 12 inches. That’s not a bragging fish in Maine, but on the Battenkill that is pretty good.

One final observation worth mentioning is that while trout were the survey target the crew turned up a lot of dace and sculpins, while crayfish were readily apparent. For dry-fly snobs like me that is a reminder of how many calories that do not have wings are available to trout!

Doug Lyons lives in Massachusetts but frequently makes the 3+-hour drive to fish his beloved Battenkill, as he has for more than 30 years.

2 thoughts on “How Well Do Wild Trout Come Through a Tough Winter and a Drought?”