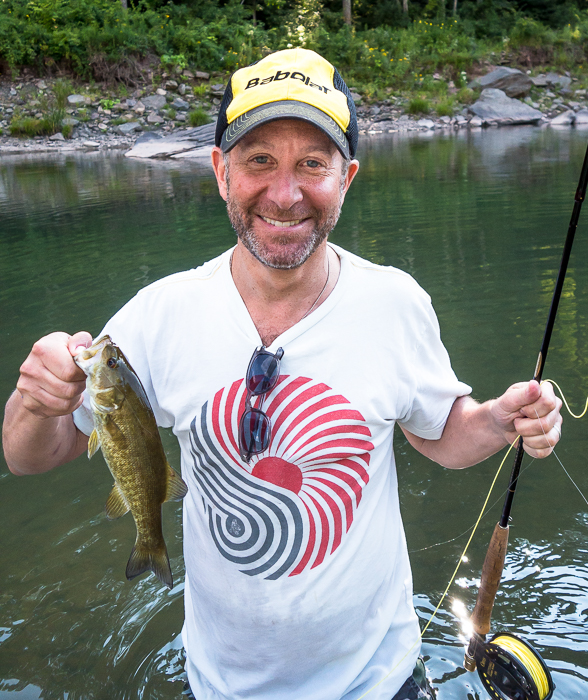 Everybody has an idea of sublime moments in fly fishing. Mine include the rattle of a hooked tarpon’s gills on its first jump, the distant glint of a tailing bonefish on the other side of a shallow flat, the first mayfly of the season tiptoeing across a riffle, the subtle wink as a large brown trout pushes aside foam as it rises in a hidden backwater. Also on my list is seeing a friend hook his or her first fish on a fly.

A few years ago, I heard a rumor that the editor of Men’s Journal was interested in learning to fly fish. It is one of my favorite magazines, as I’ve always enjoyed its mix of gadget reviews, cooking ideas, common-sense health tips, and some fine long-form journalism. So I got the contact information for Jason Fine and offerred to give him a free lesson at his weekend home in Woodstock, New York. We hit it off, and I’m fascinated by his worldview, and also his behind-the-scenes stories of the music world, because before taking the helm at Men’s Journal he was editor of Rolling Stone for many years. I loved his enthusiasm to learn fly fishing, of which he knew absolutely nothing—but living in Brooklyn, he was desperate for some quiet immersion into the natural world.

His first lesson was on a friend’s backyard pond, and he caught a few pet sunfish after some casting lessons. Jason took to fly casting well, as he is a tennis player at the professional level, so once he understood what aspects of a tennis stroke not to use, he did quite well. What I really wanted to do was to take him for some real fly fishing, but his busy schedule—combined with his wife Tracy’s equally busy schedule as a touring musician plus a 4-year-old son and two dogs—kept us from connecting for a year. 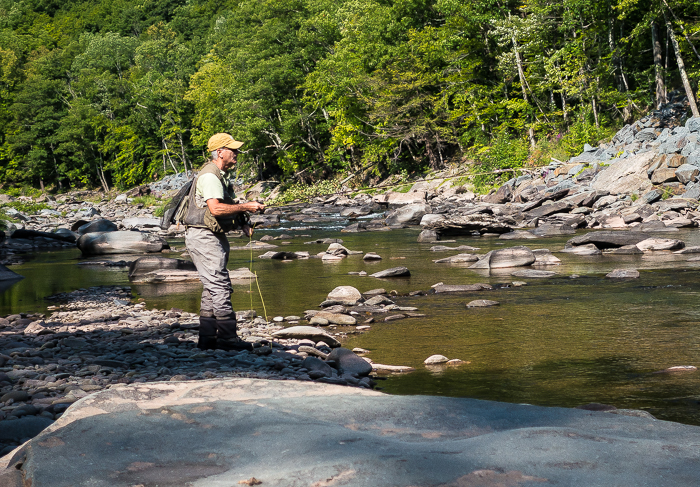 Irwin Mallory is the master of the Schoharie—and an amazing teacher.
Photo by Tom Rosenbauer

Last week, Jason finally had a free weekend day in Woodstock and luckily nearby Schoharie Creek was fishing unusually well for midsummer. This small river, immortalized by Art Flick in the 20th century, is one of my favorite rivers. It flows through a scenic valley. It is just large enough to be considered a river but small enough to be manageable on foot—and it has few inner-tubers and no drift-boat traffic. Of course, it has all the classic hatches covered in my childhood bible, Art Flick’s Streamside Guide. I had not fished the Schoharie in about 30 years, so I called Irwin Mallory, the dean of the Schoharie, who guides on the river during the summer and for the past 30 winters has run the Hunter Mountain Ski Shop. I was also to learn that he is one of the finest teachers of fly fishing I’ve ever met.

Just as I suspected, Irwin knew exactly the right places and times for Jason: midday on the lower river for smallmouths and rock bass, and evening on the upper river for trout. Irwin has been fishing that river since he was a kid, so he knows every inch of the river and its moods at any given time. I wanted to get Jason over some fish that were not too difficult, but were wild river fish instead of tame backyard sunfish. Irwin had Jason begin with a popper but soon analyzed the situation and realized that the typically agreeable smallmouths were just not interested in surface food. So the three of us traipsed up the river to another pool. Anyone watching would have thought the Schoharie had been invaded by Hobbits because, at barely 5’6”, I was the tallest of the three.

Irwin rigged Jason up with a size 10 Prince Nymph. No indicator dry, no bobber, just a naked Prince. And soon Jason was getting the hang of watching his line drift, feeling for the subtle grab on the end of his line and watching for that elusive hesitation on the line. Not only did he begin whaling on the rock bass and smallmouths, but he also learned how to play the fish, release them, and get his fly back in the water for another drift—all on his own. His grin was only slightly wider than the ones on Irwin’s and my faces. 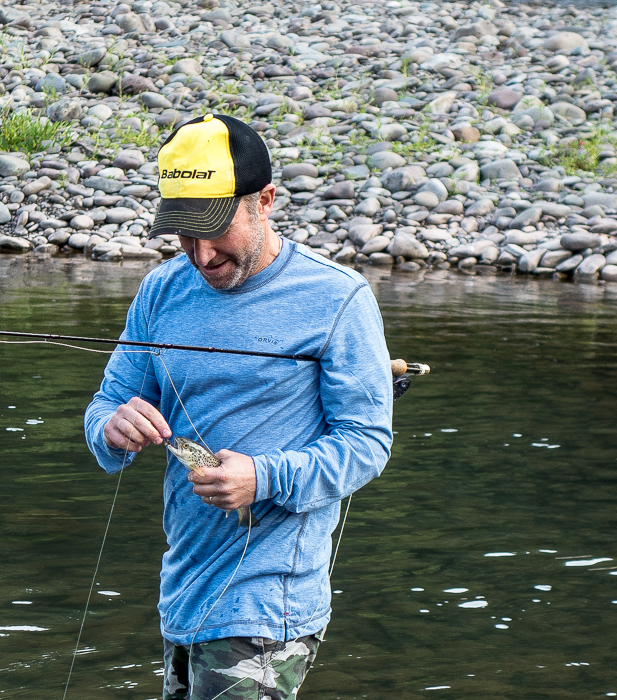 Jason Fine with his first trout—on a dry fly. A Parachute Adams of course.
Photo by Tom Rosenbauer

Later, we planned to get Jason his first trout, but wild trout can be snotty. Earlier in the day, before Jason arrived, Irwin and I had fished through a little canyon and caught a bunch of brown trout on dry flies, but these fish were all wild and some of the most agreeable little browns I have seen in a while. I had not realized the Schoharie had such a nice population of wild fish as I had always thought it was totally hatchery-supported. Definitely not so.

But for Jason we needed some low-hanging fruit. And Irwin knew exactly the right place to take him. Sure enough, as soon as we approached the little side channel right at the parking spot, a half-dozen trout rose in easy places. It was the perfect setup for a first trout. Jason, now practiced and confident from his afternoon with the bass, made a few nice casts, hooked a couple and lost them because his hook set was not quite firm enough, and finally landed a nice 10-inch brown trout—the first trout of his life, first trout on a fly rod, and first trout on a dry fly all at once. The soft evening light was gorgeous, a huge full moon rose over the Catskills, and we all left the river feeling that life was pretty damn nice.

2 thoughts on “A Day of Firsts on Schoharie Creek”