Written by: Adam McNamara, Store Manager of Orvis, Portland (OR). 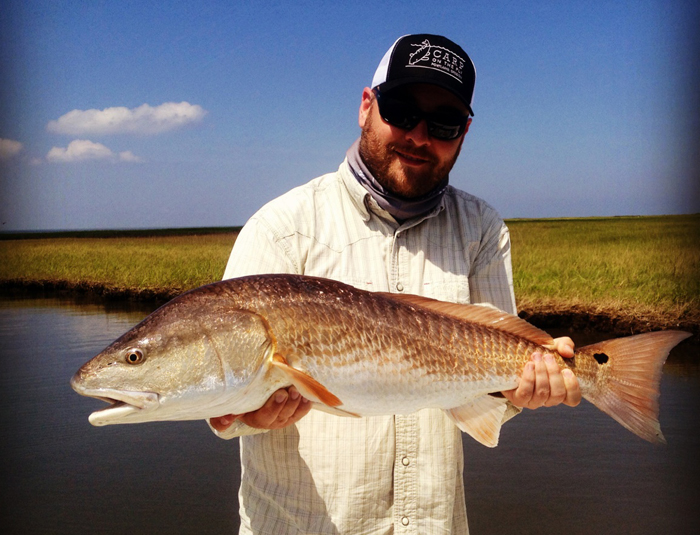 After almost 10 years as a full-time guide, I wanted a secure, long-term job at a real fly fishing company. I found that place working for Orvis, where I am now the Store Manager at Orvis Portland. In December I won a company-wide contest that meant I was given the option of fishing wherever I wanted in the United States with one of our awesome Orvis-endorsed guides.

One would think that, with so many amazing destinations to choose from, this decision would have been a hard one, but for me there was only one choice. I have had a Louisiana redfish trip on my bucket list for a long time and had been hearing of an awesome guide we were working with named Lucas Bissett. Lucas specializes in sight-fishing for the big redfish that inhabit the Mississippi River Delta just outside New Orleans. [Editor’s note: We’ve posted about Lucas before: see here, and here.] Rob Tibbett, Orvis Retail Outdoor Merchant and co-host for this trip, got to work, and soon the plans were made, the dates were booked, and the next few months waiting began.

After I had waited years to fish for Louisiana reds, one would think that a few more months would be a snap, but I found myself anxiously awaiting the end of May, tying far too many flies and hoping the weather would hold out as we approached the upcoming hurricane season. At the end of May, I flew to New Orleans airport to meet Rob and a quick 30-minute drive took us through the city to Chalmette, where we would stay for our trip.As far as world class fishing destinations go, this trip was a cinch, so far.

The next morning, we awoke to perfect weather conditions for sight-casting to fish, with bright blue skies and almost no wind. Lucas was waiting in his truck outside the hotel, and we were on our way to the delta with a quick stop at Penny’s Dinner for what turned out to be one of the best breakfasts I had ever had: crab cakes and fried eggs with shrimp gravy and a grill biscuit. Now, I am a chubby dude anyway, but if I lived here I would be 400 pounds!

While we ate, the diner filled our lunch orders of po’boys for the road, and Lucas filled us in on a bit of the history of the area; turns out that the diner where we sat had been ten feet under water during Hurricane Katrina. All throughout the quick drive to the water, we kept seeing the signs of the resilient culture of the people in Louisiana to rebuild and return to the way of life they had always known. As a resident of the Northwest, I had always failed to understand the desire to not move away after the events of Hurricane Katrina; now seeing the culture of the place, I could easily understand that staying was the only option for many. 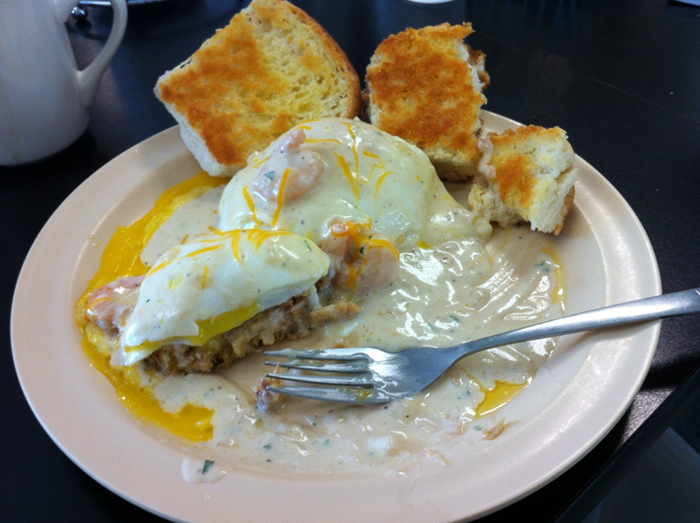 Nothing starts an angling day better than a hearty breakfast.
Photo by Adam McNamara

When we arrived at the marina, Rob and I prepped our gear while Lucas dropped his skiff into the water, and I tried my best to cover every inch of my pasty white skin, which hadn’t seen the actual sun since the previous September. I had a 9-foot, 8-weight Helios 2 with a Redfish taper for the majority of the fishing we would be doing, but I had also brought a 9-foot, 9-weight Helios 2 in the hope that we would get a chance to throw some big poppers and Game Changers or if the wind got nasty. Turns out, I packed rods all the way across the country for nothing, as Lucas already had a quiver of the exact same setups in the boat and ready to go.

As soon as we were under way in the boat, it was readily apparent that you are totally at the mercy of your guide’s knowledge of the area. I have a captain’s license myself and have run boats all over the Northwest and Alaska, but I was completely lost within five minutes of leaving the ramp. Lucas expertly guided the boat through the lagoons and channels of the bayou, while Rob and I contented ourselves with watching the bird life that was plentiful along the route and the wakes and splashes of mullet doing whatever it is that mullet do.

After a pleasant boat ride, we arrived at the first spot of the day, a small bay in one of the many islands that lay scattered across the delta. I was up first and almost before I could get up on the platform, Lucas pointed out a large wake headed past the boat. It turned out be a false alarm—as a large bull shark came cruising about ten feet to the left of the boat—but it was still a very cool first sight for a fisherman from Oregon. Almost instantly, Lucas spotted some redfish moving along the bank in the other direction, and I got a shot at them. A really crappy cast sent them scurrying off the flat at ultra-high speed, and Lucas only half-jokingly had to explain that, while he wanted me to put the fly right on the fish’s face, putting the fly halfway down the fish’s back wasn’t quite the same.

It only took a few more minutes for the gods of fly fishing to give me a chance at redemption, as a backing fish made itself known only about 20 feet from the boat. This time my aim was true, and the fish quickly inhaled the fly. While redfish lack the speed of bonefish, they more than make up for it in aggression and stamina. This first fish only showed quick glimpses of the backing on my 8-weight, but the battle lasted longer than I expected and involved multiple laps around the boat as the fish attempted to tangle in anything he could wrap around. A few minutes later, I found myself holding my first redfish; it was a beautiful fish with rusty red scales and a iridescent blue stripe on the tail. As the culmination of a trip I had wanted to take for so long, it meant much more than a six- or seven-pound fish normally would.

After some quick photos, we released the fish to head off on its merry way, and Rob was up. It didn’t take Rob long to make a perfect cast on a moving fish and hook up for his first fish of the trip. He declined a picture, and I was up again. The day steadily continued like this with shot after shot. Lucas warned us that not all days were like this, as we took shots at redfish, black drum, sheepshead, and even some big old alligator gar. If we wanted to catch a fish on poppers then the fish ate poppers; if we wanted the fish to eat a Game Changer, then they would. While we didn’t hook every fish we cast at, the day was an epic one. I believe Lucas referred to it as a “checklist day,” meaning that if we wanted a shot at a species, we got it, and by the end of the day we had had better fishing than anyone could ask for. 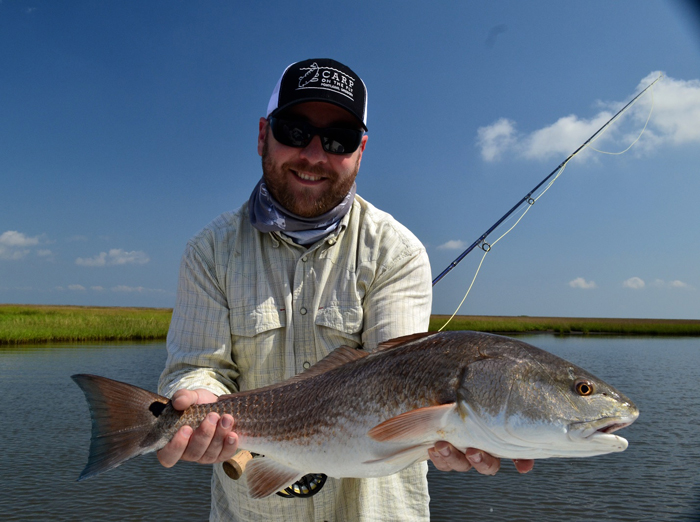 The first day on the marsh was magical, the second was too, but in a different way.
Photo by Rob Tibbett

On the way home, we kept seeing people parked along the canals with long poles pulling stuff from the water. Lucas told us that it was crawfish season, and they were harvesting crawfish for sale. He asked us if we were interested in the Louisiana tradition of a crawfish boil. Obviously, there is no answer to that question but yes, so we were off to a little fish shack called the Daily Ketch for cold beers and this southern staple.

Now let me explain that I have eaten crawfish in a restaurant here in Oregon before, and these are not the same experience. Up here, you will pay something like a dollar a piece for some crawfish, get them on a fancy plate, and then spend about five minutes apiece trying to figure out how to get them picked apart so you can get the meat out without getting stuff all over your nice clothes. In the Daily Ketch, you pay barely over a dollar a pound, and they are served to your table on a tray roughly the size of a garbage can lid; it’s a messy affair with oily, salty crawfish juice flying and ice cold beers plucked from a giant cooler in the middle of the room. Locals from other tables carried on conversations with us, as we learned the art to stripping a tail off with all the meat intact and then sucking the juice from the head of the bug in seconds. I dare say I picked up the art of eating crawfish much quicker than I learned to hit a redfish correctly with a fly.

The next morning was a repeat of the first, with another amazing breakfast and a couple more of the amazing Po’boys from Penny’s Café on the way out to the water. The weather looked pretty much the same, but with an absolute lack of wind and a higher temperature, the humidity was unbelievable for those of us from the North. We started out in the same type of water as the day before, but the fish seemed much more on edge, and the first few groups of redfish spooked way before we ever got a shot at them.

The day turned out to be the exact antithesis of the day before, with clouds moving in and the wind picking up a bit fairly early in the day. For all of the things that worked out perfectly the first day, karma smacked us around the second. We frightened fish too far out to cast, we saw many fish tailing or backing in water we couldn’t get the boat into, we saw giant fish tailing and race over to find nothing only to have them start again as soon as we moved on. And there were sharks; everywhere we went we saw sharks. From small little blacktips to giant bull sharks they were our ever present companions as we hunted for redfish.

Lucas worked hard and put us on fish, but even when we got shots we couldn’t make it happen—we made bad casts and “trout set” on the fish that ate. Now this may sound a bit like a bad day, but it was anything but. We had our shots at fish with nothing to blame but angler error. We saw an amazing array of bird life, including oystercatchers, marsh hens, and a huge group of roseate spoonbills that seemed almost happy to pose for the camera. And we spent a great day on the boat with friends reliving past trips and scheming new ones for the future. At the end of the day, a trip doesn’t get any better than the one I just had, and I am already looking forward to January, when I will be standing on the bow of Lucas’s skiff again, looking for the telltale wakes of big redfish.

Click here to learn more about Capt. Lucas Bissett and his fishery. 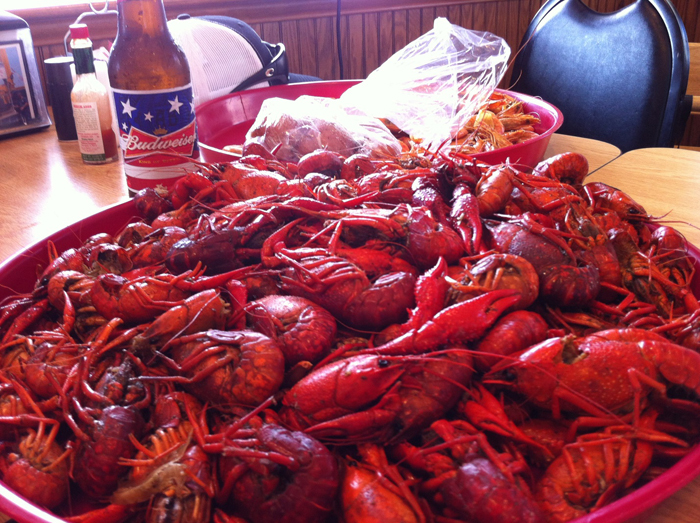 They don’t do it like this in Oregon!
Photo by Adam McNamara

3 thoughts on “Trip Report: A Bucket-List Adventure for Louisiana Redfish”