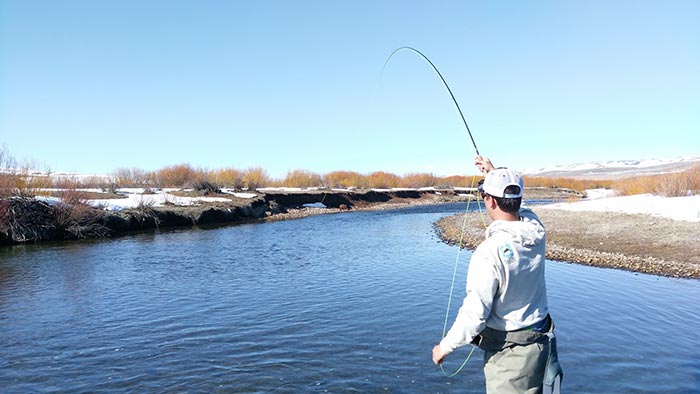 One of the beauties of pre-runoff fishing is that rivers are often uncrowded.
Photo courtesy Spencer Durrant

I grew up in a fishing family. My grandfather tied flies commercially for 27 years (a bit of that rubbed off on me, thankfully), and one of my earliest memories is standing in a stream with my father as he threw dries to rising brown trout. Fly fishing has been in my blood since I could walk.
Like any fly fishing family, we have our secrets: fly patterns we’re careful to never photograph, stretches of oft-hit water that are overlooked but hold big trout. But perhaps the most valuable family secret passed down from my grandfather to me is that of the magic of pre-runoff spring fishing.

When spring arrives and the blue-winged olives start hatching, fishermen make a mad dash to their nearest river, grateful as hell that the need to fish size 26 midges has (for the most part) passed and “reasonably-sized” bugs can be fished on top. (BWOs in sizes 18-22 seem reasonable in my book).

For as long as I can remember, that mad dash for my family has been to a tiny spring creek here in Utah, tucked away in a narrow mountain valley just a half-hour from the most densely-populated area in the state. Timing a trip to this creek in the two or three weeks before runoff muddies it up is a surefire way to guarantee a day of big, mean browns on dries.

Until 1983, people lived alongside this creek, in a town founded by my fifth-great grandfather James Pace. The Pace family headed West with the Mormon pioneers in 1847, and I like to think that upon seeing this particular creek, they busted out some bamboo rods and began fishing for what at the time would have been Bonneville cutthroat trout. After all, James Pace knew Wilford Woodruff, whose 1847 account of fly fishing in Wyoming is the first recorded moment of fly fishing west of the Mississippi. 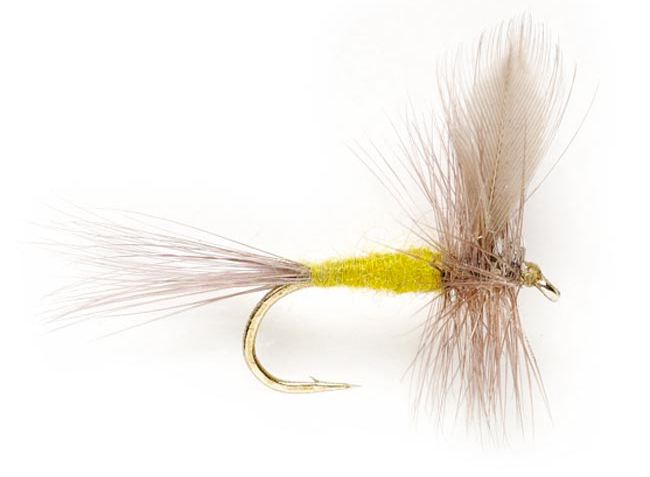 Alas, there’s no historical evidence to support that notion, but nonetheless I entertain the thought.
Now, this past winter was particularly brutal out West, compared to the past few years. I knew runoff would happen later in the year, and when it came, it’d be ferocious. Having fished the family creek extensively, and doing alright, I started to wonder if the same pre-runoff fishing magic existed on other waters.

That’s when I headed north, to Wyoming.

The Cowboy State has long held a soft spot in my heart, if only for the fact that I grew up working on farms, ranches, and orchards – iconic parts of the American West that are quickly vanishing. Wyoming’s rolling cattle ranches, rugged Rocky Mountains, and flat prairies give me faint hope that the spirit of the West isn’t completely dead.

My buddy Bill and I met up with Jason Morris and Erik Floyd—guides from Feathered Hook in Afton, Wyoming—on a brisk Saturday morning. I’d talked with Jason about my desire to get into the pre-runoff action on a stream other than my “family stream,” and he assured me we’d find what I was searching for.

A snowmobile ride, frozen river, and 30ish miles of driving later, we arrived at the only stretch of open water for miles.

To make a long story short, Jason’s assurance that I’d find the magical pre-runoff fishing held true.
A sputtering midge hatch came off and on all day, and when the fish weren’t rising to dries (I had one hit a size 14 Parachute Adams!) they were smacking Zebra Midges with the ferocity usually reserved for egg patterns.

Bill hooked up first, landing his biggest fish on a fly rod to date. 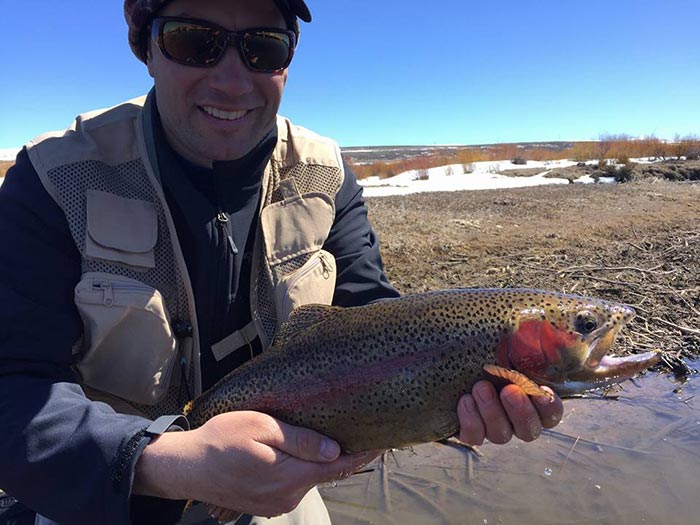 We walked up and down the small stretch of open water, searching for rising trout and fish stacked in the buckets at the head of fast riffle-filled runs.

That’s when Jason and I saw the fish. You know, that fish you see once or twice a year that’s just an absolute brute, the fish that you know if you hook it, it’ll haunt your dreams for years to come if it doesn’t end up in your net.

I’ve had my fair share of those fish in the past year. A cutthroat in Idaho that was probably 14 or 15 pounds (in a river!) comes to mind first. That trout is followed by the fish that I never saw, but it took me out to backing twice on a medium-size freestone stream before snapping my tippet. The fish I saw that day in Wyoming was one of those fish, and I didn’t want to lose it.

With Jason’s coaching, I lobbed a cast in front of the monster trout, and he swallowed my fly. The next ten minutes were a blur as the fish peeled line off on a downstream run, me swearing under my breath as I slipped and stumbled after the thing, and Bill’s splashing as he lunged to net the 24-inch rainbow.

Unlike the other fish, this one made it into my net and into my pictures – which are, of course, essential if anyone is to believe your big fish story. 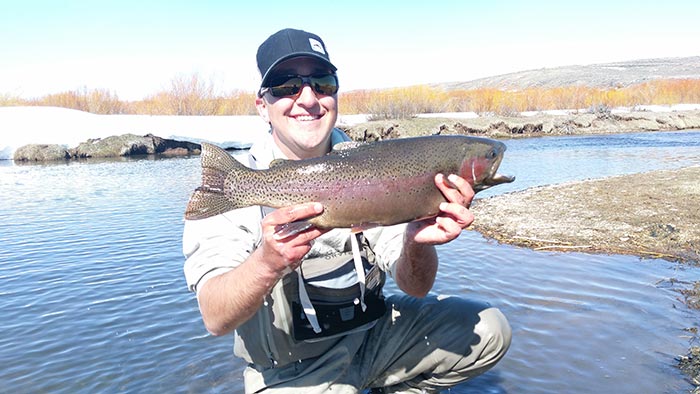 The drive home that evening was spent with Bill and I reliving the day’s events, but as the conversation lulled, my mind drifted back to the topic of pre-runoff fishing. I know knew the magic window didn’t exist solely on my “family river.” It’s a window of opportunity available everywhere – you just have to be willing to look for it.

Spencer Durrant is a fly fishing writer from Utah and the author of the upcoming YA novel, Learning to Fly. He’s a columnist for Ogden, Utah’s Standard-Examiner, KSL.com, Fishwest, and the marketing director for Trout Life, a Colorado-based fly fishing apparel startup. He’s a regular contributor to Hatch Magazine, On The Fly Magazine, and the Orvis Fly Fishing Blog. Connect with him on Twitter and Instagram @Spencer_Durrant, or on Facebook.

3 thoughts on “The Magic of Pre-Runoff Fishing in Wyoming”