Back in September, we made a call for nominations for the first annual Orvis breaking Barriers Awards. According to Simon Perkins, senior manager of Orvis Adventures and Hunting, the Breaking Barriers Awards were created to honor individuals who have gone above and beyond to bring new blood into fly fishing, to break down the barriers of introduction.

“Over the next year,” says Perkins, “all of us at Orvis will keep an eye out for people who are engaging new audiences and feeding the sport. We will encourage them, help them, and nominate them. We want our fellow fly fishers know what awesome work is being done to help foster growth in our industry. Kids, women, new audiences—that’s what is going to propel the sport forward into the coming years.”

On April 24, the first Breaking Barriers awards were presented to Chad Brown of Soul River Runs Wild and Lori-Ann Murphy of Reel Women at an emotional ceremony in front of 500 fishing guides and industry people at the annual Orvis Western Guides’ Rendezvous in Missoula, Montana. 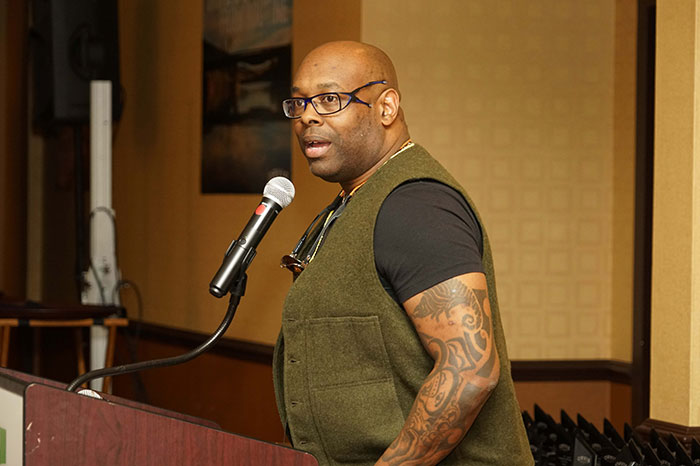 Chad Brown gave an emotional speech as he accepted his reward.
Photo by Tom Rosenabuer

In 2010, Chad Brown was diagnosed with Post-Traumatic Stress Disorder, 15 years after working as a Combat Explosives Engineer in the US Navy and completing two tours of support of Operation Desert Storm in Kuwait and Operation Restore Hope in Somalia, as well as operations in Cuba, New Zealand, Iceland, Egypt, Korea, Kenya, Antarctica, Afghanistan and Spain. PTSD became a daily struggle and reality in Chad’s life.

Chad knew he wanted alternative therapies and was introduced to fly fishing by a friend. He recalls the feeling of complete happiness the first time he ever hooked a fish. He knew then that connecting with the outdoors would be his path to healing.

Chad started Soul River in 2010 to merge his love of art, creativity, and design (he had worked for 20 years in creative advertising and design) with his new love of fly fishing. Soul River is urban, outdoor fashion apparel and gear inspired by fly fishing, that also serves as a vehicle to communicate environmental advocacy and share the healing powers of fly fishing with a younger and very diverse demographic.

He later started Soul River Runs Wild, a non-profit that is an outdoor, specifically water-based organization bringing under-served inner-city youth and veterans together to the river and returning them home as inspired ambassadors of nature and individuals who have shared in the healing power of fly fishing.

The non-profit operates at zero cost to participants. Military veterans volunteer and serve as mentors to the kids. In 2014, Soul River Runs Wild connected more than 300 kids, ages 10-18, with fly fishing, entomology, river reading, casting, navigation, team leadership, and more. Chad expects over 600 kids to go through the program this year.

Chad has been invited to share his vision and passion at the city, state, and federal level, including on Capitol Hill. In July, Outside magazine will have a feature story on the work that Soul River is doing to make fly fishing more inviting to diverse demographics. 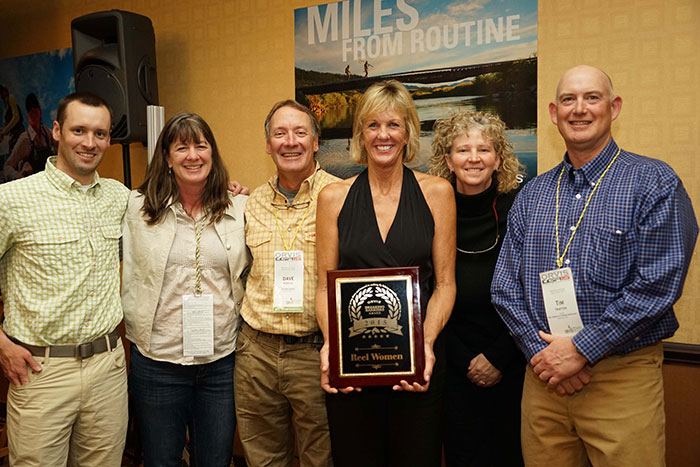 In 1992, Lori-Ann Murphy put on the first ever Orvis Women’s Fly Fishing School in Jackson, Wyoming. It was such a success that, the next year, Lori-Ann teamed up with six other women and led a weekend fly fishing school that filled up with twenty-seven participants from all over the country.

The women in the class all said the same thing: “they felt so much more comfortable and at ease learning and conversing with other women when it came to fly fishing.” Thus, Reel Women was born. It became their mission to share a passion for fly fishing with other women and inspire them to tap into the fun and adventure that plays such an important part of the fly fishing world.

That summer, Lori-Ann and two of the women returned to guiding in Wyoming for Joe Bressler Outfitters, but as Lori-Ann says, Joe saw the writing on the wall and so he supported and gave them the confidence to start their own guiding company.

And it wasn’t just about women—it was about inviting anyone interested into the sport. The Reel Women schools and trips opened up to men and women alike, and soon Reel Women had their own shop.

It became contagious, as Reel Women started to serve as examples for other women to start their own schools and lead women’s trips all over the world. The Reel Women team grew and Lori-Ann partnered with Jennifer Cornell to oversee the organization. Jennifer embodied the same mentality as Lori-Ann, as she had taught female directors of the Bahamian Ministry how to fly fish while she was working as a fishing director in The Bahamas.

The individuals of the Reel Women team continue to do great things individually and collectively within the industry as guides, instructors, trip leaders and fishing directors. Their mission is to introduce women to the life of fly fishing and they continue to seek new opportunities to make the sport more inviting. 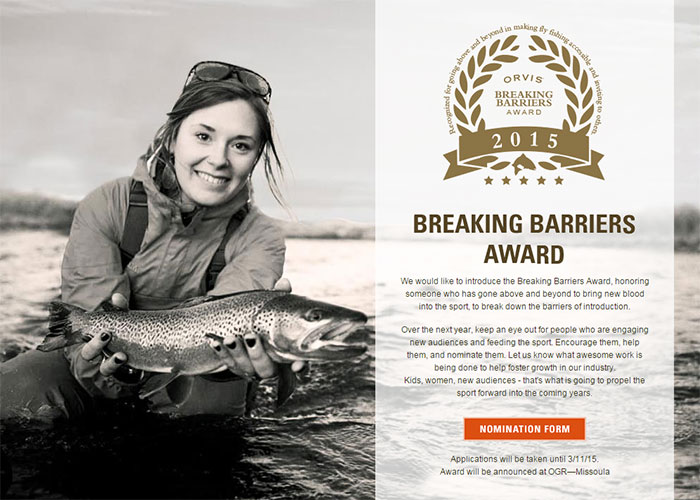