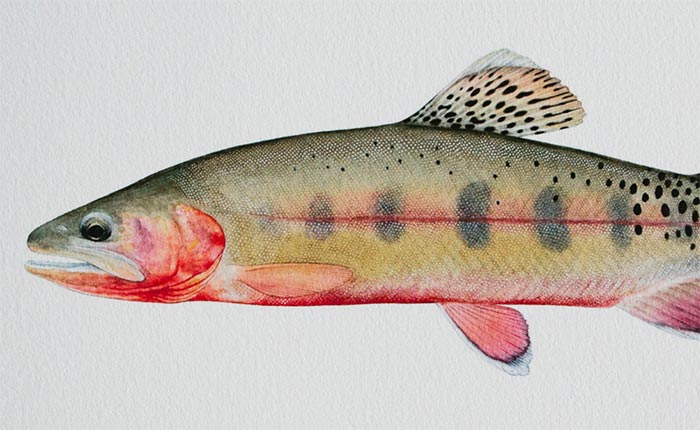 Each painting is an exact rendering of a fish, such as this golden trout, landed during Chase and Aimee’s travels.
All art by Chase Bartee

[Editor’s note: We have been posting the gorgeous films of Chase and Aimee Bartee (a.k.a. Tight Loops) for the past few years, and I’ve gotten to know them a bit in the process. As you might have guessed, they are both committed artists, and Chase has recently launched a series of scientific illustrations of trout. I asked him to give us his artistic background and to describe how he creates the beautiful and remarkable works.]

As soon as I was old enough to hold a pencil, I was drawing things. Both my parents are creative and gifted in their own rights, and strongly encouraged their kids to explore their own creative passions. As my love of illustration grew, so too did my interest in the natural world, with an emphasis on wildlife. I was the weird kid in grade school with hundreds of dead insects labeled and mounted with pins to boards in my room. 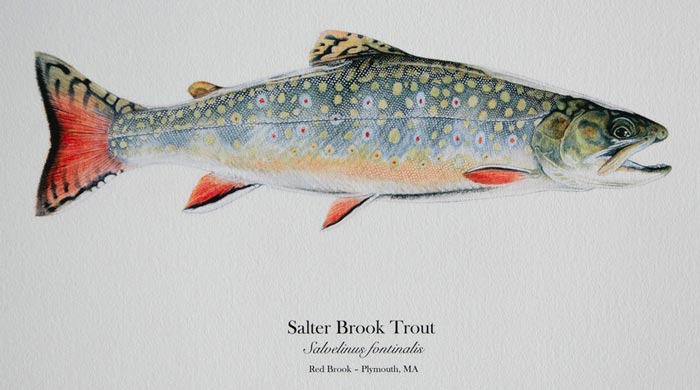 I grew up in Israel, which is about as far away as you can get from trout. My family is from Montana, and every summer we’d come home to visit. The brief few months that I had the opportunity to fly fish and marvel at the beauty and uniqueness of each trout caught would simmer in my mind for the next nine months in the Middle-Eastern desert. Most people who are familiar with my work will know me as a filmmaker [see below], but long before I picked up a camera I considered myself an illustrator and pursued that passion all the way to college, where I was accepted to the Rhode Island School Of Design on an almost entirely illustration based portfolio. My late teens and early twenties was a whirlwind of formative change, and when it came time to select a major, I chose film and video, and my fine art practice fell dormant for nearly a decade. 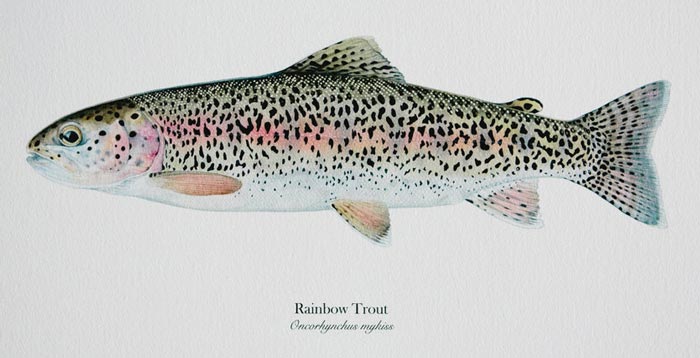 It wasn’t until meeting my wife, Aimee, who was an active artist that I rediscovered my love of illustration. Although I’ve always had a great love for gestural and visually abstract work, I could never break the habit of working in tedious and minute detail. The rhythms established in this kind of illustration are akin to the meditative practice of fly fishing itself. Scientific style illustration has a been a natural progression for my work to take. It’s been an interesting journey of rediscovery over the past few years, but I’m happy with where the work is taking me, and I’m excited for what the future will bring–both as a filmmaker and as a fine artist.

All of my recent scientific illustrations, in staying true to the genre, are painted from life. What that means is that each fish you see is an exact replica of the real thing. Every spot, fin ray, etc., is anatomically correct. While many scientific illustrators will choose a fish that is most representative of the species as a whole, I’ve simply chosen ones I thought were interesting and beautiful. The Yellowstone Cutthroat for example, came from Soda Butte Creek in Yellowstone National Park, were the fish often develop of a blue/gray tint, as opposed to the classic warm brown and tan. All fish were caught, photographed for reference, and released. Depending on the level of detail in each specimen, they can take anywhere from 40 to 100 hours to complete start to finish. I sketch the fish in pencil first, and lay the outline/shadow for every scale. I then add color in a series of watercolor glazes. Once the fish that taken form, and spots/identifying marks have been finished in watercolor, I go back in with an opaque gouache to highlight all the scales. The final step, and often the most tense, is hand lettering the fish’s name in pen and ink.

To see more of Chase’s work, or to buy originals and prints of the trout portraits, visit his website, Tight Loops. And check this space at a later date for a post about Aimee’s work, as well.

3 thoughts on “The Minute Detail of Artist Chase Bartee”