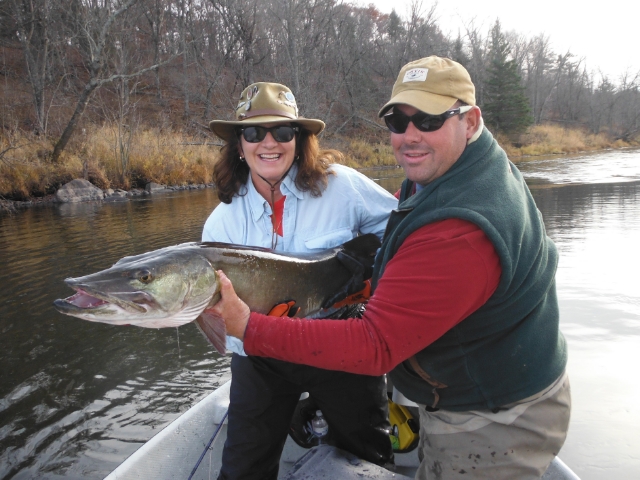 I share many fishing experiences with my husband, PJ. We fish most of the time on our own, but when it comes to hunting muskies, we usually get a guide. On our most recent trip, we went with Kip Veith from Wildwood Float Trips, in Monticello, Minnesota. He’s an experienced fly fisherman, knowledgeable about the river, and loves catching muskies and smallmouth bass.

I moved one musky in the morning, and we both moved a bunch of northern pike, which were too small for the large flies we were throwing. Mid-morning, PJ landed a nice musky. Now we were encouraged, but we didn’t land anything else until after lunch.

I switched flies to a size 4/0 Chartreuse El Chupacabra. A short distance downriver from our lunch spot, I threw into some wood and stripped in the line. After several casts among the fallen tree branches, my line stopped moving. PJ asked, “Is that a fish?” I said “I think I’m snagged.” I gave it a tug and the line tugged back—fish on!

As Kip and PJ will tell you, they felt the hook set. (I’ve only had to be told once how to make a proper hook set after losing a nice fish.) The next thing I saw was the swirl in the water. It was a musky. I kept the line tight, let it run a little, got the head up. and then guided the fish into the net. It was a nice, 37-inch musky, my personal best. Happy that I caught a fish and didn’t get skunked for the day, I returned to casting as we continued our float downriver.

The St. Croix River is lower then normal (due to this year’s long drought). Kip put us in a spot, toward the end of the day, where the water is still fairly deep and has held some big muskies. We worked the area pretty hard: I threw close to shore, along the seams, in the eddies behind a few large boulders, and along the dark water edges where it drops off into deeper water. On one of those retrieves, my line stopped moving again! I saw the fish turn in the water, so I set the hook (several times I’m told). He swam toward the boat, away from the boat and under the boat.

Kip gave PJ a look that said, “Do you see the size of that fish? Don’t freak Donna out.” Kip’s instructions to me were clear: give the fish some line as he runs, tighten your grip when he slows or turns, and then strip in line. I put the butt of the rod into my belly just like I’ve shown the kids when I’ve taught them to cast a fly rod and to fight a fish. At one point, the fish pulled our drift boat in circles.

When the time arrived (I thought) to get serious and land this fish, I stripped in line, only to have the fish go under the boat one more time. I flipped around to the other side of the boat while Kip grabbed the net. “Pick his head up,” he commanded. I did as I was instructed, but this fish wasn’t ready for the net, and down he went, once again under the boat. I stripped in more line, the rod was bent in half, but I stood my ground. Once more I pulled to get the head up, Kip reached out with the net, and my 46-inch musky was landed!

PJ let out a resounding “Yay!” with a double fist pump in the air, and I got a high-five and a hug from Kip. I was shaking. Wow! I could hardly hold on to the 25-pound slimy monster. It was so exciting! It was a long hard day of casting, but the wait was worth it. The pictures tell only part of the story. The grin on my face tells the rest!

Donna Smith is a sales associate at
Orvis Yorktown in Illinois.