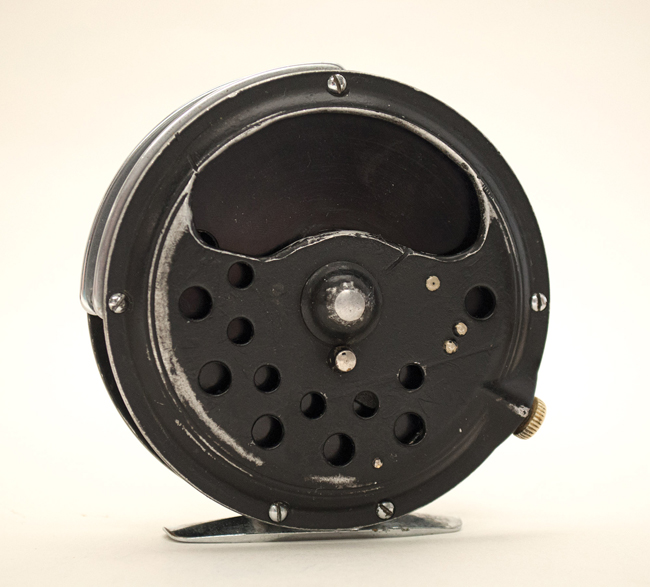 Lefty Kreh improved his line drag by cutting a thumb insert in his first fly reel, this Pflueger Medalist.
Photo by Sara Wilcox

Editor’s note: The American Museum of Fly Fishing is located right next to the Orvis Flagship store in Manchester, Vermont. The folks from the museum have shared many of the cool items from their collection in an ongoing series called “Museum Pieces.” You can take a little virtual walk through part of the museum at the bottom of this post.

In the photo above, you can see Lefty Kreh’s very first fly reel, purchased in 1947, the year Lefty discovered fly fishing while guiding legendary angler Joe Brooks. Here’s the story as he told it in a 2013 interview with Chris Wright for Gear Patrol:

In 1947 Joe Brooks, who was at this time writing for a tiny paper called The County Paper near Baltimore, called me up because I had a reputation as a hot dog fisherman. He came to fish with me and to write a column about it. At this point, I didn’t know anyone who was fly fishing. Joe Brooks came up, and when we got to the river he started putting this bamboo rod together — it was a fly rod, though I didn’t really know what that meant at the time — and he was sort of a regal type of person, not stuffy, but regal. I said, ‘Joe, if you don’t have a plug caster I’ll loan you one, the wind’s blowing 10 miles per hour’. So he borrowed a plug caster and caught a substantial amount of fish.

At lunchtime we were sitting on a ledge that slanted into the current. He walked up the ledge with his fly rod. Looking back, I now know there were flying ants trying to cross the river, and fish were rising, feeding on them. But at that point I had no idea what he was doing. He dropped a black and white fly into the middle of a rising fish’s ripples and hooked a fish. He did this 8 or 10 times in a row, every cast, and I thought, I have to have this. He picked a fiberglass rod for me the next day, and a Pflueger Medalist reel. He gave me my first fly casting lesson.