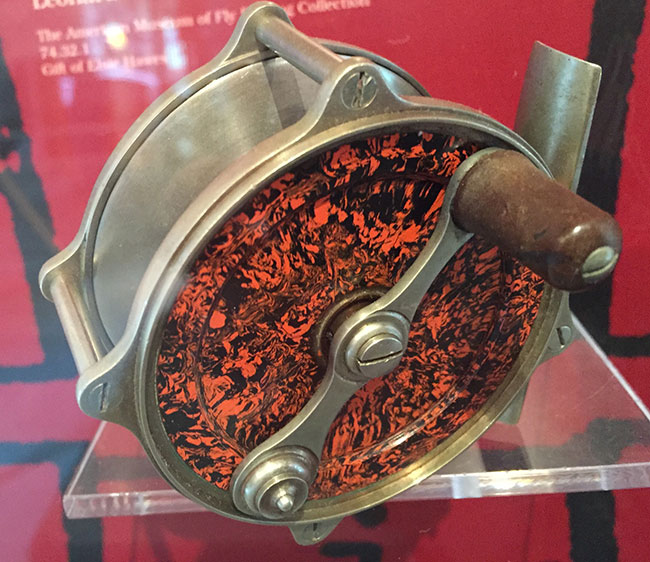 This reel would still look great on the water today.
Photos by Sara Wilcox

Many older trout reels are surprisingly small, built to hold thin diameter silk lines. Trout lines were often shorter than they are today because shooting the line for distance was not a common practice. Many of these reels are still in use today as “midge” or ultralight reels.

This rare Leonard reel features composition panels of dramatically swirling orange pigment against a black background, giving it the appearance of a reel that might have been made in the 1970’s and not the 1870’s. One of the advantages of the 1877 patent is a no-tangle handle design in which the handle travels within a formed rim. This improvement can be seen in nearly all Leonard reels.

An H.L. Leonard 6-strip rod, which became the standard for all others in its day.

If you were wondering…why, yes, that is the same H.L. Leonard who made fine bamboo rods. Leonard opened his Bangor, Maine, rod shop in 1871; this particular rod (above) is believed to have been among one of his first 6-strip models, which came to dominate American rodmaking for almost 50 years. This 1873 presentation rod, with cedar inlays in the grip, was build by Hiram Leonard for Bangor attorney H.H. Howells, who did patent work for Leonard. 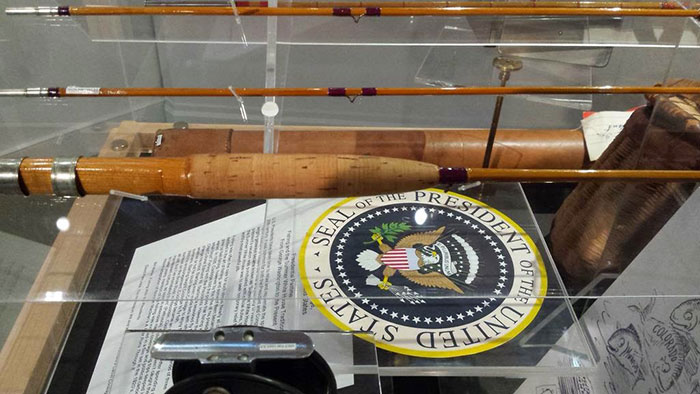 Silent Cal’s Leonard Baby Catskill rod is on display at the museum.

Leonard moved his operations from Maine to Central Valley, New York in 1881 where he further perfected his design. It was here that Leonard designed the famous “Catskill” rod series, which were the lightest rods available at the time. This example is a 7 foot “Baby Catskill” model belonging to President Calvin Coolidge.

One thought on “Museum Pieces: An H.L. Leonard Reel to Covet”