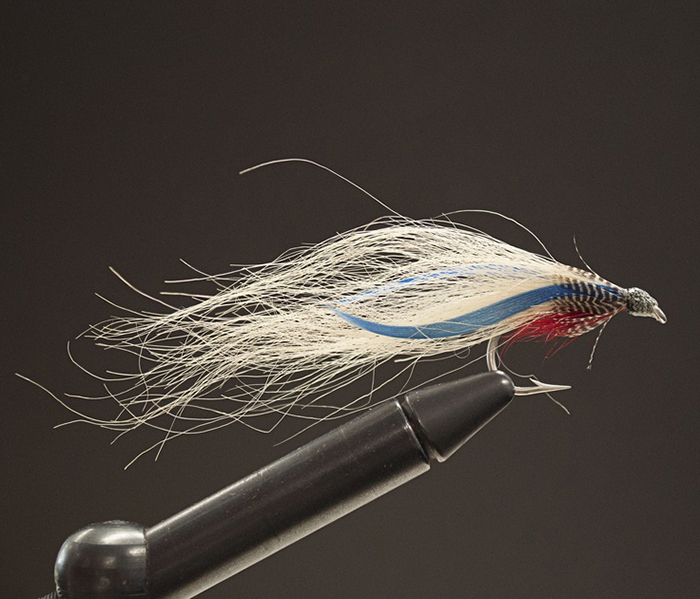 One of the first saltwater bucktails, the Gibbs Special is forefather of many modern striper flies.
Photo courtesy AMFF

To preface: This is not a list of the top five streamers ever. These are just a few fun patterns that have proven their worth over the years, and you can see all of them on display at the American Museum of Fly Fishing.

One for the Salt: Harold Gibbs Striper Bucktail
Harold Gibbs is considered the father of modern striper fishing in the Northeast. Originated in the 1940s, the Gibbs Bucktail (above) was one of the first attempts at suggesting a specific forage fish, the silverside. Lacking non-tarnishing flash material, Gibbs, a keen observer of marine life, keyed on the bluish-white tones cast by silversides in shallow water, and attempts replication with a combination of white (first capra hair, then bucktail) and blue (first a swan feather, later blue bucktail). Though it may not have been intentional, the stout, short-shank, round-bend hook tended to keep the weight forward, encouraging a subtle head-dipping movement between strips and also discouraged wing material fouling. The bass have been on the run ever since…each fall.

This is a timeless streamer pattern originally tied by Carrie Stevens of Rangeley, Maine. Stevens had fished with bait throughout her life, but on 1 July 1924, she decided it was time to create a fly of her own and test it in the Upper Dam pool. A friend, noted duck-decoy carver and angler Charles “Shang” Wheeler (1872–1949), had shared a streamer fly with Stevens in 1920. Wheeler tied the fly based on an English pattern, and he encouraged her to try her hand at the art.

On that particular day in 1924, Stevens resolved to simulate a smelt in the water, and she tied gray feathers onto a hook. She marched to the pool and began to cast, catching some salmon and trout. A little bit later she got a bite on her “Shang’s Go Get-um” streamer, struggled for about an hour, then landed a brook trout that weighed 6 pounds, 13 ounces, and measured 24.75 inches; Stevens’ brook trout was the largest taken in thirteen years at the Upper Dam pool. She entered her catch in an annual fishing contest held by Field & Stream magazine and took second place. The following year, in 1925, the magazine’s editor decided to publish Stevens’ written account of her trophy catch. The sentence “He was caught with a Thomas rod, nine feet in length, a Hardy reel, an Ideal line, and a fly I made myself” was read around the world. The fly she used for her trophy catch was incorrectly recorded as being a Gray Ghost, and orders for this fly began to arrive immediately.

The Gray Ghost was used for trolling and casting and imitated smelt, forage fish for the trout and landlocked salmon in the nearby rivers and lakes where her husband guided. It had the color of the then popular wet flies for brook trout but carried the Rangeley-style long, slim proportions to match the body shape of the smelt. The fly’s utility is wide-ranging, and it is my go-to pattern when fishing the rivers near the Wachusett Reservoir, where I’ve duped many a brown, rainbow, and brookie gorging on the massive population of smelt. 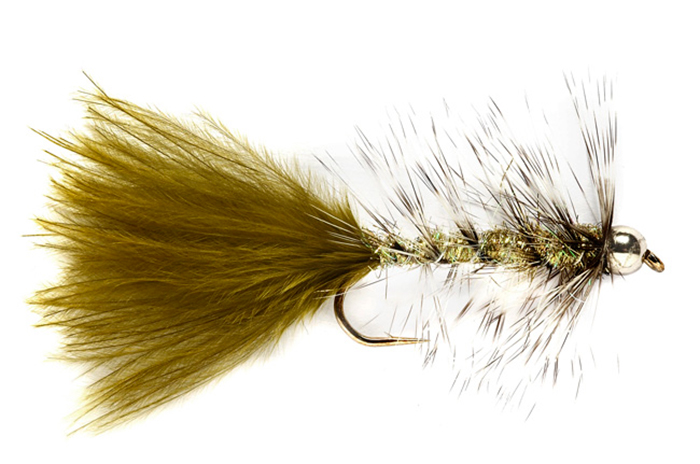 The Woolly Bugger may be the most productive fly of all time.
Photo courtesy AMFF

Want a pattern that will imitate any baitfish? Here you go, just choose white, black, orange, or olive. How about sculpin? Here’s a weighted head to get down in the water column, jig it with the best of them. Leech? Done. The Woolly Bugger and its many variations remains one of the fishiest flies ever created. There is rarely a trout, or bass… or… most any fish that will pass up this pattern. Check out this great interview with the son of Woolly Bugger originator, Russell Blessing. 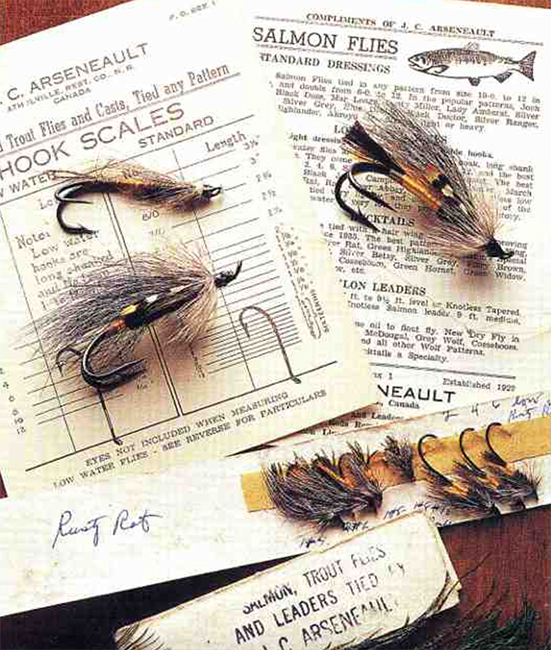 The Rusty Rat is a time-tested pattern in Eastern Canada.
Photo courtesy AMFF

Created through the collaborative efforts of Joseph Pulitzer II and local tyer J.C. Arsenault, the Rusty Rat has become a favorite on the famed salmon fisheries on the Restigouche and Miramichi Rivers in Canada. In the summer of 1949, Pulitzer was fishing one of Arsenault’s Black Rat’s when the fly’s rust-colored under binding was exposed after Pulitzer caught a few salmon throughout the day. Arsenault gives the account of what happened next:

As is often the case, the more disreputable the fly became in appearance the more alluring it must have been to the salmon for Mr. Pulitzer wound up with a 41-pounder. He came back to me excited about its performance and enthusiastic about its possibilities. He handed me what remained of the fly and told me he wanted it copied exactly. I got to work and after several tries produced a fly that pleased him, and immediately he named it the Rusty Rat. (excerpted from our Journal)

Pulitzer’s fishing log records the big catch on June 24, 1949, and in that year he and his wife, Liz, “together took 76 fish and of those 39 were taken on the Rusty Rat.” The success rate of the Rusty Rat is undisputed, and it continues to be one of the most renowned North American hairwing patterns. 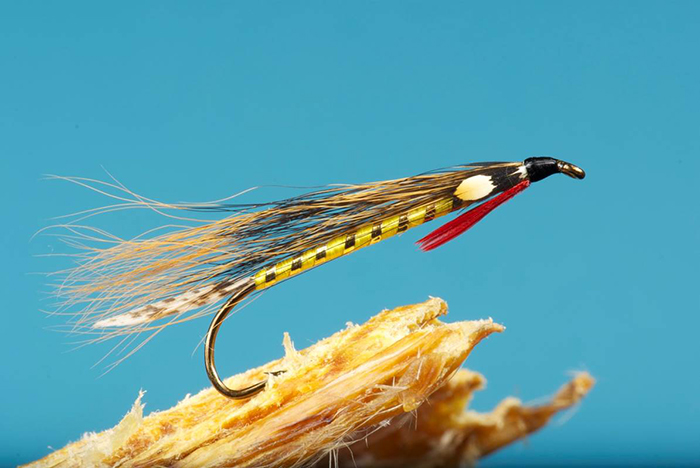 The late Lew Oatman’s pattern is a Battenkill staple for when the Hendricksons and Tricos are out of season. It is aptly named after Oatman’s fishing buddy, Al Prindle, who was. . .you guessed. . .the postmaster in Shushan, New York. Both were included on the famed “Liar’s Bench” at the Angler’s Nook in Shushan, which documented local fly-fishing legends but unfortunately has since been taken down and lost to history. You might recognize Al Prindle’s face not from photographs, but from Norman Rockwell’s Saturday Evening Post cover titled “Catching the Big One.”