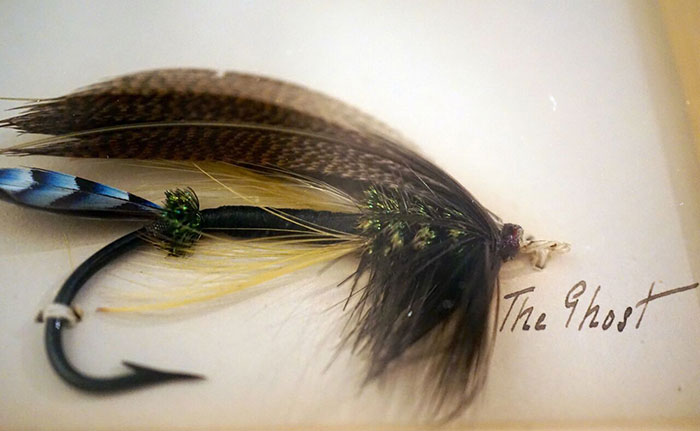 The Ghost, one of the beautifully dressed flies in Mary Orvis Marbury’s display from the 1893 Chicago World’s Fair.
Photos courtesy AMFF

In honor of All Hallow’s Eve, we have come up with a few historic fly patterns from our collection with some spooky monikers.

Lady of the Lake: “The Lady of the Lake is a comparatively new fly, originating in America. It is usually dressed large for deep waters. The name originally belonged to the Alexandra fly, but when it was abandoned for that fly in favor of the much-admired princess, it was appropriated for this new and dainty creation of the American fly-makers.” – Mary Orvis Marbury’s Favorite Flies and their Histories 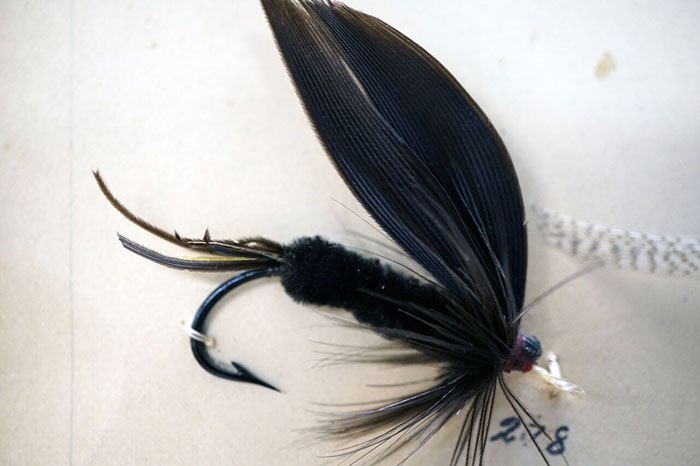 The Raven: “The Raven is a black bass fly much liked by the fishermen of La Crosse, Wis. From its success in that vicinity, it is becoming known and used by fishermen in other localities.” – Mary Orvis Marbury’s Favorite Flies and their Histories 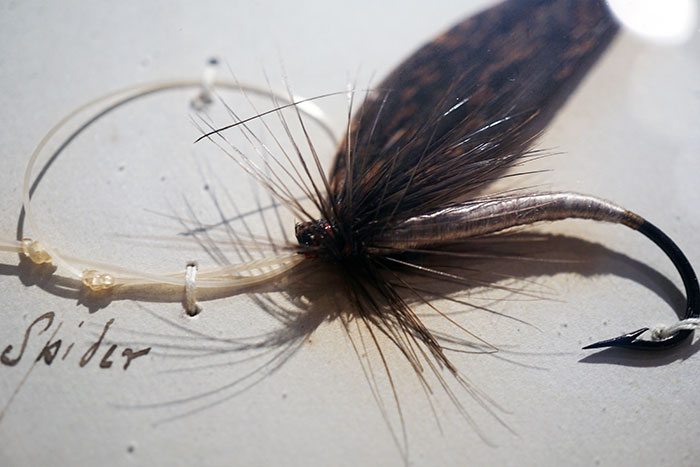 The Spider is an oddly named pattern, as it bears no resemblance to an arachnid.

The Spider (Streamer): Also from Favorite Flies and their Histories: “To our mind this is the poorest possible representation of a spider, and we can see no sufficient reason why that name should have been given to it; but the fact remains that it is called “the Spider”, and when made on the larger hooks is much liked for large trout, and sometimes for black bass.”

Mary Orvis Marbury clearly disapproved of the fact that it did not look like an actual spider and continued with this disclaimer: “It must be remembered that in these plates we are endeavoring to give the favorite flies, the general favorites; not those we admire as most beautiful, taking, or durable, but those that are most widely known and approved. The only criticism we can make in this regard is that it was named ‘the Spider’, but then Charles Dudley Warner has said: ‘The trout fly is a “conventionalized” creation, as we say of ornamentation. The theory is that, fly fishing being a high art, the fly must not be a tame imitation of nature, but an artistic suggestion of it.'” 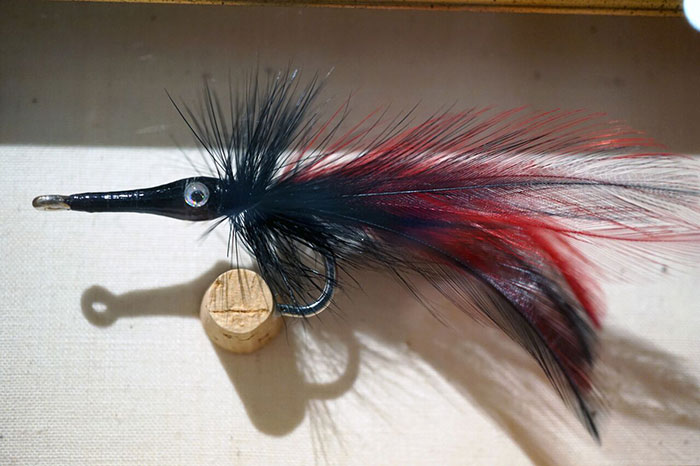 The Black Death has a dramatic name but is quite lifelike in the water.

The Black Death: This tarpon fly in the AMFF’s collection was tied by the late George Hommell, Jr., former owner of the World Wide Sportsman and legendary Florida fishing guide. It has an elongated tapered head design that provides little wind resistance on long casts while at the same time the contrasting colored tailing materials seem to make this fly come alive in the water. The Black Death can be tied in two separate styles: the first combines multiple saddle hackles and marabou, while the second uses rabbit strips. Both patterns can be used on the shallow water flats and the action is comparable between the different materials. Check out this tying video for The Black Death with ambient sounds of landing tarpon in the background. 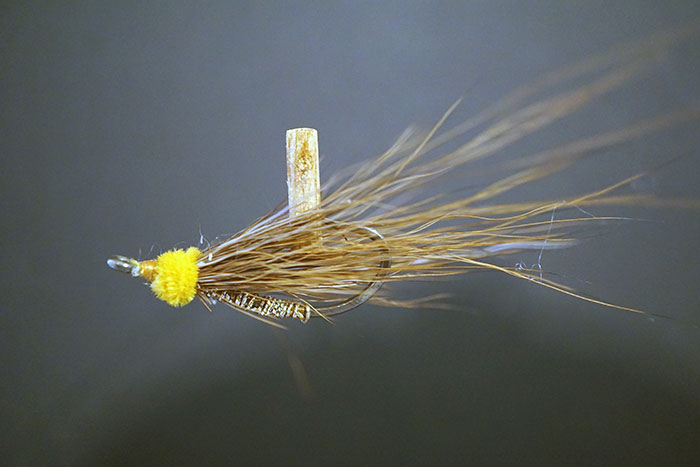 The Horror got its name from an unusual source.

The Horror: The Director of the Bermuda Fishing Information Bureau, Pete Perinchief, designed The Horror pattern in the 1950s after a frustrating trip to the Florida Keys with Joe and Mary Brooks. Fishing for deep-cruising bones, Brooks had told Perinchief to let his fly sink to the bottom and wait for the fish to find it, but Perinchief’s fly continually snagged in the turtle grass. Frustration produced an aha! moment that night. Perinchief woke the next morning, tied a fly with the wing on the reverse side of the hook shank, and dropped it into the bathtub to test. The Horror was born.

While the pattern won’t win awards for its presentation, it is deceptively effective. The wing of brown bucktail works like a rudder to keep the hook point up, acting as a weed guard. A wrap of large yellow or orange chenille tied closely behind the wing base forces the fibers upward, which also shields the hook point. The chenille is then wrapped forward to the rear of the normal head space. Soon, most bonefish patterns were tied with the hook point up.

But what’s in a name? The Horror did not get its title from the look of the fly or the havoc it wreaked on unsuspecting fish. It was affectionately named for Pete’s daughter, who was so nicknamed because of her behavior as a child and teenager.

Some other names and effective patterns out there with a Halloween twist include the Black Demon, Blue Devil, Copper Killer, Golden Demon, Psycho Debutant (style points for that one), Phantom, Sorceror, Spirit Catcher, Werewolf, and The Prowler. Which one is your favorite?