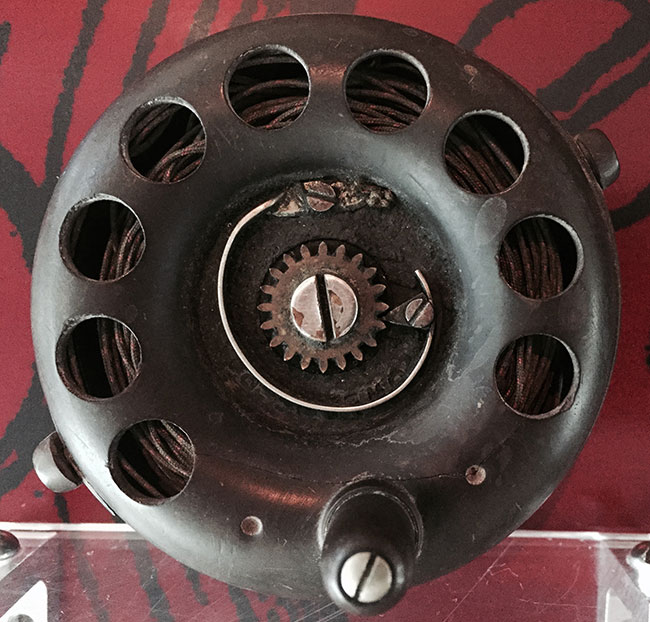 A vulcanized-rubber fly reel? This seemed like a good idea in the 1870s.
Photos courtesy AMFF

“Gentleman, I take pleasure in adding my certificate in favor of your teeth. They are without fault. Dr. A.H. Fowler, Ithica, [sp] New York.” – Dental Times Quarterly, 1864 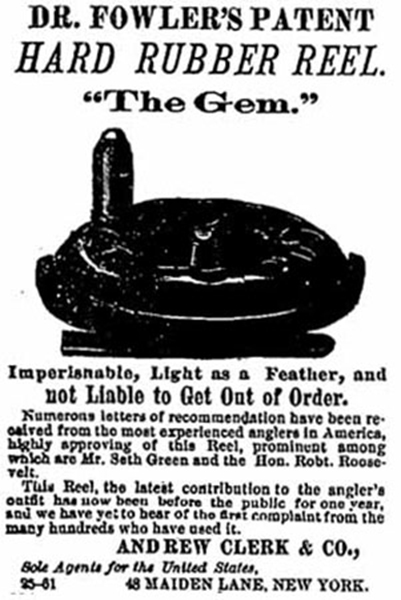 Dr. Alonzo Fowler (1825-1903) carries the interesting distinction of being the only man to run magazine ads for dentures and fly-fishing equipment. The dentist from upstate New York began making vulcanized rubber reels in the early 1870’s using the molding technology from his profession. Charles Goodyear had discovered the vulcanization process in 1853, so it was still a relatively new way to cure rubber and inventive people such as Fowler sought to expand its uses to the tackle industry.

Though they were heralded as “imperishable, light as a feather, and not liable to get out of order” in advertisements, the Fowler reels proved to be very fragile, and few exist today. The “Fowler Gem” was released around 1872 in trout and bass sizes, using a center screw to apply pressure between the spool and the rim, creating a drag or spool stop, as described in the patent. Sorting through early production hiccups, Fowler put out an advertisement in an 1874 issue of Field & Stream magazine assuring the public that all reels would be hand-inspected by the inventor for quality assurance going forward. 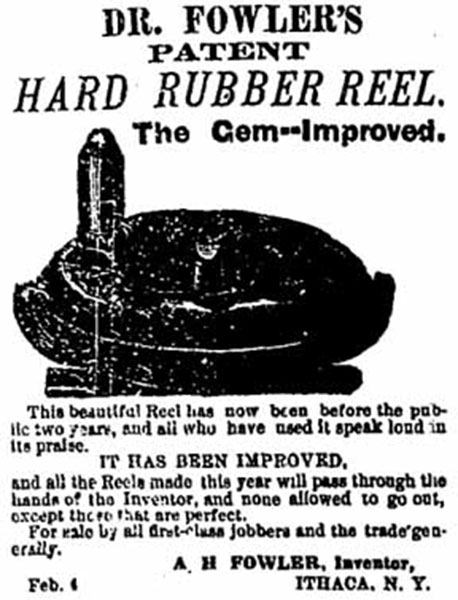 The “Improved Gem” came out the next year, in 1875, featuring an external click pawl with fastened screws, replacing the butterfly screw. The Improved Gem did not last too long either; however, Dr. Fowler did set an important precedent that future reel makers improved upon. That is a common theme in the Museum’s collection: many times we see that elements of an invention that was not successful are turned into gold by someone else who tweaks and incorporates their own elements in the design. Often these are not people who have commercial interests; rather they often stumble on a great improvement by dissecting the reel and trying to find a way to make it work more to their preference. Don’t worry about Dr. Alonzo Fowler, though, as he had plenty of success in the dentistry industry and turned his focus to rod building. He was one of the earliest proponents of the six-strip design for bamboo fly rods.