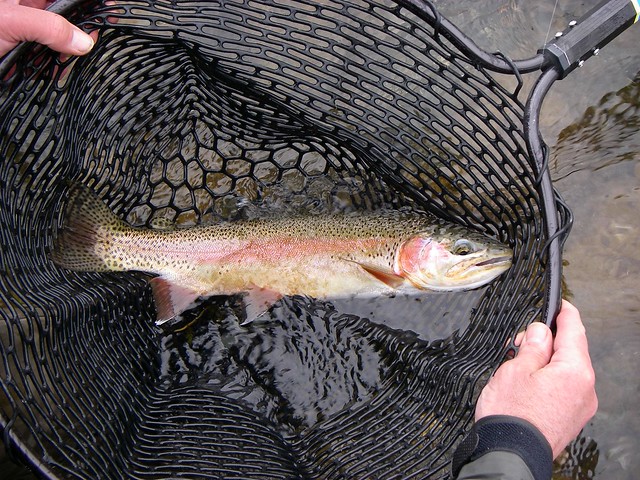 We are very fortunate in Colorado that we have the opportunity to fish 365 days a year. And though we are now in December and it’s probably time to put away that hopper box until next summer, don’t think that there aren’t plenty of fishing opportunities throughout the state. In particular, tailwaters—or sections of river below a dam or reservoir—offer your best chance during these winter months. Oftentimes, these sections do offer some specific technical challenges, but their relatively consistent water temperatures and food sources lend themselves to fish that are hungry, big, and willing to eat your fly! Notable winter tailwaters in Colorado include the South Platte—below Spinney Mountain Reservoir, below Cheesman Reservoir, and in the Deckers area—the Big Thompson River, the Blue River, the Frying Pan River, the Yampa River, and the Taylor River.

When Trouts Fly Fishing Outfitting Manager, Dave Lovell, was asked about his favorite winter flies, he said with a smile, “I keep my winter fly selection pretty simple: give me a few different flavors of a few key seasonal food sources—such as the midge and Baetis—and I’m ready to hit the water with confidence. Even more important than your fly selection is maintaining that drag-free drift and set to everything. Don’t over-think it!” As Dave is quick to point out, maintaining a good presentation has a greater influence on the fish than specific fly selection. At any point, there are generally a number of flies that a fish will be willing to eat, but even the most perfectly selected fly is useless if the drift is sloppy or unnatural.

That said, the Trouts team has assembled a handful of their favorite “must have” flies to keep on hand through these chilly months. Though there is no shortage of fantastic flies that work, our guides have compiled a basic list of patterns that we will almost always have on the water, November through February.

Must Have Flies: Winter Edition

Below is our list of seasonal flies for the winter months. You will certainly notice these flies are all on the smaller side and only simulate a couple food sources, but that is the nature of the beast when it comes to fly fishing in winter.

“Without a doubt, one of the best flies for the winter is the zebra midge. When the water turns cooler, the the majority of mayflies and caddisflies cease activity, which leaves the midge as the trout’s go-to meal. Pound-for-pound in the ecosystem, midges make up the main food source. The Zebra Midge is simple and sparse by design. It is nothing more than a thread body of varying colors, and I like it best with a tungsten bead. The bead is the secret. Tungsten sinks three times quicker than brass, and that added density is great in low flows allowing you to use less split shot. This fly is my favorite to fish behind an egg any time of the day. Carry this fly in olive, black, and red colors and you will be well rewarded.” – Chris Barry

“The Tungsten Zebra Midge is one of favorite winter flies. I fish them all up and down the South Platte during the winter months. Day after day, seeing our customers pull nice fish out of some of the deeper, slower pools has made me a believer in this fly. I usually fish it in a black or rust color, in size 20, and tie it on as dropper at the bottom of my nymph rig. That extra weight at the end helps get it down to where it needs to be.” – Scott Dickson

“With midges being a staple food item throughout the year and especially in the colder months, I can’t think of a better pattern to have in my fly box than the Juju. I prefer olive, red, and zebra patterns, and I find great success using this fly in late fall through early spring.” -Dave Lovell

“I fish various egg patterns at some point every day I’m on the water September through April—pretty much regardless of location. When using a double nymph rig, I like to put the egg on as my first fly, and drop a smaller, more natural imitation, like a midge or Baetis, behind it as my second fly. The trick is to use enough weight to get the fly down in the water column, since fish tend to hold close to the bottom this time of year. Love ’em or hate ’em, the egg works!”- Reid Baker

“I love fishing small Pheasant Tails during the winter. Most times I’ll run a size 20 or 22 behind an egg, worm, or some other attractor. Sometimes I like them with tungsten, brass, or red glass beads, but more often than not, with the lows flows of winter, I’m a huge fan of the regular old Pheasant Tail without one. Its a great fly that I’ll fish on the South Platte, the Blue, and just about any other river I can get on.” – Scott Dickson

“If I could only fish one dry-fly pattern for the rest of my life, I’d take a Parachute Adams everyday and twice on Sunday. This pattern for me produces better than any dry fly I’ve used. This simple tried-and-true bug has fooled fish worldwide and is a great fly for taking some very nice fish during the cold weather months when trout are surface-feeding on midges or the sporadic Baetis.”- Dave Lovell

“I like the Rainbow Warrior because the tungsten head gets the fly down quickly, and the flash grabs the fish’s attention. I find it works best as a Baetis emerger, though I think a fish will sometimes eat it as a midge pupa. Though it catches fish all over, it is my go-to fly when I’m on the Blue River, and when I make it out to the Roaring Fork or lower Frying Pan between now and spring. If water is low and clear or fish are spooky, I may opt for a less flashy fly, but there’s always a handful of Rainbow Warriors in my box during these months.” -Reid Baker

“When conditions are right, you can usually see fish rising to the surface in the warmest parts of the day, as sparse hatches of midges or Baetis come off. This offers anglers a great opportunity to change to a dry-fly setup. One of my favorite dry flies when fishing tailwaters in the winter is the Brooks’ Sprout Midge. Though the fly is small and more difficult to see, I usually have my guests fish these flies in the long, slow, flat tailouts below riffles—where you are most likely to see fish rising in winter . Second, the glassy water makes the slow, delicate sips of feeding fish stand out significantly more. If anglers are still having a tough time, I will drop this 12 to 18 inches behind a more visible dry fly, like the Parachute Adams, to help track the flies and drift.”- Reid Baker

“The WD-40 was created for the Frying Pan River back in the 80′s and has since become one of my favorite emergers of all time. I fish this fly on every tailwater with great success in winter. The natural midge emerger is slender and sparse, and so is the WD-40. It mimics the midge trapped in the transitional phase where it is helpless in the river and easy pickings for a feeding trout. I will often fish the fly below a small dry for those sipping fish that are in the very soft water. Since it doesn’t have a bead, it is very light, so it won’t pull down the dry fly. I like it best without any flash, especially when it comes to highly pressured and wary trout. The curved hook gives the profile a more natural representation. Best of all, the beauty of the WD-40 is that it could be a midge or a BWO which is great, since those two insects overlap during winter hatches.I carry gray, black, and olive for colors.”- Chris Barry

Trouts Fly Fishing is an Orvis-endorsed fly-fishing outfitter based in Denver, Colorado.