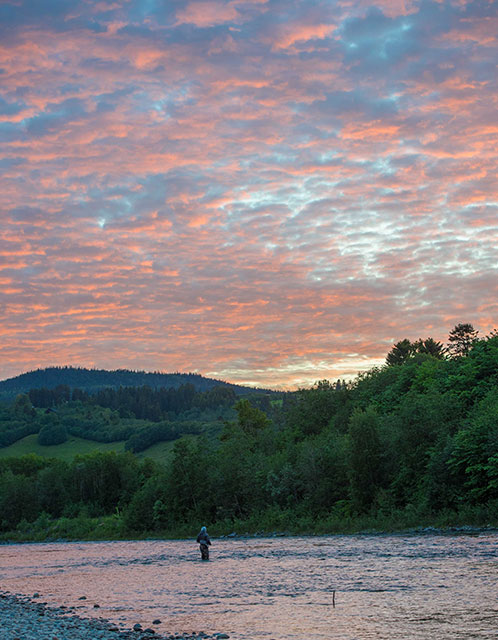 The “sunset” at 11:30 p.m. silhouettes an angler on Norway’s Gaula River.
Photos by Sandy Hays

Greetings from Norway, on the banks of the Gaula River(pronounced GOW-la). My friend, Sandy Hays, and I hopped a flight out of Newark on Saturday evening and landed in Trondheim the next morning. The hour-long drive south to the Norwegian Flyfishers Club was beautiful, as the road first took us along the coast of Trondheimsfjord and then down the stunning Gaula Valley. Summer in Norway is short, but everything is incredibly green right now, from the hay fields to the conifer-covered mountains. 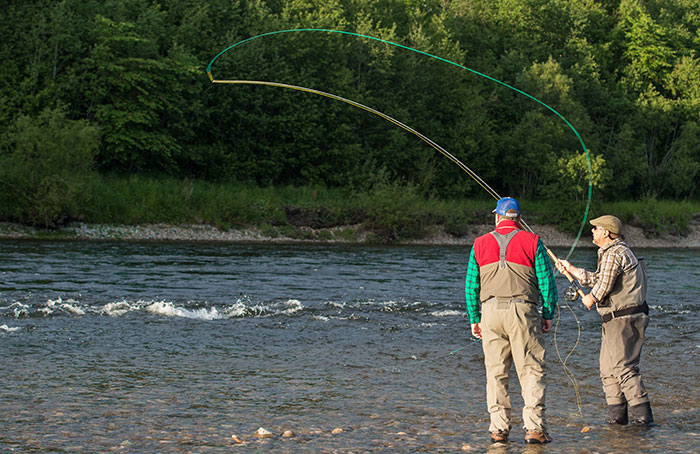 Guide Alessio Falorni demonstrates how to make a Scandi cast, while I try to figure out how
he does it so smoothly and effortlessy.

We arrived at the club, which is a very cool building with a turf roof right on the river, in time for a late lunch, which was followed by a much needed nap. After dinner, we headed downstream for our first fishing experience on the famed Gaula, known for its very large salmon.

Although I had had the best intentions of practicing my two-handed casting all spring, it was difficult to trade actual fishing time for casting practice. As a result, I arrived on the Gaula a rank novice at casting heavy sinking tips with a two-handed rod. Our guide, an Italian salmon nut named Alessio Falorni, gave me a few minutes of instruction and then left me to work on my Scandi cast. Right off the bat, I was a hot mess, but I was soon able to get the tube fly out to a fishable distance.

Per Arneberg (left) and John Bleh work a run, hoping for a tug.

We fished until midnight—it stays light twenty-four hours a day this time of year—but didn’t hook a salmon. My casting, however, improved immensely, and I was raring to go for Day 2.

This morning, Alessio took us to a glorious long pool downstream from the lodge, and this time instead of using his Scandi set-up, I broke out the rod I’d brought, a 14-foot 9-weight Clearwater Spey Rod. Rigged with a Skagit line and a sinking Poly Leader, it had a more familiar action than the setup from the previous night. This allowed me to do a double-Spey cast, which is less timing-dependent than the Scandi cast, and soon I felt pretty good about how I was booming it out. We still haven’t caught a fish, but I feel like I’ll have the casts down when they are ready to bite. 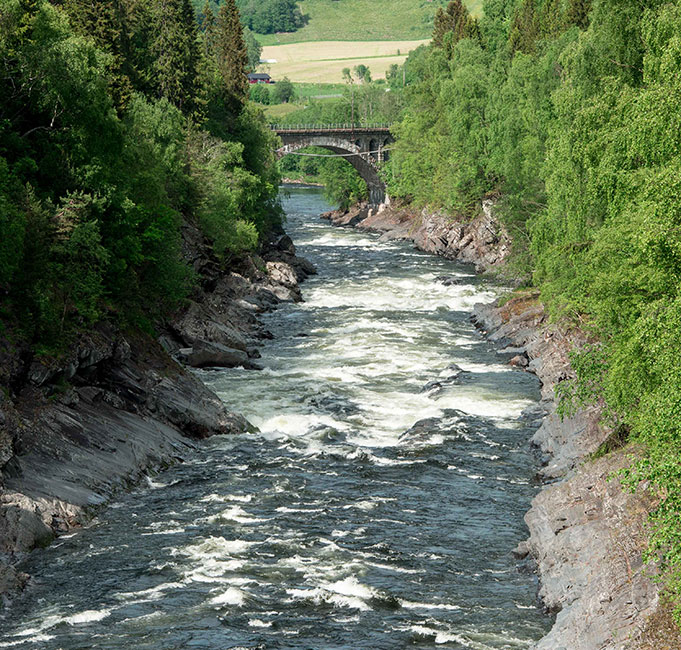 The Gaulfossen is a long chute/rapid that serves as a barrier to migrating salmon when the water is high.

We have two more sessions today, so check back tomorrow to see if we hook up!

5 thoughts on “Norway, Days 1 and 2: Getting into the Swing of Things”