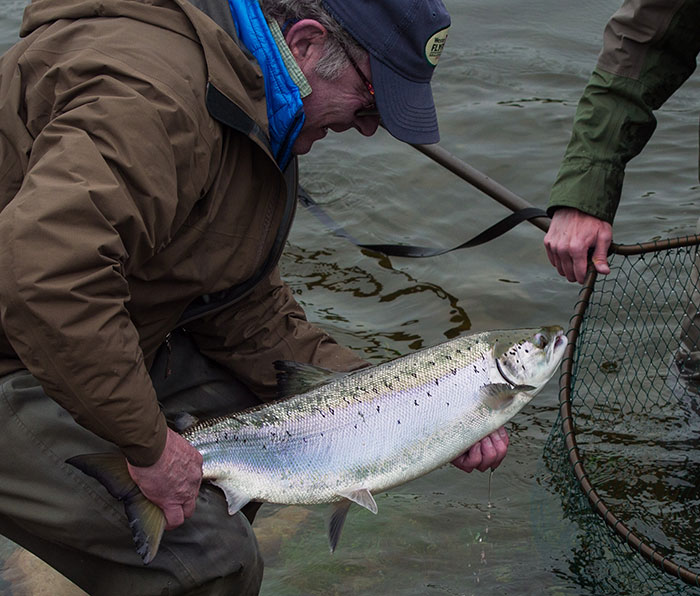 John Hoagland cradles the first fish of the week, a chrome beauty fresh from the sea.
Photo by Sandy Hays

On our first day at the Norwegian Flyfisher’s Club, we were talking about catch rates and such, and general manager Enrico Cristiani described fly-fishing for Atlantic salmon as a “team sport.” When a group of anglers is at the lodge, he explained they are all fishing different beats on the river, and you never know which beat will produce fish on a given day. Luck and timing play such important roles that everyone should celebrate each fish caught, no matter who caught it. 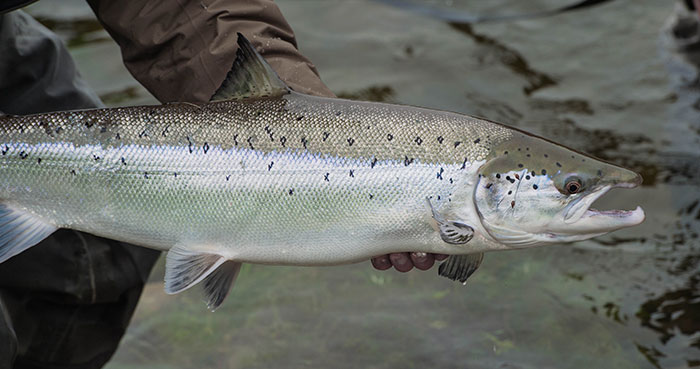 The silver bullet had plenty of sea lice on it, so it had been in the river for only a few hours.
Photo by Phil Monahan

Yesterday was the first day this season in which no one at the lodge caught a salmon. A rain storm in the mountain headwaters of the Bua River upstream sent a slug of muddy water into the Gaula, pretty much ruining our evening session. Back at the lodge, no one seemed overly concerned about the fishless day, but you got the sense that everyone was anticipating that first fish–caught by anyone—to give us all hope that our hundreds or thousands of casts would soon produce success. 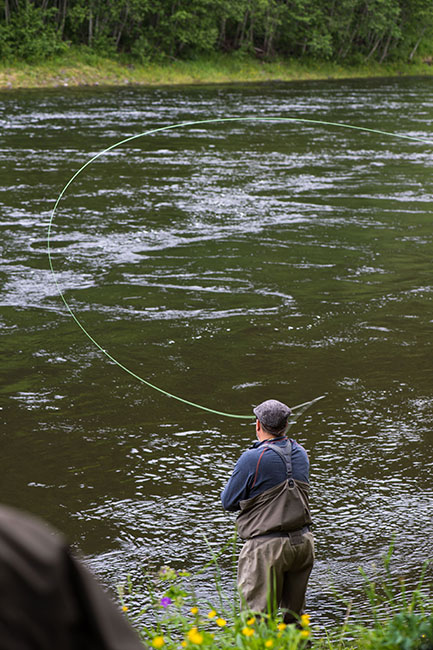 Working on my snap-C.
Photo by Sandy Hays

This morning, the river was still high, and the beat that Sandy and I were fishing presented some tough challenges: the stretch was impossible to wade, and you had to cast over a large eddy to get your fly into the main current. Because the water was deep, I had 15 feet of T-14 at the end of my line, adding to the degree of difficulty. Just getting that heavy line out of the water to start the cast required a straight-downstream roll cast. I eventually settled into a rhythm of roll-cast, snap-C, backhand forward cast.

Suddenly, Alessio’s phone “rang.” (His ringtone is actually a screaming salmon reel.) Word came that an angler just downstream, an angler was fighting a salmon. We raced to the beat just below our, where we found John, of Salt Lake City, with this long Spey rod sharply bent. His guide, Thies Reimers, had the net out and talked John through the process. 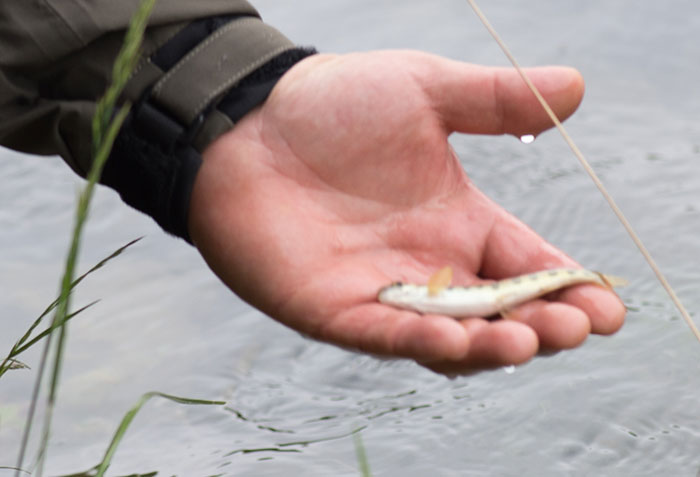 Our day was not entirely unproductive, as Alessio hooked this salmon smolt on a fly almost as large as the fish.
Photo by Sandy Hays

By the time Thies had the net under the fish, John looked tired but elated. The salmon was not large, about 10 pounds, but it represented the first for the team. And when we returned to the lodge for lunch and learned that another angler, a Canadian named Paul, had also caught a fish, everyone was excited to get back out on the water. Clearly, the fish were in, and they were biting.

As I type, word comes in that another fish was caught on one of the lower beats, closest to the ocean. The whole gang is heading down there tonight, where we hope to intercept more incoming fish. Check back tomorrow to see how we do.

Click here for “Norway, Days 1 and 2: Getting into the Swing of Things”.