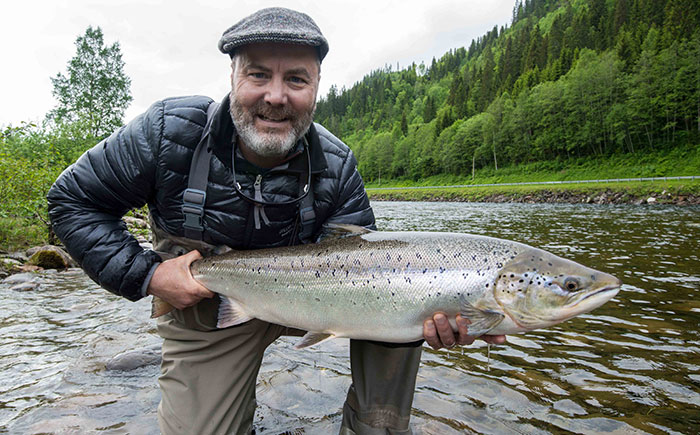 This 20-pound Gaula Atlantic salmon was a great reward on the first cast of Day 4.
Photos by Sandy Hays

After three fish were caught by anglers in our group during the first two sessions yesterday, Sandy and I were raring to go when we headed down to the lower beats on the Gaula, closest to the ocean, after dinner. The plan was to get in some fishing, and everyone else would arrive around 11 p.m. for a bonfire and a weenie roast. 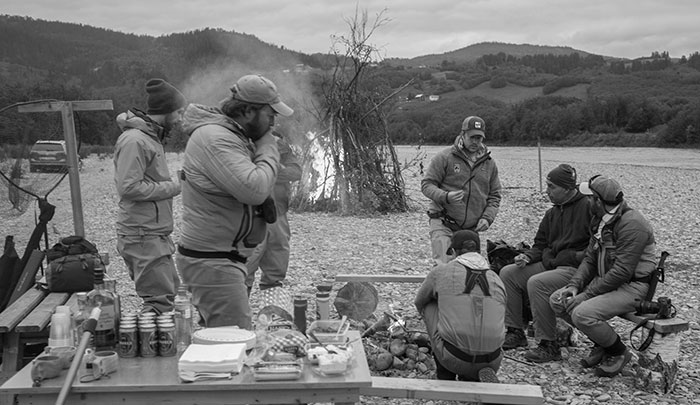 A big bonfire and a weenie roast at 11 p.m. on the banks of the river was a great end to Day 3.

The fishing didn’t produce any salmon, but the party on the riverbank was a lot of fun. It’s been a long time since I impaled a hot dog on a stick and cooked it over an open fire, and Per Arneberg explained to us that the “real” Norwegian way to eat it was to wrap the cooked dog in a lefse (kind of like a tortilla), add crispy onions and then either potato salad or shrimp salad. I went for the potato salad, which was really quite tasty. The shrimp salad looked disturbingly pink, but Taylor Edrington went for both salads on his dog, and declared the combination palatable. 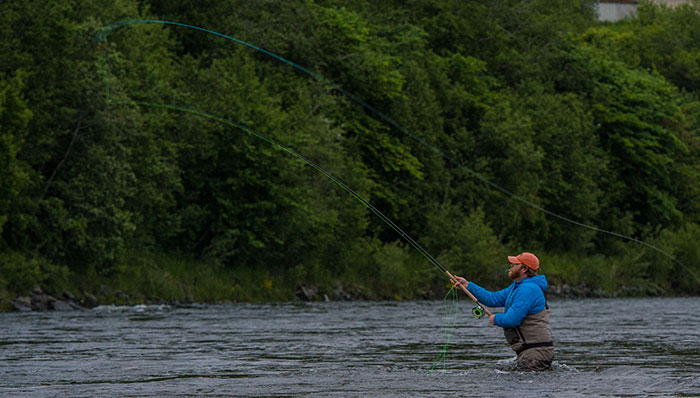 Justin Miller booms out a nice cast on a lower beat of the Gaula.

This morning, we were assigned beat BS1, the highest beat that the Norwegian Flyfisher’s Club leases. Alessio was curious to see if the fish had made it that far upstream in any numbers. I waded in behind a small boulder just below a riffle and threw out what was sure to be the first of hundreds of casts. As the fly swung through the inside seam of the current, it simply stopped. There was no tug or sharp strike. So I did what Alessio had trained us to do: nothing. 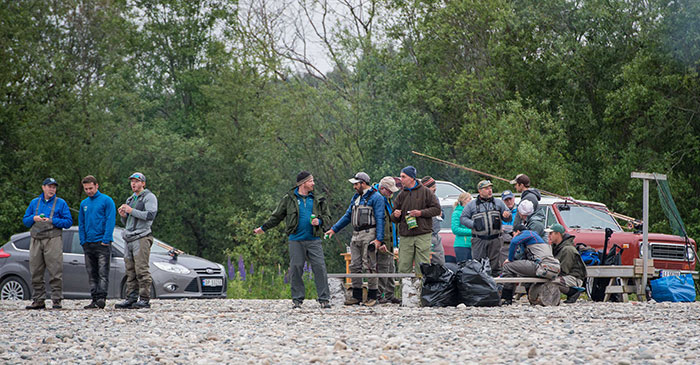 Lots of fishing tales get told in situations like these.

Then, as the belly of line bulged downstream, a bright fish rolled on the surface, and I set the hook. After thousands of casts over three days, I was finally hooked up to an Atlantic salmon. The fish immediately peeled off all the line and about 100 feet of backing, as it headed for the deeper water on the other side of the main current. A 15-minute fight ensued, during which I brought the fish nearly to Alessio three times, before he finally got a net under it. 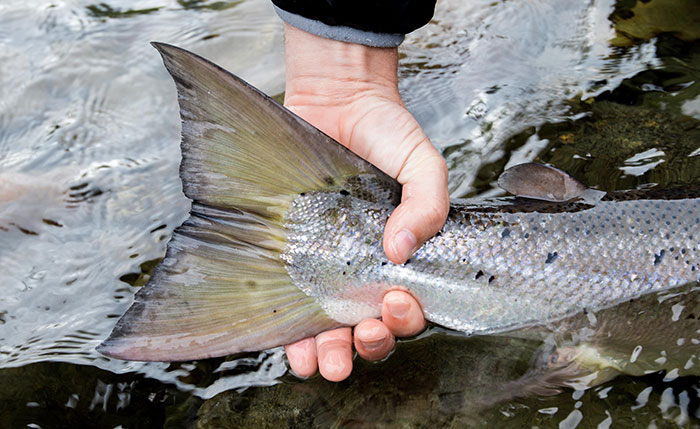 The fat tail of my first Norwegian salmon. . . .

Suddenly, all that casting and frustration of learning to handle the two-handed rod and heavy tips seemed so worth it. The fish was gorgeous, a bit over 20 pounds, and chrome-bright. This was the fish I had come to Norway to catch, and I was buzzing with adenaline. After a few photos, we released it to complete the journey upstream.

As it swam away, I felt a mix of emotion: elation, relief, awe, and more. Not to be greedy or anything, but now I want another one. . . . Time to get casting again.

Norway, Days 1 and 2: Getting into the Swing of Things.