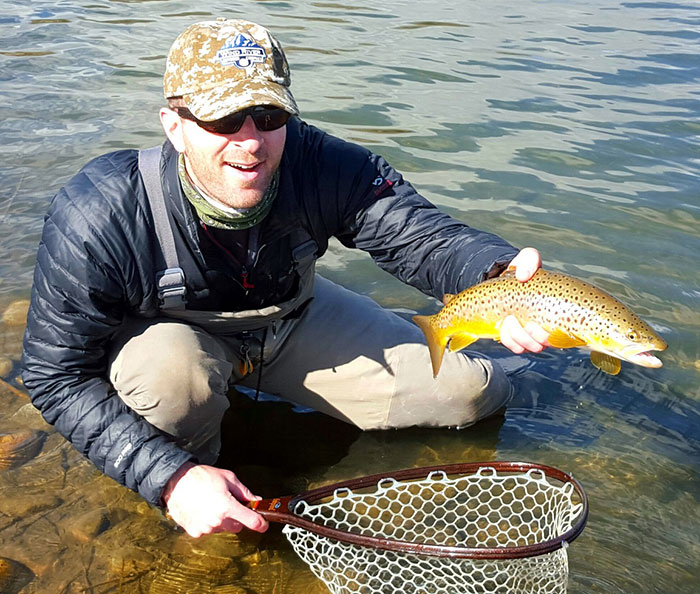 My home state of Wyoming has just a shade over five hundred thousand permanent residents. In my mind, that’s a beautiful thing. While it lacks an abundance of people, it is overflowing with high mountain peaks and the trout filled watersheds that they create. After surviving the bulk of another cold and windy Cheyenne winter, I was more than ready to get out on the water. Time on the water is always a blessing, but that same time shared with a friend is a true gift. 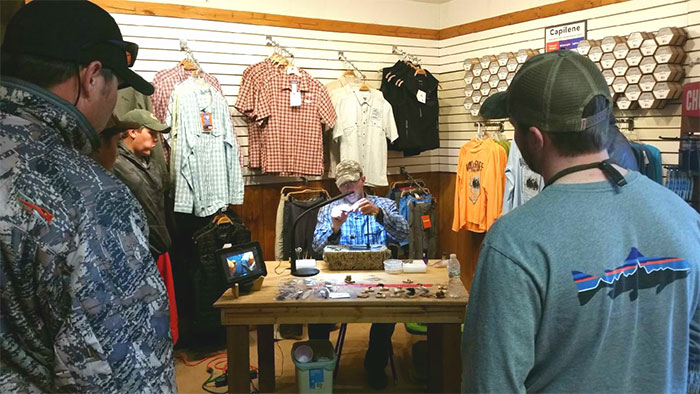 Bob ties the flies that will produce fish the next day.

I spent this last weekend in the area of Lander and Thermopolis, Wyoming. Paul Collamer of the Wind River Canyon Fly Shop was nice enough to invite me up to do a tying demo for his Spring Ice Off event. On Saturday, I tied up some of my Masked Bandits, Fusion Nymphs, and Beefcake Beetles during the morning and evening sessions. In between these sessions on Saturday, my friend Josh and I spent our time fishing in the Wind River Canyon below Boysen Reservoir. In a rare twist of events, the Wyoming wind decided to stay away and the sun managed to share some of its warmth with us. Fishing was slow for the first part of the day, but things picked up nicely when afternoon rolled around. 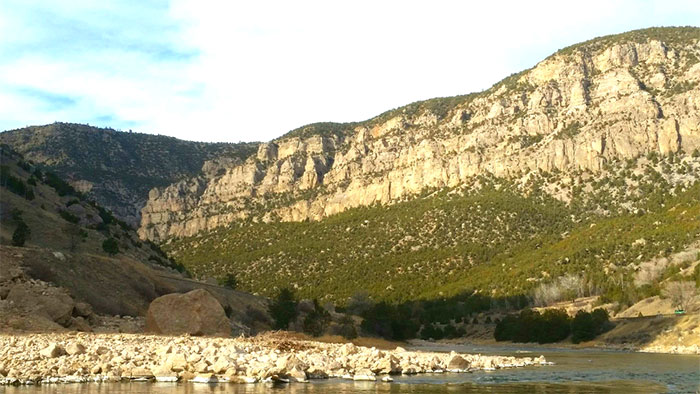 The Wind River Canyon below Boysen Reservoir. There were just two other people on the water . . .on a Saturday.

After a good night’s sleep and a plate full of eggs and sausage, we headed out for a Sunday of fishing. We chose a smaller freestone stream close to Lander. Once again, we were blessed with unusually temperate weather and the warmth of a long-absent sun. Josh is fairly new to fly fishing, but by the smooth nature of his cast you would never guess it. He’s spent the vast majority of his time on the water fishing streamers. Having listened to a presentation on nymph rigging methods the night before, we decided to spend the day drifting bugs under an indicator. After some quick tips and instruction on a couple new knots, Josh took the lesson and flat out ran with it. He quickly extracted two chunky rainbows from the first run. 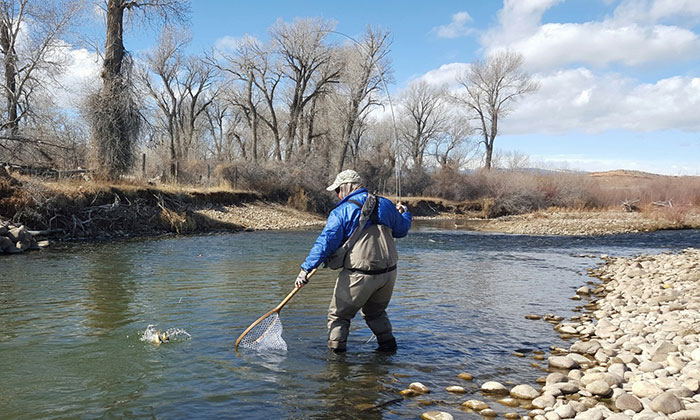 Josh nets his first nymphed-up fish of the day.

I moved ahead to the next pool. He soon joined me, and we continued to talk while I hooked into several fish, including my first mountain whitefish and a healthy, colored-up brown. Josh took his turn on the next riffle, and I was blessed to witness something wonderful. As I sat on an elevated bank, I watched him land two fish on his first two casts. The smile on his face began to grown, and he started to laugh. He looked up at me and said, “I had no idea fly fishing could be this fun.” He turned back to the water, and on his third cast he managed to hook and land a finely proportioned brown trout just over twenty inches. 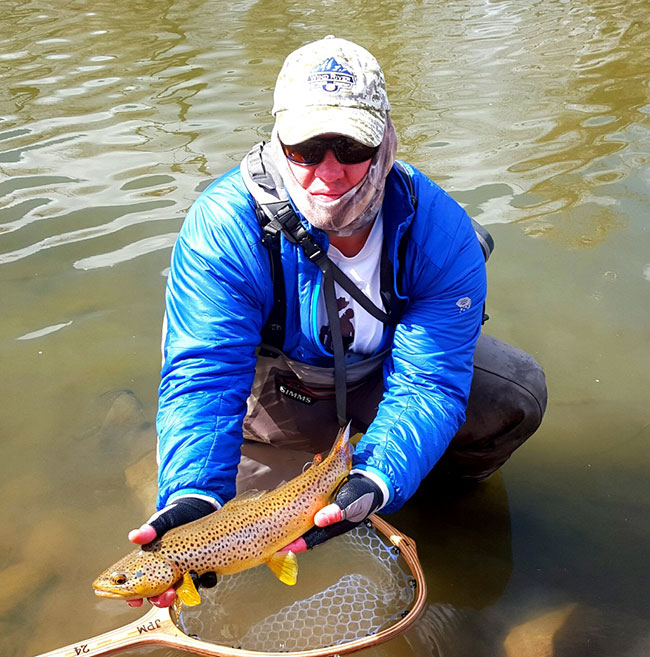 Josh shows off his big fish of the day.

I’ve seen countless fish caught over the years that I’ve spent on the water. Yet that fish and morning will stay with me forever. Watching my best friend since childhood experience the true joy of fly fishing was priceless. We are already planning our next trip to the backcountry regions of our vast and empty state. Next up, dry-fly techniques. 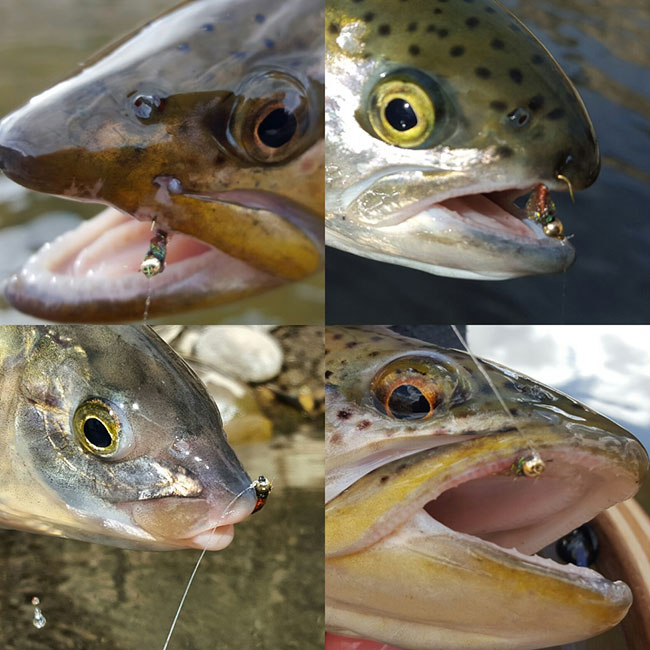 Here are just a few of the many fish caught on Reece’s Fusion Nymph.

Bob Reece is a junior-high science teacher from Cheyenne, Wyoming, who spends his summer guiding for North Park Anglers in Walden, Colorado. He also works with the Cheyenne branch of Project Healing Waters and runs a fly-fishing club for 7th and 8th grade students at the school where he works. He’s also a former Trout Bum of the Week. 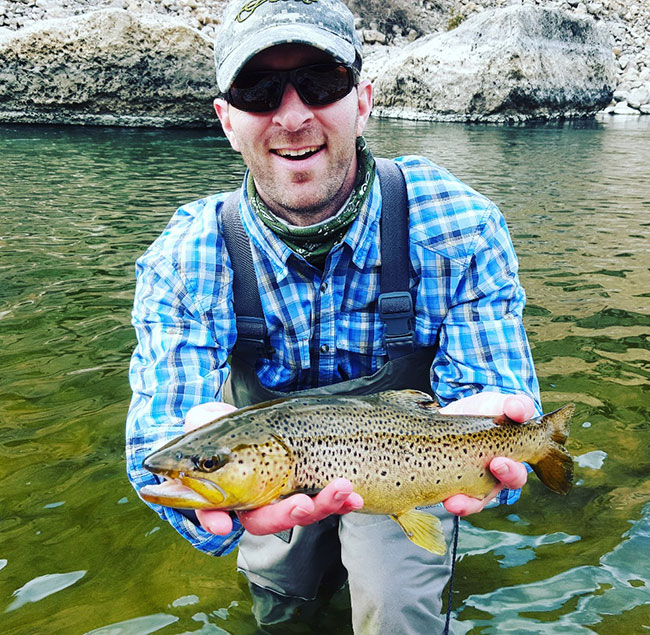 This nice brown came from an 8-foot-deep pool on the Wind River Below Boysen Reservoir.

3 thoughts on “Photos: Nymphing on the Wind”