On Wednesday, some of our endorsed guides and lodges offered on-the-ground assessments of the effects of wildfires on Montana’s fly fishing. As you’ve surely seen on the news, the Pacific Northwest is also enduring a brutal fire season. Here are some reports from operations in Idaho, Washington, Oregon, and California.

In many places, the biggest problem is air quality. Click here to check the conditions throughout the region. Here are the reports from the field.

Karen Syron, Flying B Ranch (Kamiah, ID):
Here in North Central Idaho, it’s very smoky, the worst it has been in two years. We have several fires up the Selway River and a new one that started last weekend on Coolwater Ridge–near a fire lookout above the confluence of the Lochsa and Selway Rivers–that is creating heavy smoke cover here. Luckily, up to this point, we have had no fires in our region that have threatened homes and none threatening the Flying B Ranch, so we are thankful for that. We’re really pulling for things to improve for our friends in Western Montana, as they are really in a state of emergency.

Justin Hays, The Lodge at Palisades Creek (Irwin, ID):
Here in East Idaho, we have very smoky conditions, which create amazing sunsets and rises. AMAZING! We were in the path of totality for the eclipse, and that blew our minds.

Conditions here are very crispy. Currently, there are no fires nearby, but big ones in central Idaho and near Idaho/Montana boarder. We are keeping our fingers crossed we don’t ignite, as the fuel is there from a wet spring. Evenings have been harshest for smoke, as high pressure and little wind allows the smoke to settle. Everyone here can feel it in their lungs. 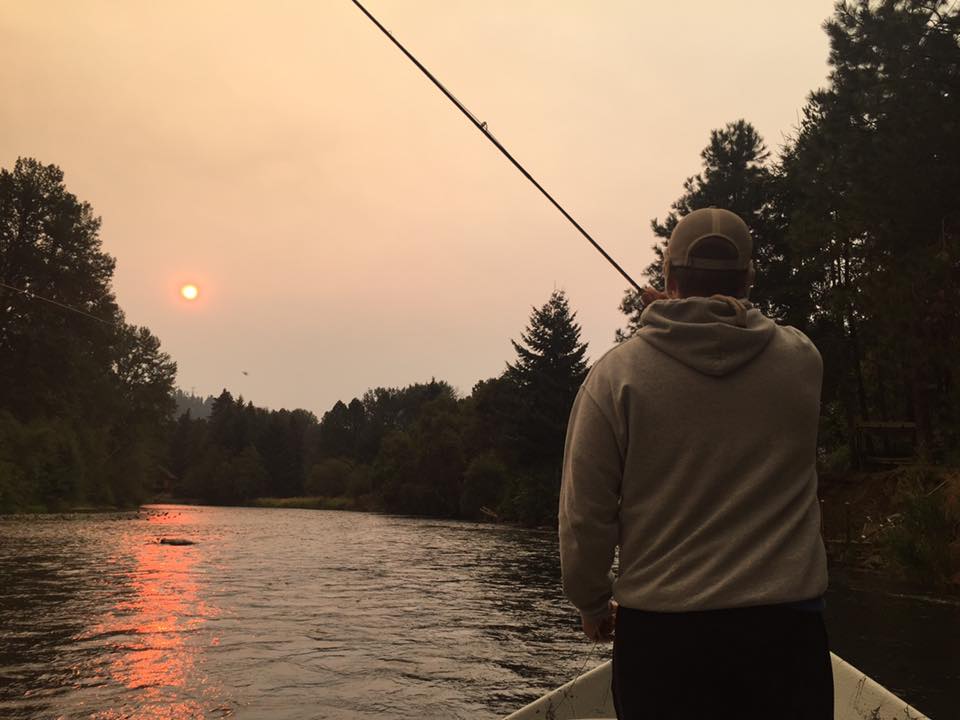 There is quite a bit of smoke hanging around Ellensburg, Washington, but the fishing has been rewarding
for those willing to brave the conditions.
Photo via Ellensburg Angler Facebook Page

Mike Canady, Ellensburg Angler (Ellensburg, WA):
We do have some major fires close to us, but still plenty far enough away. The smoke is pretty bad, and we need some rain really badly. We are calling guests and letting them know that if they have asthma or any respiratory issues, we should think about rescheduling. The fishing is actually really, really good right now: this smoke is helping the fishing, I think. Thanks for checking on us, and hopefully all the firefighters stay safe and we get some big rains to help fight these fires.

Mac Huff, Eagle Cap Fishing Guides (Joseph, OR):
So far, we’ve been lucky here in Northeast Oregon. No fires from lightning a couple weeks ago, but another round is forecast later this week. Although no fires here, we are getting plenty of fallout from far-flung fires–smoke perhaps from fires in B.C. and certainly smoke coming north periodically from fires in southern Oregon near Roseburg. Some days the smoke clears out, but sometimes the Wallowa Mountains, about five miles away, are completely obscured. Hoping for more rain this weekend, rather than the “slight chance” that is in the forecast.

Brian Slusser, Four Seasons Fly Fishing (Truckee, CA):
Somehow the smoke has missed us this summer. But I am on a trip in Washington, and Wenatchee area is pretty smoked-out. I managed to get out and hassle some fish. Most people are laying low, so there’s not much pressure.

Back in Truckee, there’s no smoke, just thunderstorms and rainy, and as cooling trend is coming, as well. The fishing is good on the Truckee and Little Truckee rivers. Plus, the little streams with water are good, as well. Most of the bigger bugs are gone for the season, but fish are looking up for caddisflies and attractor drys. Hanging a nymph off a Stimi is good right now, as are streamers on the overcast days.

Eastern Idaho has been lucky and currently has no wildfires. Idaho, Washington, and Oregon are all dealing with air quality, however. A majority of the state of Idaho is in the “unhealthy for sensitive groups” to “unhealthy” range, but Northern Idaho has to deal with “very unhealthy” air quality. A lot of students have been forced to spend the day indoors due to the air quality.