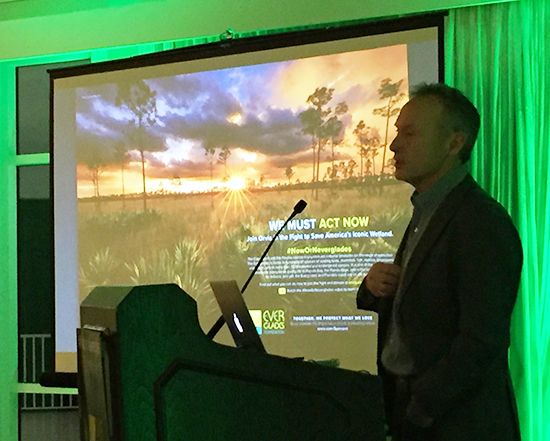 The following comments were made by Orvis CEO Perk Perkins at the Everglades Coalition Conference on Jan. 5, 2017.

I remember from my earliest days camping with my father, he taught me and my brother to always leave a campsite better than we found it. That has become a metaphor for my life and our company.

I first became aware of the plight of the Everglades 32 years ago, the same year you were holding your first Everglades Coalition Conference. I was privileged to be tarpon fishing with Rick Ruoff in the back country north of Islamorada. I noted a remarkable abundance of jellyfish pulsing on the bottom, and he explained to me that they were the Cassiopea jellyfish, fond of hyper-saline water. “They weren’t here like this five years ago …” and that led him to explain to me how the freshwater from Lake Okeechobee formerly flowed through the “Sea of Grass” into the Everglades and how those freshwater pulses made the Everglades the global ecological treasure that they were. He went on to explain how nature’s plumbing of South Florida had been re-routed by private and public interests to flow east out the St Lucie River and West out the Caloosahatchee River, depriving this part of the Keys of the freshwater that made it such a rich fishery. He alarmed me with the scale of the problem, and the huge economic interests at stake.

From that day on, I have never thought about any conservation challenge, large or small, without thinking of the plight of the Everglades. And in the three decades since then, it has been an emotional roller coaster, with heights of hope and depths of despair as solutions have risen and fallen. Even from the first (of many) of Rick’s lectures on the subject, I realized this ecological tragedy would take my lifetime to resolve, if ever! This was one campsite that I really wanted to leave better than I found it.

So why now? Why, in 2017, Orvis is devoting its full conservation effort to the Now Or Neverglades campaign? I’ll tell you why – the stars have aligned, and the opportunity has never been better to enact a long-term permanent solution to the wreckage of the Everglades. Climatic, scientific, economic, and political forces are lined up like windows through an abandoned building – and a solution is clearly visible–IN THE NEXT 5 MONTHS. After 32 years, we’re talking 5 months!

This is a long shot, but raise your hand if you attended the first Everglades Conference 32 years ago. [Out of the 200 attendees in the room, 4 hands went up.] Thank you! Thank you for your persistence, for the glue you have supplied to keep this effort building year upon year, amassing the passions, learnings, lessons. And thanks to all of you, whether this is your first conference, your 5th, your 10th – whatever. I have learned in my four decades of conservation that it is a game or persistence. But when the right moment comes, it so often requires urgency and total devotion to get across the finish line. It’s a difficult duality. If you need convincing on this, read “The Crucible of Conservation,” the 21-year-long saga of the creation of Grand Teton National Park where, twice, defeat was snatched from the jaws of victory; how Rockefeller’s persistence and staying power combined with exasperated urgency to get the job done when the right moment came a third time.

The checks that Orvis can deliver to the Now Or Neverglades Campaign are a drop in the bucket. And while I know they are encouraging, needed, and appreciated, what we and others like ourselves can bring is the energy it requires to change gears of essential persistence to Urgency and Total Devotion. But let me give credit where it is due, and that is to Orvis’s customers. They have the wealth, power and influence to accomplish far beyond what we as a company could ever do. Our goal is to inspire and focus them with conservation opportunities like this one – Now Or Neverglades – get it done!