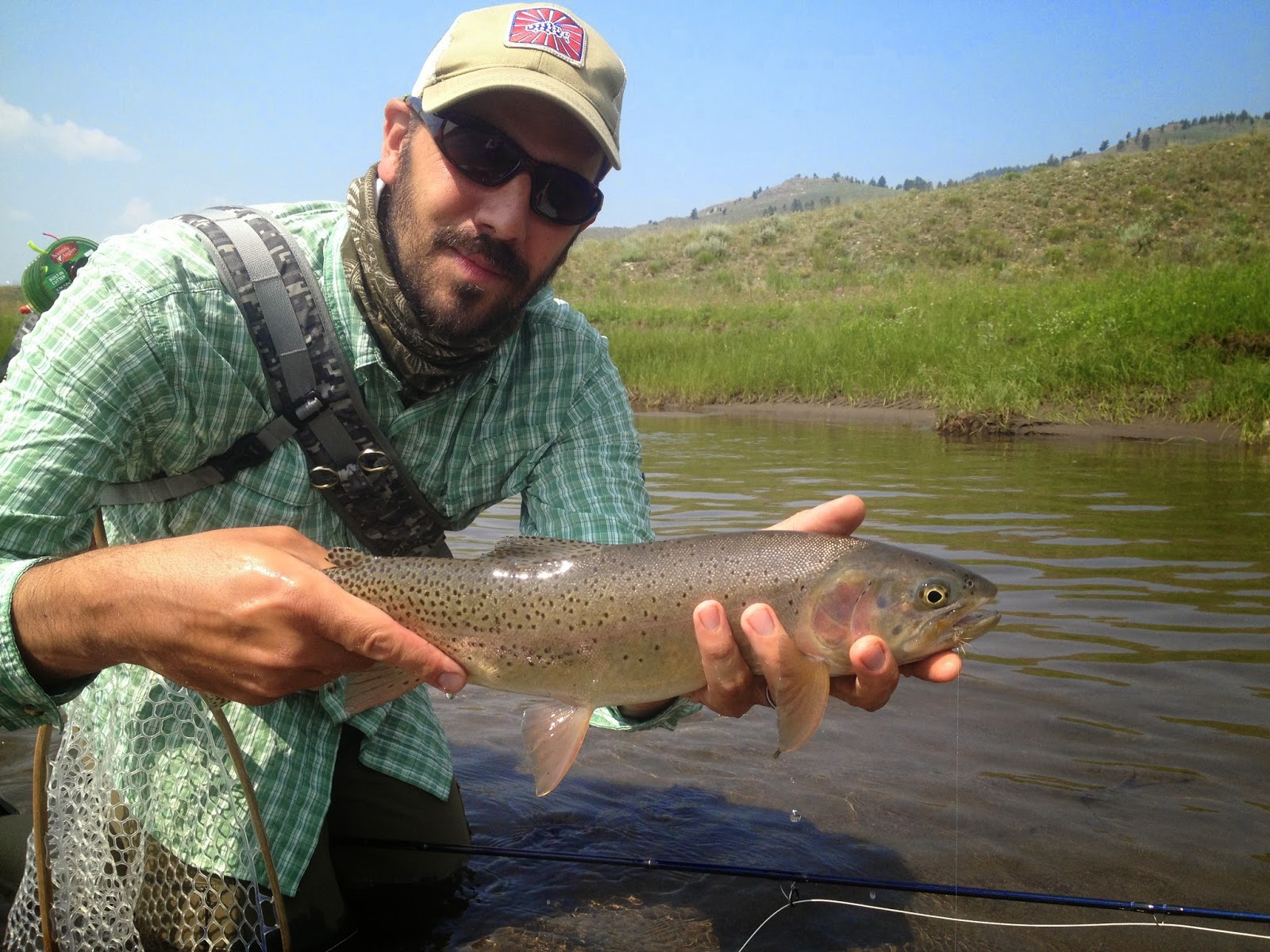 This 19-inch cutthroat too the author’s Sparkle Dun on Slough Creek.
All photos by Oliver Streuli

[Editor’s note: Blog reader Oliver Streuli spent a week last month at Hubbard’s Yellowstone Lodge, near Emigrant, Montana, as a student in the Hubbard’s Guide Academy, run by my friend, Eben Schaefer. Oliver posted this account on his blog, The International Hobbyist, and graciously allowed me to republish it here.] 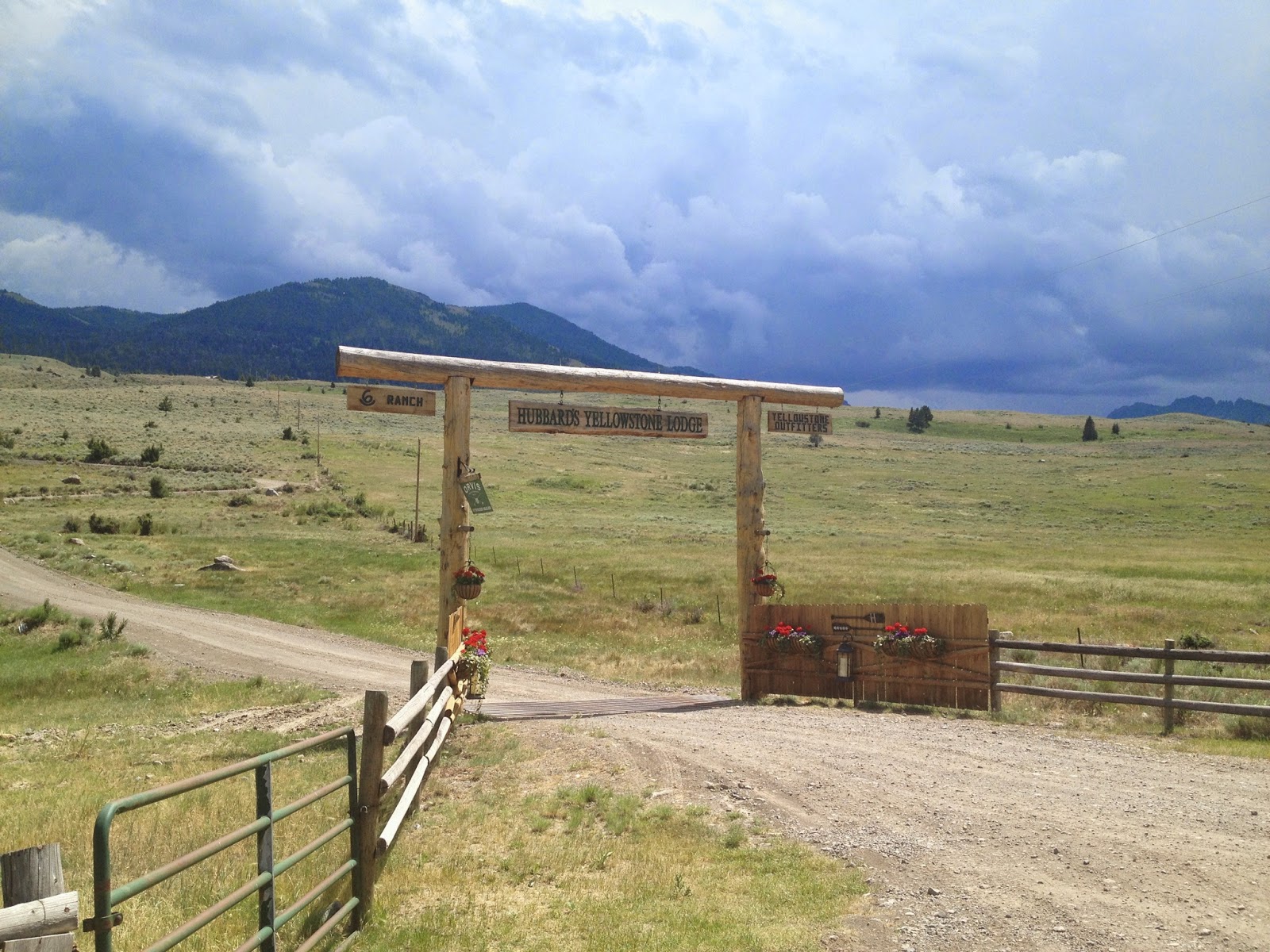 The entrance to Hubbard’s Yellowstone Lodge, on a mountainside above the Yellowstone River.

I have no intentions of guiding professionally and all I really hoped to get out of this were some enjoyable experiences and improved fishing skills, and my expectations were exceeded. Hubbard’s Yellowstone Lodge is situated on the shores of a scenic lake full of of fat rainbows, cutthroat, and browns, and bald eagles and mule deer are common around the lake. Despite being pretty exhausted at the end of each day, I couldn’t resist rowing one of the provided drift boats out to hook into some of these hard-fighting and big fish almost every evening after dinner. 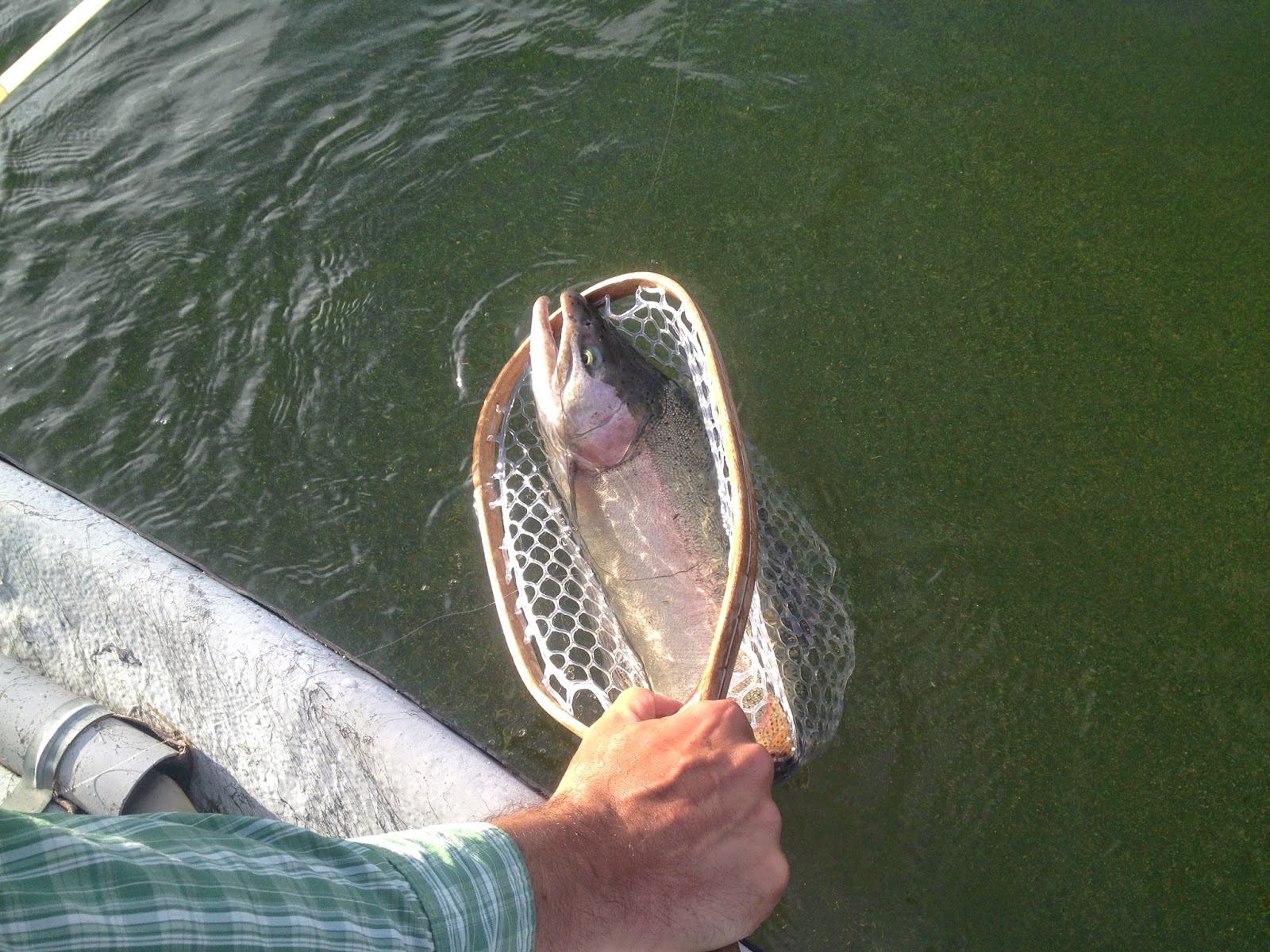 One of the fat rainbows from Merrell Lake, right at the lodge.

Day 1 of the guide school was some classroom work—knots, connections, casting, entomology, tying. . .that sort of stuff. The classroom is outfitted with an enormous amount of fly-tying materials and equipment, videos on rowing drift boats, books on bugs and hatches, and lots of stuffed heads and bearskins, for a truly rustic feel. In the afternoon, our teacher, Eben Schaefer, took us down to Tom Miner creek for a little small-stream work. We took turns guiding other students and hooked small, feisty cutthroats and browns in pocket water. We prepared for the next day by ordering lunch to go for all the participants, and enjoyed grilled T-bone steaks and cold bottles of Trout Slayer while gazing out at the Yellowstone snaking through the beautiful Paradise Valley. Hubbard’s is one of those places where you have to consciously remind yourself to appreciate it, that you’re beginning an experience that you’ll never forget. 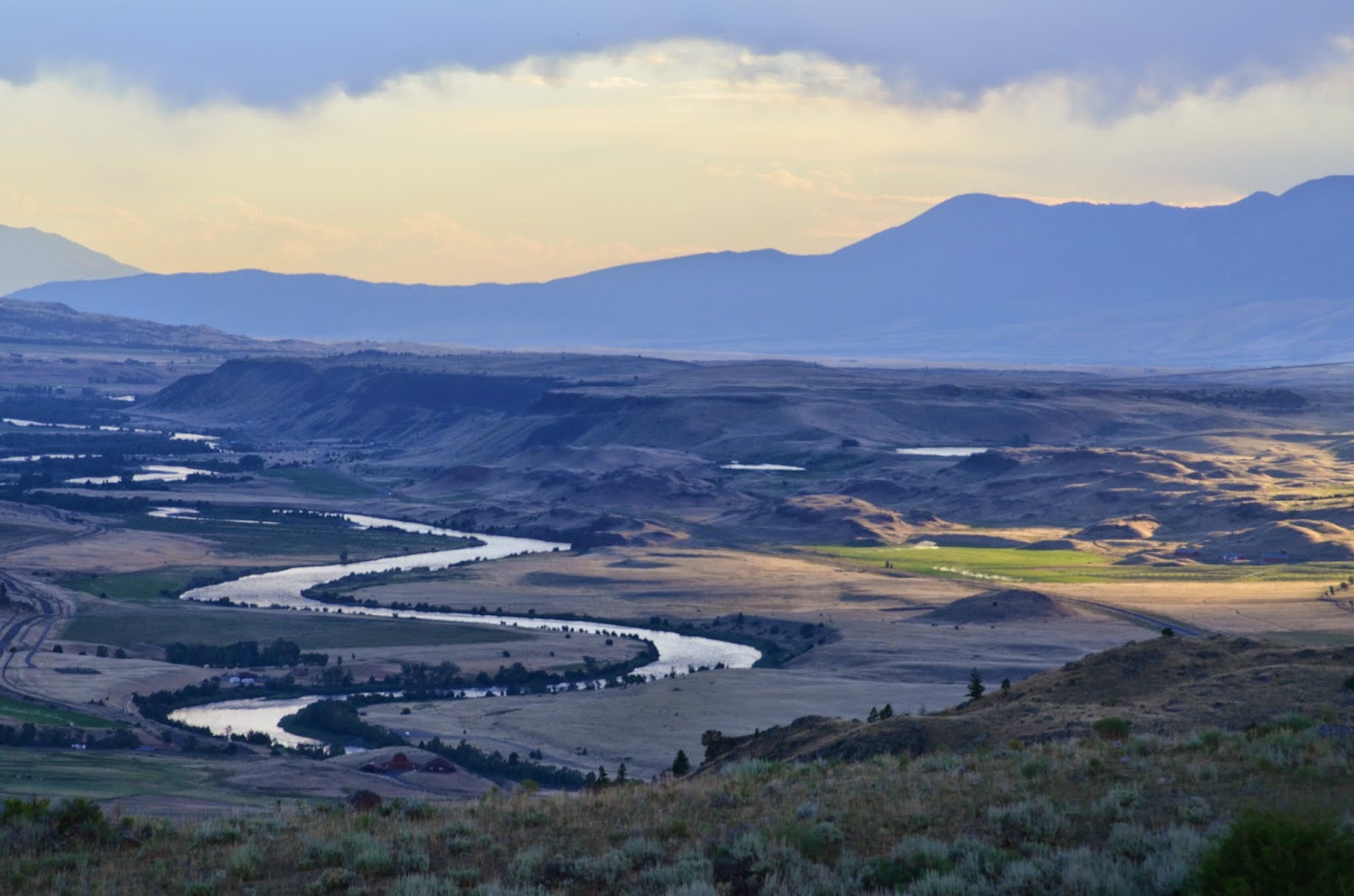 The view from the lodge, looking down Paradise Valley. 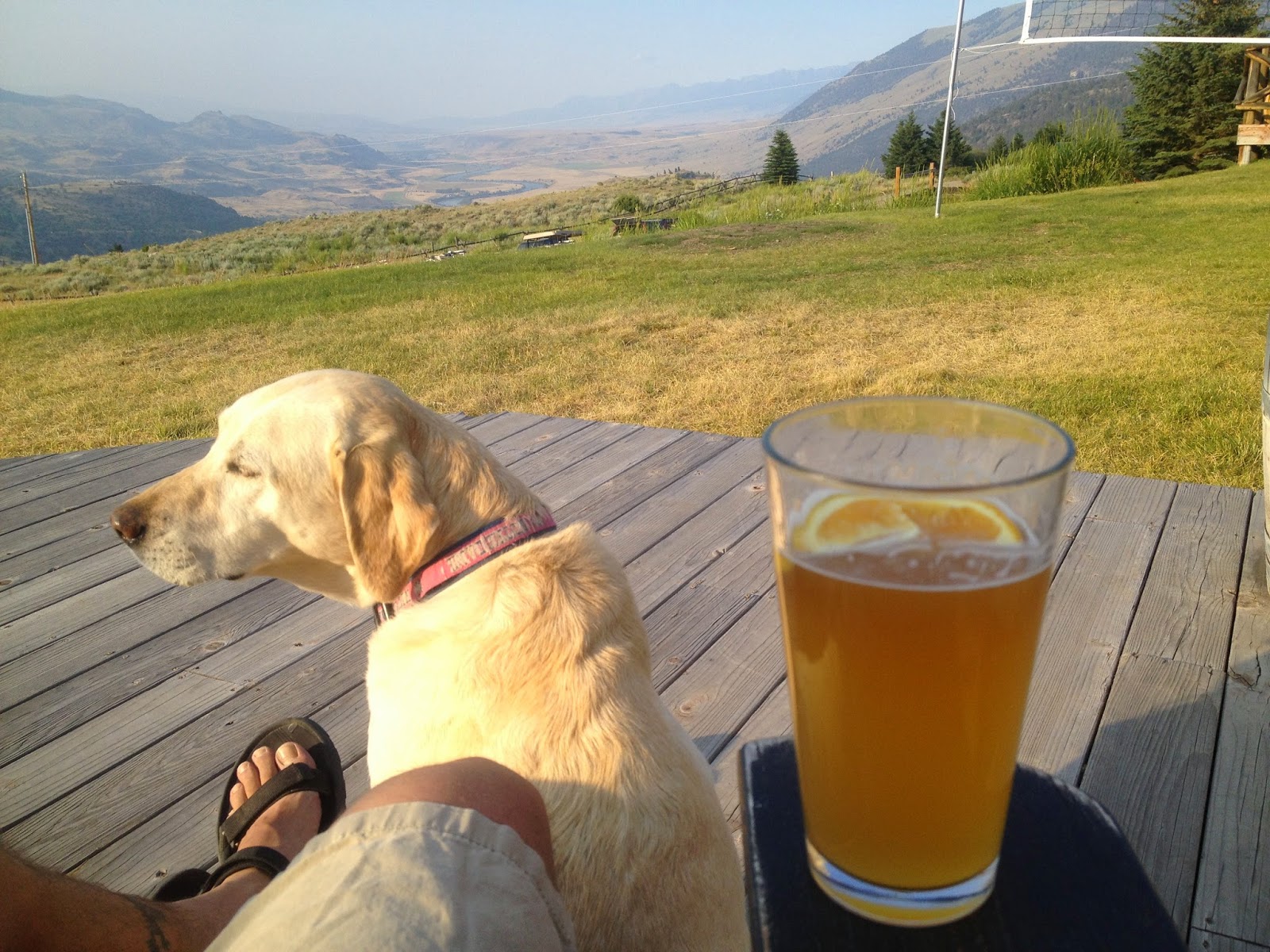 Living the good life on the deck outside the main lodge building.

On Day 2 we got up, ate a gigantic breakfast, prepared a cooler full of drinks and lunch, and headed into Yellowstone National Park, arriving at Slough Creek after a very scenic hour’s drive. To say I was excited for my first day of fishing inside Yellowstone would be a massive understatement. We parked the car, walked a few hundred feet, and immediately saw rising fish of considerable size. After a quick primer on the river, we again took turns guiding each other. I caught a handful of decent cutthroat and cuttbows, and when it was my turn to guide, I tied on a self-tied Sparkle Dun for my “client,” who ended up hooking a good fish. The Sparkle Dun would be a go-to fly for the remainder of the trip.

Day 3 heralded a return to the Park. We spent the morning fishing the Gardner River amidst the occasional rain shower. The fishing was decent, and again, we switched off between guiding and being guided. In the afternoon, we visited Lava Creek, which would end up being one of the more memorable parts of my trip, despite the small size of the fish. I had never really experienced brookie fishing like this, and not only were the fish and the surroundings breathtaking, but catching one fish after another on my Orvis Superfine Glass 3-weight was endlessly entertaining. I did manage to hook and land a brookie of around 14 inches, a beast for a small stream like this, but he slipped out of my hands before I could take a photo. (I went back a week later, and got him again, and managed to get the photo below.) Before heading back to the lodge, we stopped at a deep hole on the Gardner to try some deep nymphing with no success. The drive back to the lodge, as it did on most days for the rest of the trip, featured the occasional traffic jam caused by elk or bison watchers. The next day, we’d try our hand at floating the Yellowstone, so we watched some videos on how to handle the boats. (Watching my 18-year-old fellow guide-school students trying to figure out how a VHS machine works was an added and amusing bonus.) I watched the videos attentively, but couldn’t shake the feeling that I was somehow unprepared. 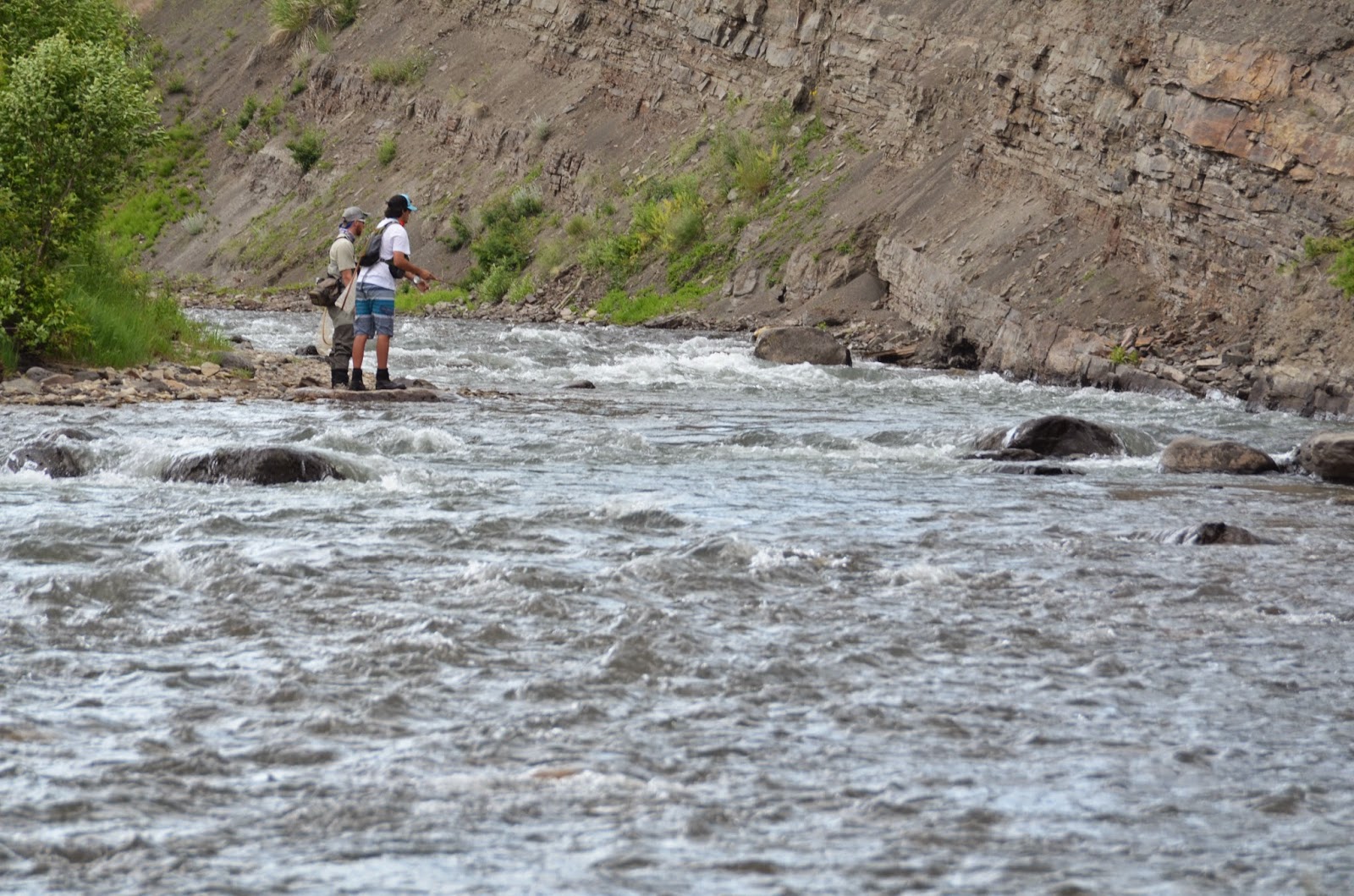 Learning to read the water on the Gardner. 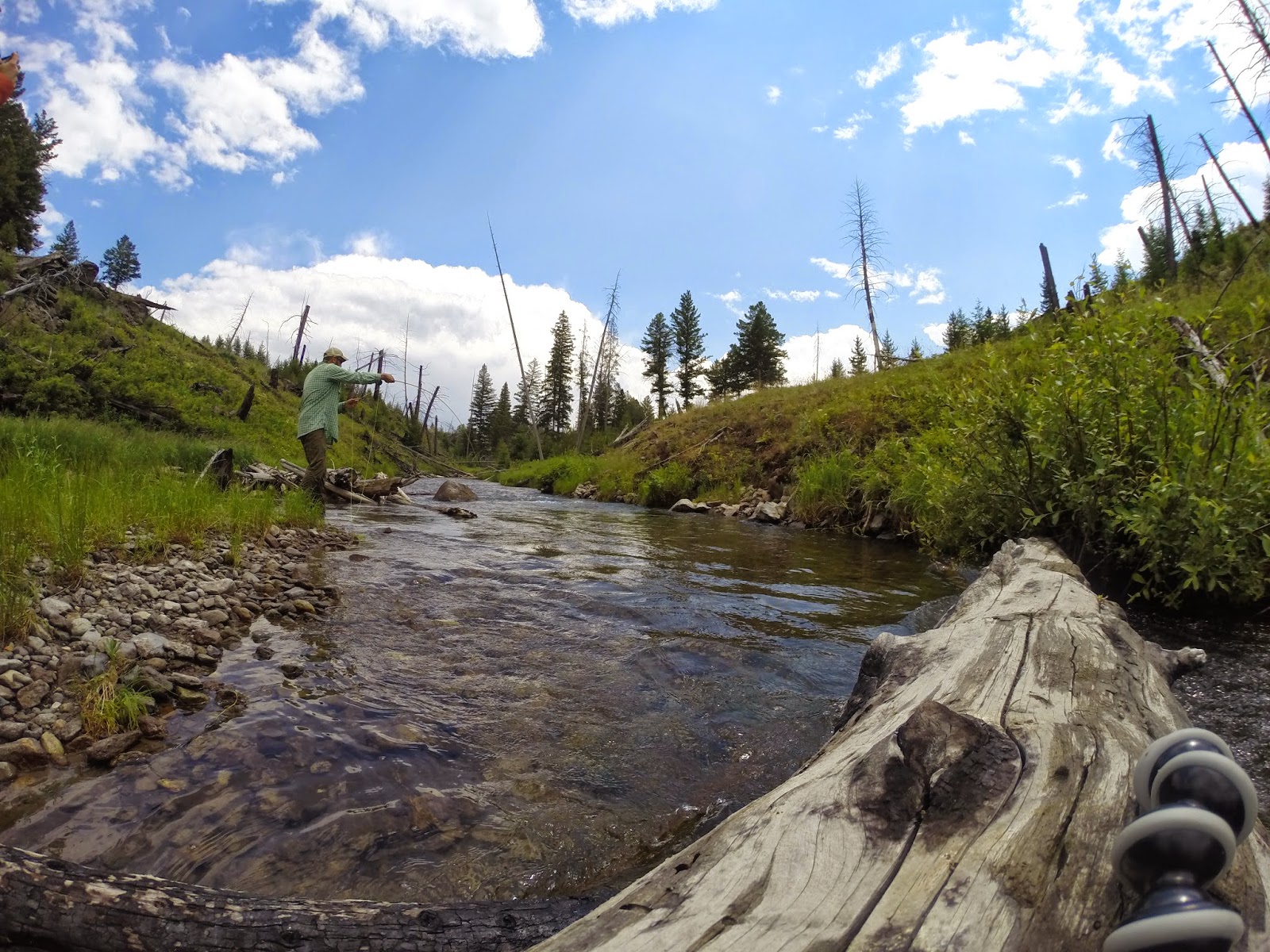 Lava Creek is one of the most perfect, picturesque little streams I’ve ever seen. 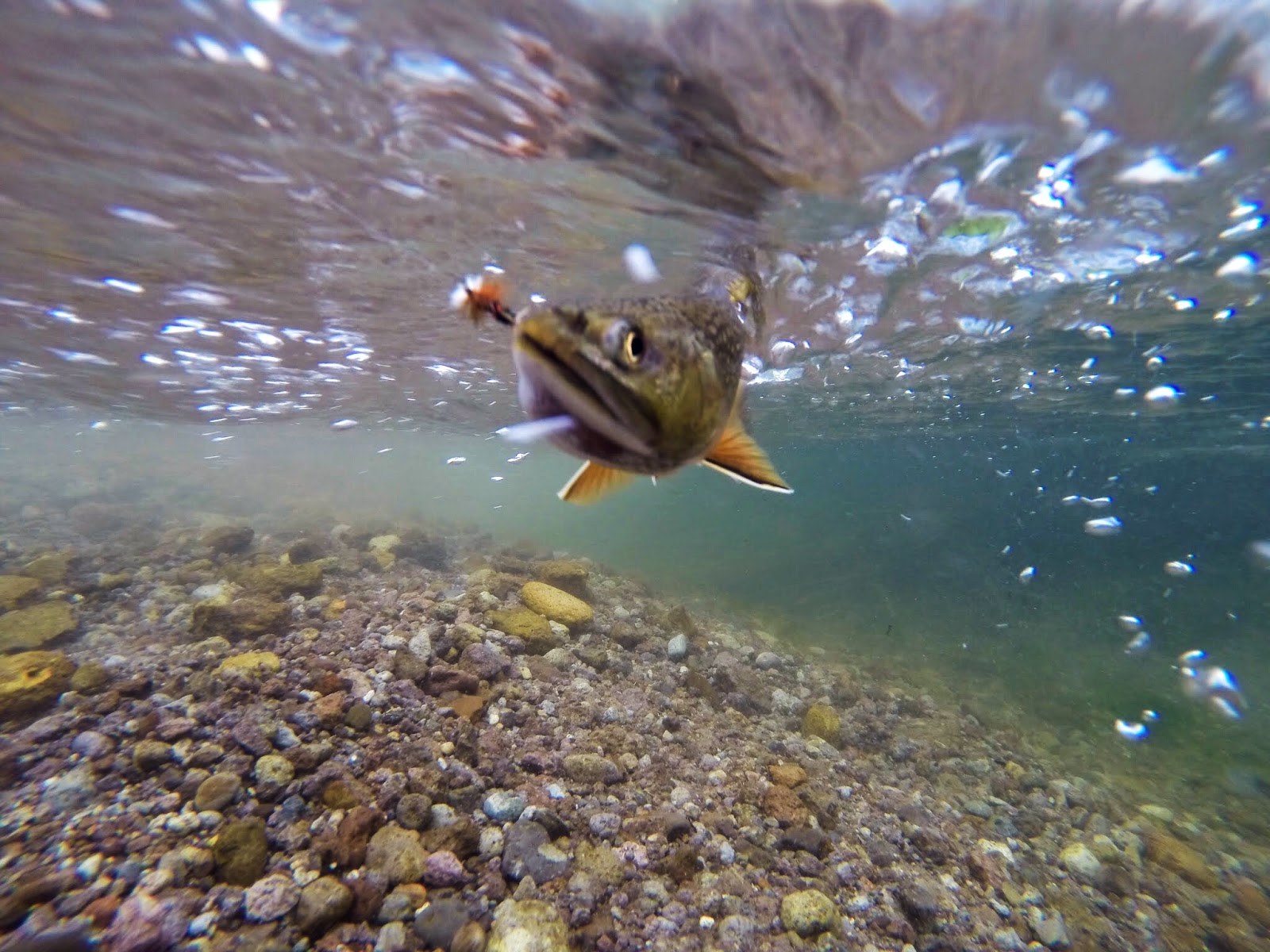 This brookie ate a Royal Wulff. 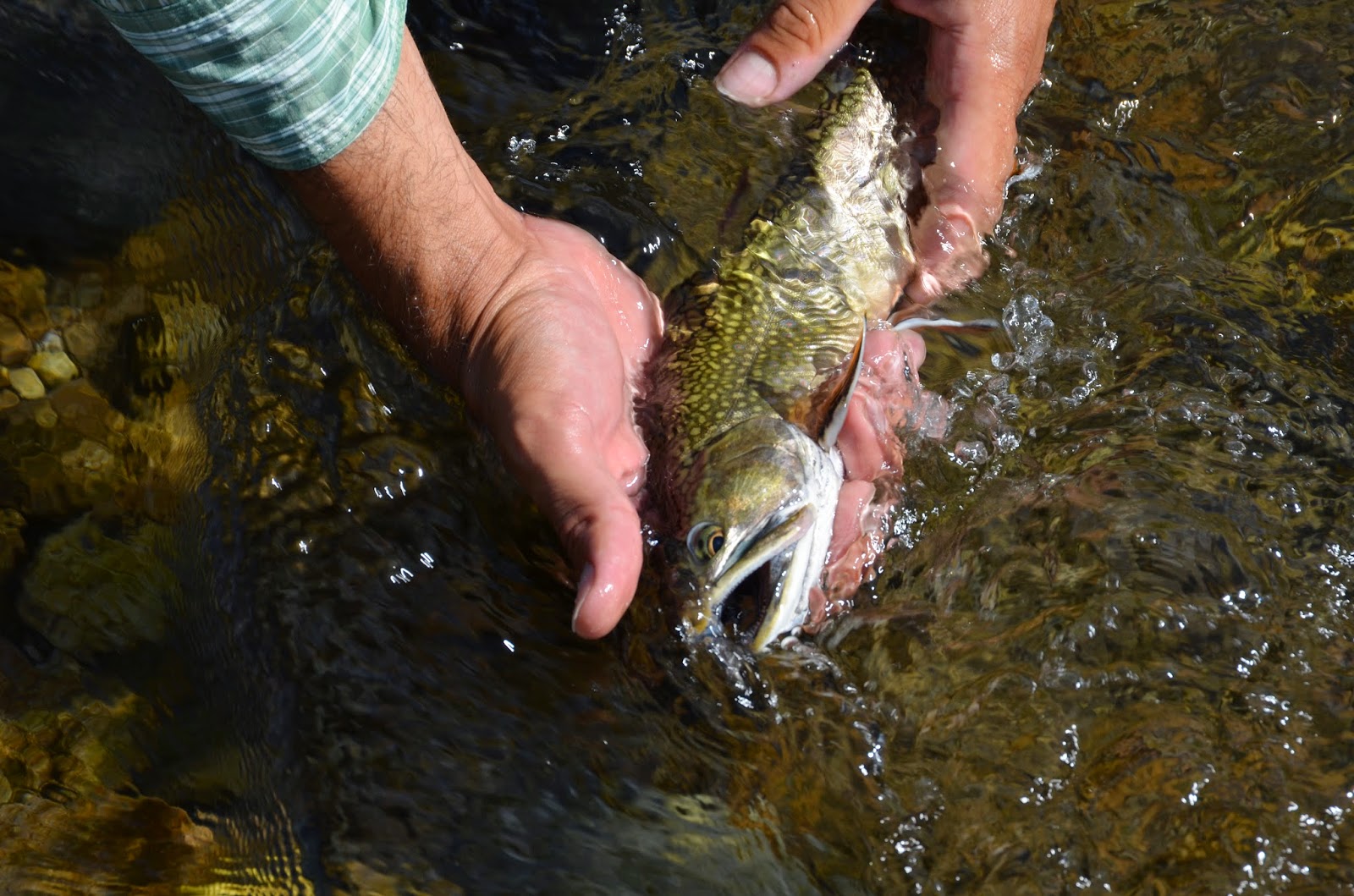 The one that got away, when I caught him the next time.

On Day 4 I’d confirm, without a doubt, that I was somehow unprepared for the rowing a drift boat down the Yellowstone. We put in at Carbella and planned to drift to mile marker 26. After some mistakes, some firm corrections from Eben, and ironing out of bad habits, I got the hang of it. I found it a bit stressful at first, but enjoyable after a few hours. I rowed roughly half the day, and got to fish from the boat for the other half, after the usual streamside lunch. The fishing was slow: we’d land the occasional cutthroat, the less occasional brown, and the ever present whitefish. This was the first time I’d fished from a drift boat, and it was very different from what I’m used to. Constant repetitive casts as close to bank as possible, rarely to rising fish, and generally one shot per likely looking spot. At the end of the day, my arm was exhausted, and I was half dreading, half looking forward to the next day of rowing. 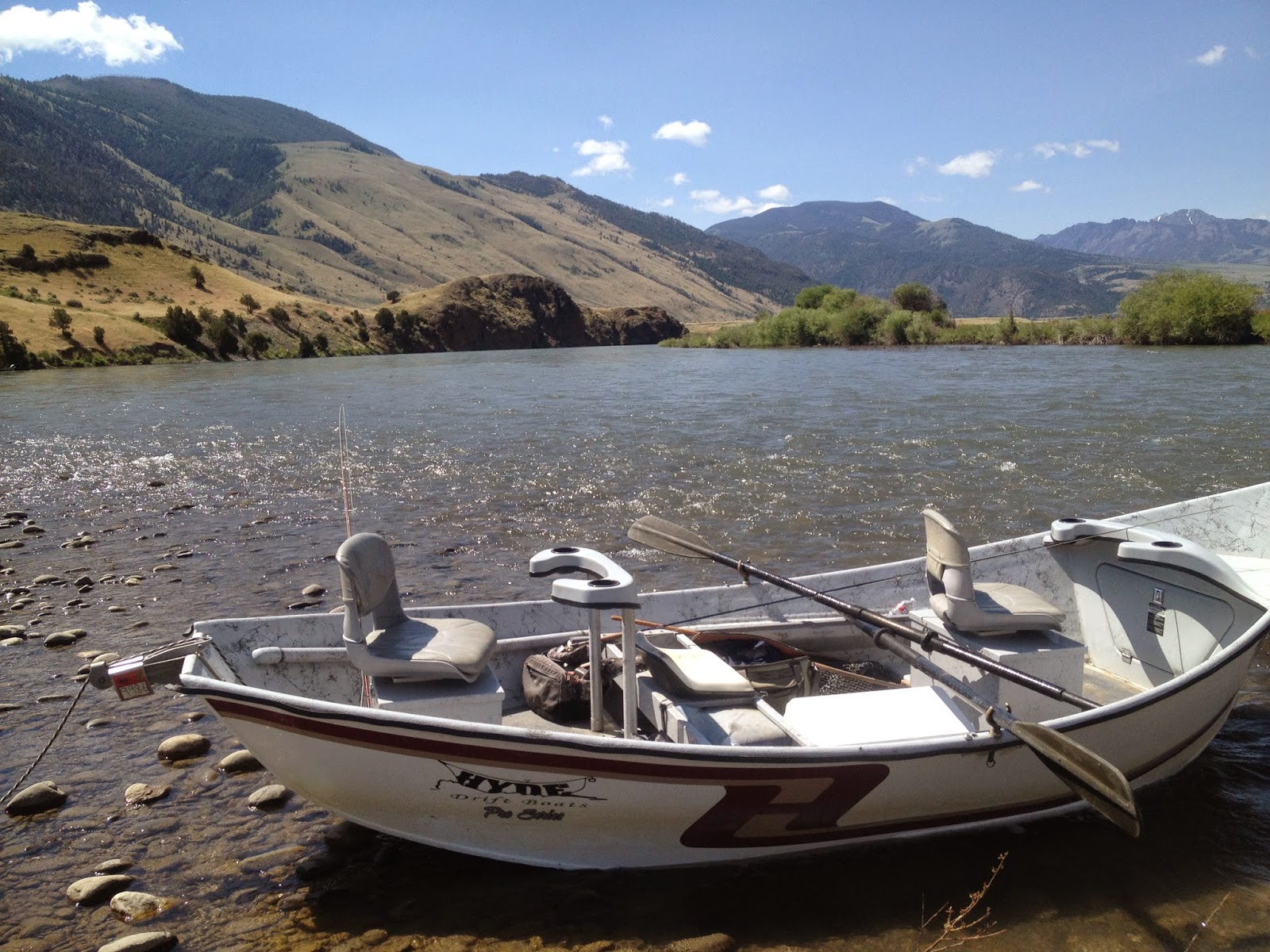 A typical spot for lunch on the Yellowstone. 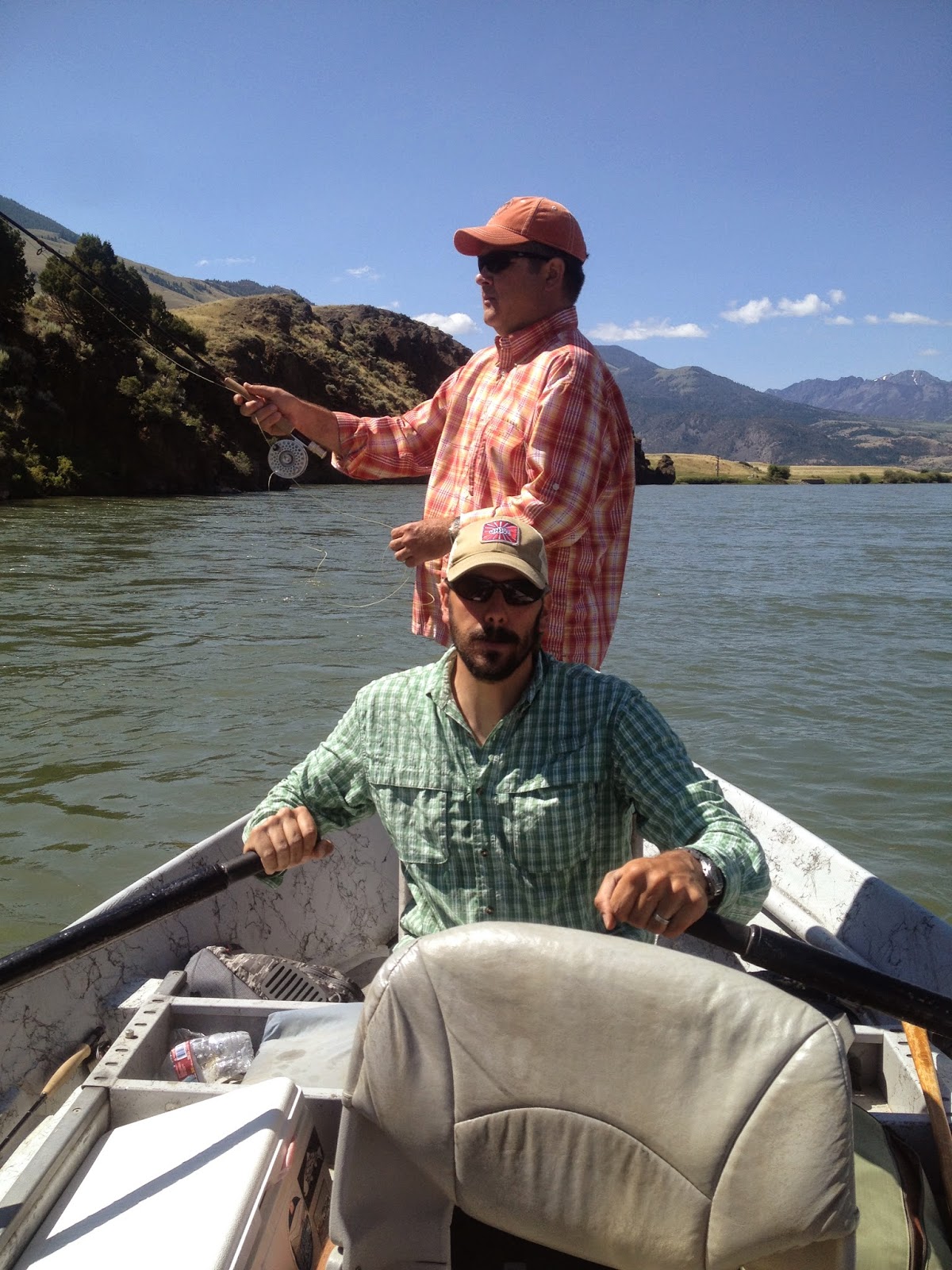 The author at the oars on his first day rowing a drift boat.

Day 5 was back to Slough Creek. It wasn’t wide open by any means, but the fish were cooperative enough to make the absolutely vicious insect population tolerable. I’d learned from earlier mistakes and wore long pants and a long sleeved shirt to keep the flies at bay. They were still remarkably determined and would crawl in ears, down shirts, and under sunglasses, but mercifully, they were particularly easy to kill, likely because they were bogged down by a tiny stomach full of my flesh. At the end of the day, I was covered in mashed fly bits, but each one represented a tiny bit of satisfaction. Fortunately, the bugs only seemed particularly bad around Slough Creek. Elsewhere they’d vary from mildly annoying to nonexistent.

Most of the morning was spent casting a Sparkle Dun to a single big rising fish moving sporadically around an eddy. I was determined, and after what was at least two hours, and a missed strike, he took, and I landed a pretty 19 inch cutthroat. I’d land a few smaller, less well-deserved fish as the day went on, but this one was the most memorable. 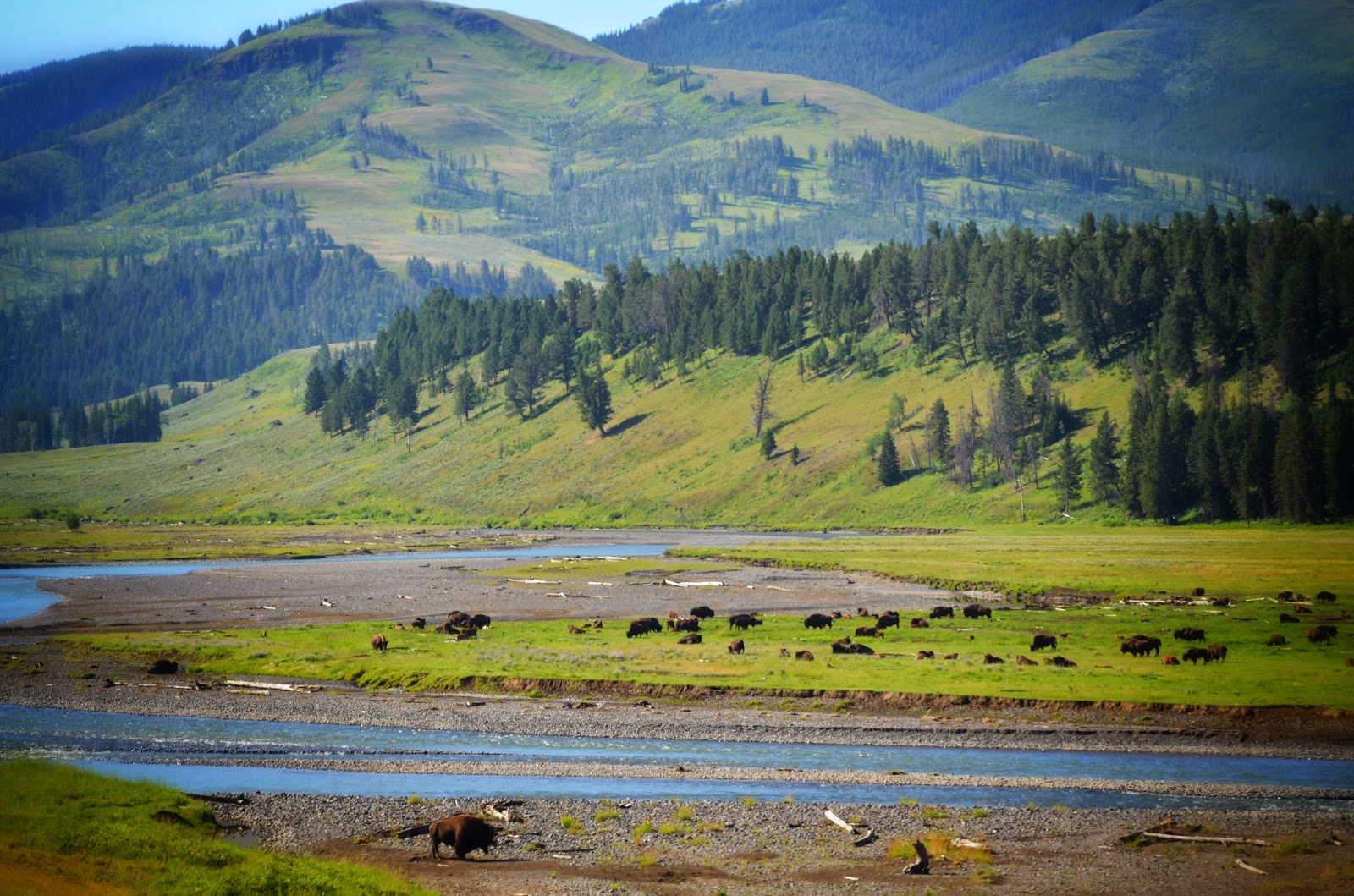 The views in Yellowstone National Park are breathtaking.

On the last day, we floated the Yellowstone again, this time from McConnell to Yankee Jim. I rowed the whole morning under the supervision of Matt, one of the guides at Hubbard’s, and the same guy who’d be guiding us for the next week at the Lodge. I felt more comfortable rowing the second day, and the fishing was substantially better than the first day, as well. Watching Eben and Matt fish while I rowed was a good learning experience, for watching a good guide fish is a humbling experience. I can’t even begin to estimate how many hook sets I blew on slow-moving cutthroats during my trip to Montana, hook sets these guys nailed every time. Another delicious streamside lunch, another pleasant afternoon of fishing, and another sore arm at the end of the day, and my experience at guide school was already behind me. The next morning, after the other students and I exchanged goodbyes, I went for a hot, midday run in the park. I’d be picking up a friend from the Bozeman airport that afternoon, and readying myself for another week at Hubbard’s, this time in a slightly different capacity. 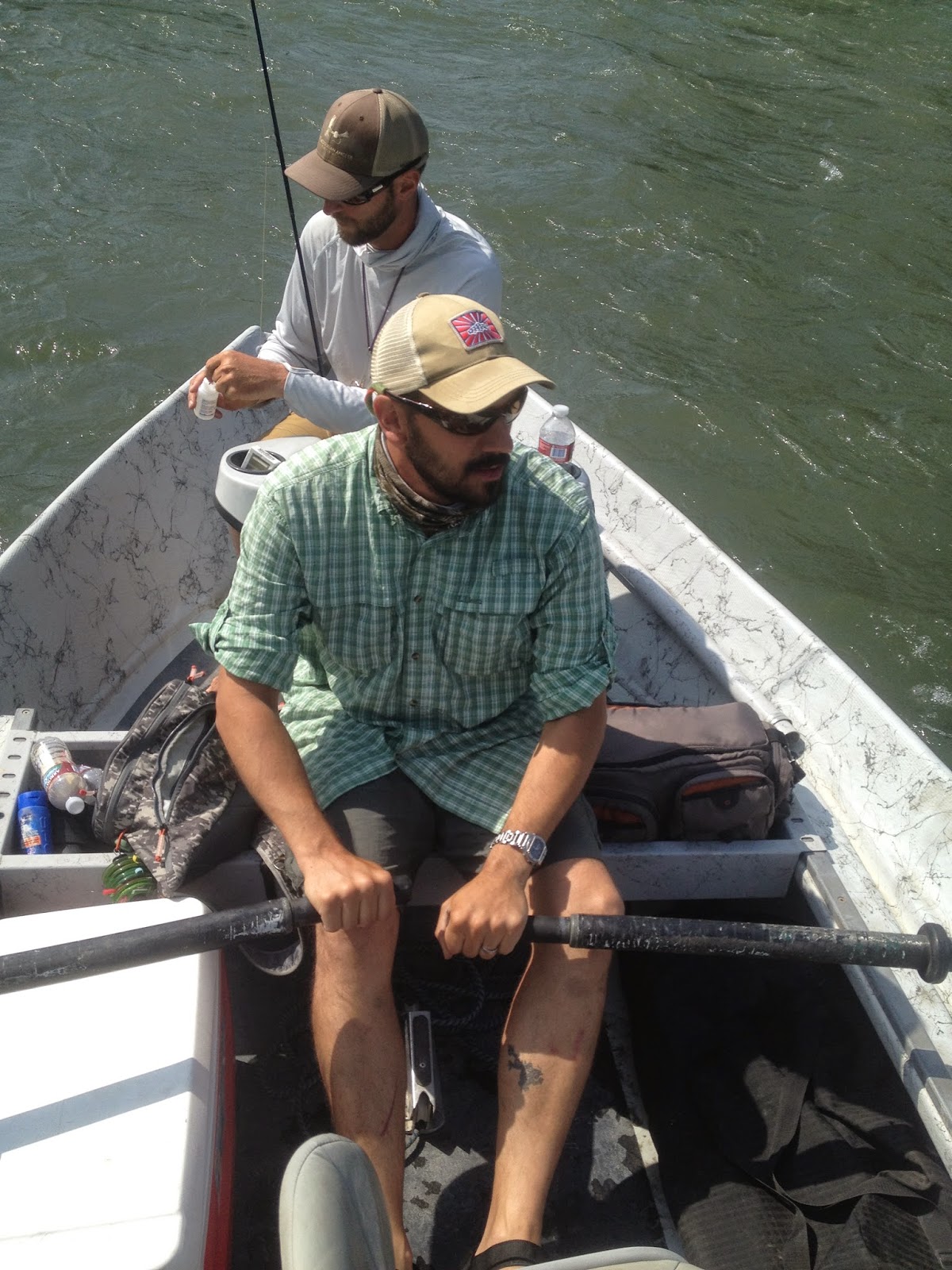 Still basically incompetent, but slightly more relaxed on the second day of rowing the Yellowstone.

So, in short, guide school was great. It made me a better fisherman, and I got to fish some of the best trout rivers on the planet in the process. However, what a week of guide school can’t give you is the years of experience that all these hard-working guides have under their belts. It can start you on your journey as a guide, or it can show an experienced and good fisherman with a many years of experience how to put it all together, but there is no shortcut to putting in those hundreds, even thousands of hours on the river you need to put in before you can truly call yourself a guide. (This point would be made over and over again the next week, with Matt as our guide.)

My favorite part was fishing inside the park. Having a bison sneak up behind you while you’re fishing and seeing a dazzling array of wildlife on your way to a new pristine fishing destination every day is an unforgettable experience. I have to be honest and say that fishing from a drift boat is a novelty that, while fun, isn’t something I’d choose regularly over wade fishing. I miss the stalk, the serenity, the peaceful feeling of gently making your way through and along a river.

The lodge and staff were amazing, the location is breathtaking, the food plentiful and delicious, and the price, for guide school, is a bargain. Even if you have no intention of becoming a guide, the chance to hone your skills, fish some of the best rivers the American west has to offer, and stay at a first-class lodge is well worth the price of admission.

Oliver Streuli is a film editor and fly fisherman who lives in Switzerland.

3 thoughts on “Photo Essay: A Week at a Montana Guide School”