[Editor’s note: Last April, we posted about photographer Pat Clayton’s goal to spend the summer in Alaska to photograph the region threatened by the proposed Pebble Mine. Here is his second set of images and thoughts on the experience.]

Featuring waterways that stretch as far as the eye can see in all directions, Bristol Bay is a living organism where fresh, clean water is the blood that pumps life into all extremities. Groundwater is recharged in perpetuity from the onslaught of Bering Sea storms that pummel this region of Alaska. Vital groundwater, unseen to the naked eye, is 100 times the amount as one sees in the creeks and river. Here, the water creeps through glacially deposited gravel beneath the ground. The ground is a vast sponge that spills its excess annually into the lakes and streams, and salmon travel across the vast ocean to return to these freshwater seeps to spawn and perpetuate their species. 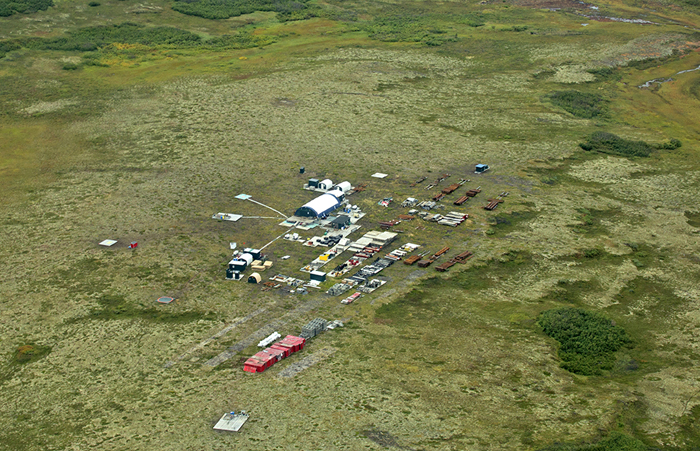 The equipment staging area for all Pebble explorations as seen from the air.

Talarik Creek and the Koktuli River plug directly into the two most important salmon on the planet. Close by is the mighty Nushagak, and Alaska’s largest and most important fresh water lake, Lake Illiamna. The plans for Pebble Mine call for it to be built where these two waterways begin. Anything occurring here ends up there. The risk is too great, and the ecological, financial, and cultural treasure known as Bristol Bay is directly in the crosshairs. As I traveled throughout the region, the interconnectedness of this ecosystem became apparent, and this headwaters location is its heart. This core salmon population center pumps genetic diversity and quantity of salmon to all the outlying areas. No less then 60% of the salmon in the region call the lake and the Nushagak their nursery.

This is the landscape that Clayton calls “ground zero.”

As I flew over the site, the startling consequences of what is proposed sank in; the audacity of putting something so unique at so much risk was dumbfounding. I had planned my trip to end at ground zero. Having spent nearly three months in the communities and landscapes surrounding the mine site, I landed in Illiamna, the eye of the storm. As the first fall storms barreled out of the Bering, whipping Illiamna into a frothy green expanse, I could see the magnitude of what was at stake. The reality of the wilderness was in full view as I watched grizzlies bolt from the very spot I would be sleeping as the plane made its landing on Talarik creek. A place simply known as “the Rock” at the mouth of the creek holds massive rainbow trout that fisherman travel across the globe to have a chance at.

Sockeye’s provide both sport-fishing opportunities and a commercial-fishing industry.

Sockeye salmon, which are the lifeblood for native peoples and the commercial fisherman, were here too. A late-run pod circled aimlessly in the sloughs just upstream. After traveling far and wide, my feet were standing in a creek that is proposed to be completely dewatered, a creek that was bursting with life. This one place had become the center of the universe for the people who lived and relied on clean water and healthy salmon runs. A place and an ecosystem perfected over millennia that mine proponents say can be mitigated by creating habitat elsewhere. The near unanimous opposition amongst the locals, environmentalists, and commercial and sports fisherman is born from the mere idea of Pebble Mine being as outlandishly ridiculous as the idea that man can engineer and/or mitigate this potential loss.

6 thoughts on “Photo Essay: An Argument Against Pebble Mine from the Ground and the Air”