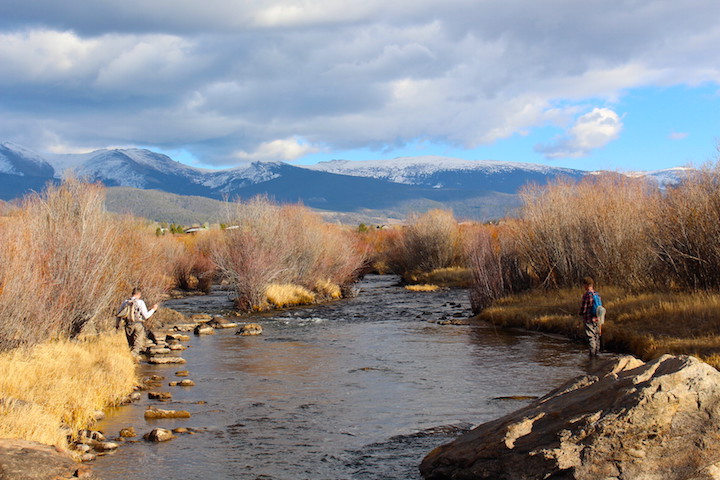 The Farley brothers work their way upstream on a gorgeous November day in Colorado.
Photo by Tyler Coleman

Colorado is one of those places every fly fisher enjoys visiting, and when I first found out that an old friend who lived out there had taken up fly fishing, I began to plan a time to wander the mountains with him in search of hungry fish. Jake Farley lives in the Boulder area and gets out on the stream as often as possible, catching some great-looking fish. I follow his Instagram account and often commented that I’d be visiting him soon. Life tends to have its own plan, though, so the trip was always postponed for one reason or another. Finally, once we’d settled down after moving across country, I began to look for a cheap flight to Denver before winter. Next thing you know, I was boarding a plane with a fly rod on my back, ready for some Rocky Mountain wild trout. 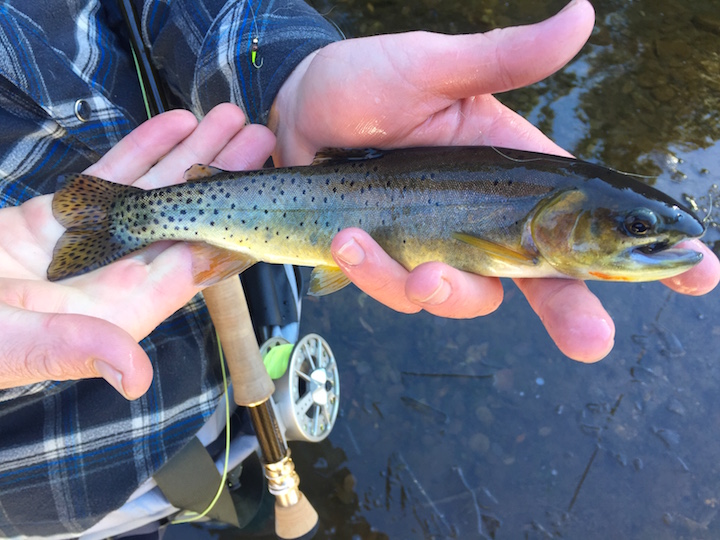 Most people wouldn’t necessarily choose November as the month they would choose to go fish Colorado, but I had to take whatever opportunity I could. The weather report looked pretty good, and with the prime fall fishing pretty much over, we hoped to avoid much fishing pressure. I had been awake all night due to an early departure time, when Jake picked me up in Denver as the sun rose, so we were both eager to get some coffee. We talked about the old days, what we had been up to, and where we should fish. We decided to fish somewhere closer to town the first day and give me some time to adjust to the altitude. (Quick note: A spoonful of blackstrap molasses and staying hydrated seems to be the key to avoiding elevation sickness.) 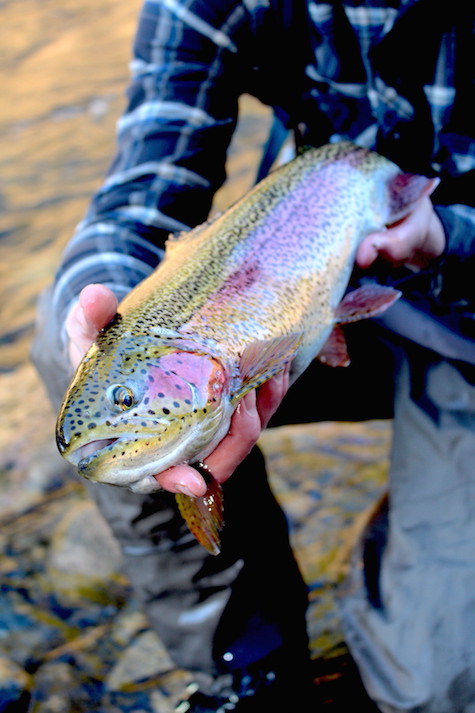 One of the larger fish of the trip was this rainbow from a very small stream.
Photo by Tyler Coleman

The first creek we fished was not too much different from places I had been in other states. The water was low, clear, and there wasn’t much coverage for the fish, so they would run upstream to hide if your presentation was not precise. I decided to go with Jake’s advice to try a nymph, and was soon slopping my fly all over the place like I was just learning to cast. Indicators and tiny flies don’t appeal to me much, but I want to be a well-rounded fisherman and took the opportunity to practice. After spooking a couple fish, losing a few nice ones, and watching Jake land a few, I decided to switch it up a bit. 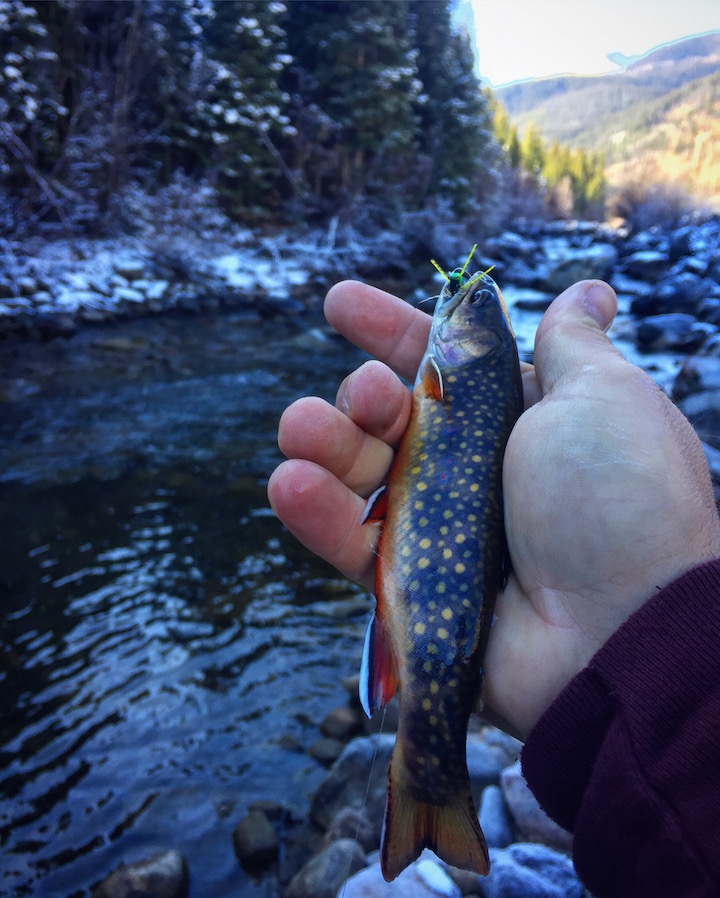 The fall colors of this brook trout were spectacular.
Photo by Tyler Coleman

I finally caught a few fish, but was just not feeling one hundred percent due to lack of sleep and jet lag, so we fished our way back and were preparing to leave. Jake was putting his fly into some really shallow pocket water that I normally would walk right past on the creeks I fish. A few minutes later, I looked up to see his rod bent and his reel spinning as something tried to run upstream. I couldn’t believe any fish could hold in that tiny spot, but when I got the fish in the net, my jaw dropped.  Right then I knew I was in for some learning on this trip. 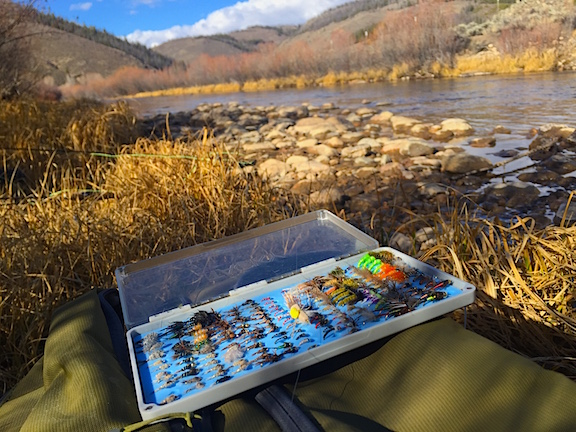 The author’s nymph box got put to good use.
Photo by Tyler Coleman

We headed back to the house to plan the rest of my time in town. Jake and his brother both talked about how this time of year is pretty unpredictable, but so far it looked like we would have decent weather. We decided to go up into the mountains and see if we could find some nice fish. So the next day, we woke up early and began the drive up in elevation like we would daily for the remaining time I had in Colorado. Driving through the snow-filled mountains was awesome, and I enjoyed checking out the local fly shops of the small mountain towns. We had picked up some flies in town, but of course you have to check out the local selections and can never have too many options. 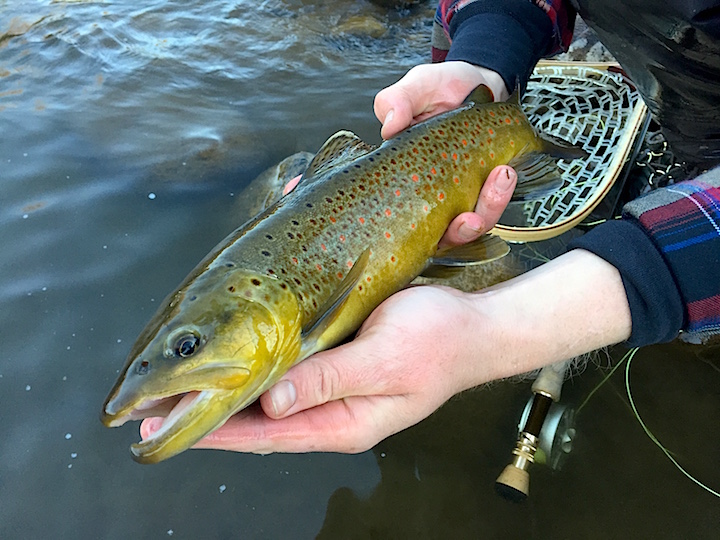 Check out the stunning red spots on this good-size brown.
Photo by Tyler Coleman

It wasn’t long before we were in the water and putting fish in the net. I chose to fish streamers for a majority of the day and had some great eats. This river also had some shallow runs, and a few times I saw just a fat trout with its dorsal fin sticking out like a shark while it ran for cover. It seemed like I learned something new about fish behavior in every spot we stopped to get our lines wet. I battled some nice-size trout through rocky, fast water and got them all the way to my feet just in time for them to shake my fly and swim away. I knew I had to make some adjustments in the way I was fighting these fish to successfully land something. I write from a beginner’s perspective, and I hope that every time I go out, I learn a little more about this art. I’m not sure if I was not setting soon enough or losing tension at some point, but I lost a few really nice fish that day while learning how to fish streamers for trout. 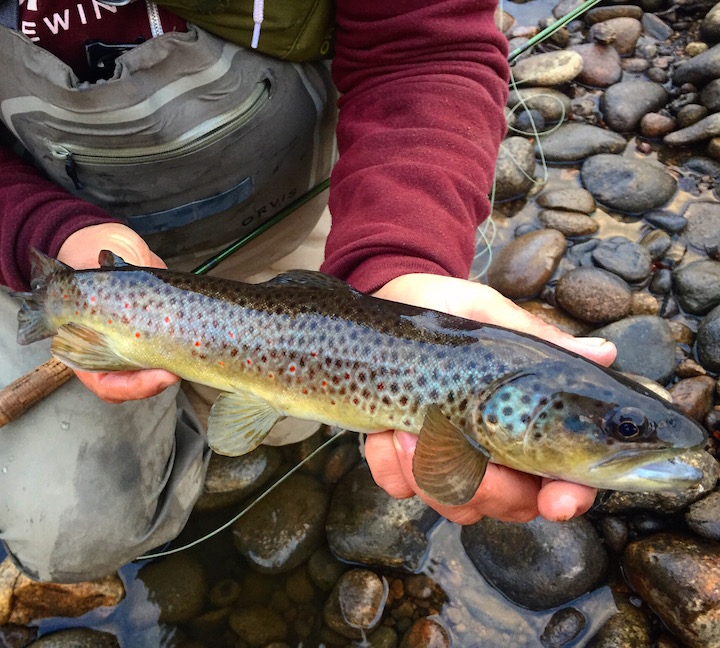 This missile of a brown ate a streamer. Note the cool blue gill plate.
Photo by Tyler Coleman

The next few days, I spent swinging or stripping streamers through everything I could, connecting with some beautiful trout and having a blast watching them leap out of the water. I had fixed my errors and was having a great time. Brown trout are pretty aggressive meat-eaters, and they would take my streamer with power. I can only imagine how awesome these streams can be in the prime fishing season. The three of us took turns fishing our way up the streams, helping net fish and taking pictures for the others. 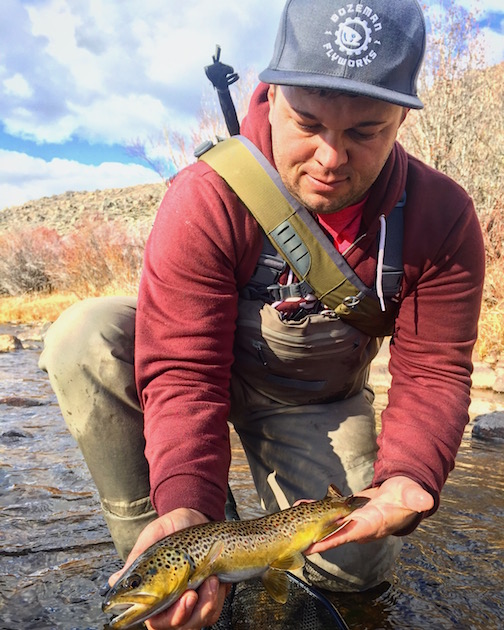 The author with another aggressive fall brown trout.
Photo by Jake Farley

My last day in town, Jake had to work, so I checked out some in-town spots down the street. This little stream was just what I was used to and had a variety of hatches going on, so I grabbed my 3-weight and tied on a hopper. The first bend I fished held a nice brown that had my glass rod bent like a horse shoe. With a smile on my face, I walked down stream and fished my way back up. In one spot there was so much brush on the bank that I had to crawl through it to see if I could get a good angle on the run above. As soon as I peeked, through, I spooked one of the biggest browns I have ever seen in person. I caught some little browns here and there, found a raccoon skull, and had a big doe jump into the creek in front of me, scaring both of us before she grunted and ran away. It was nice to spend some time alone in the water, reflecting on the trip and what I had learned. 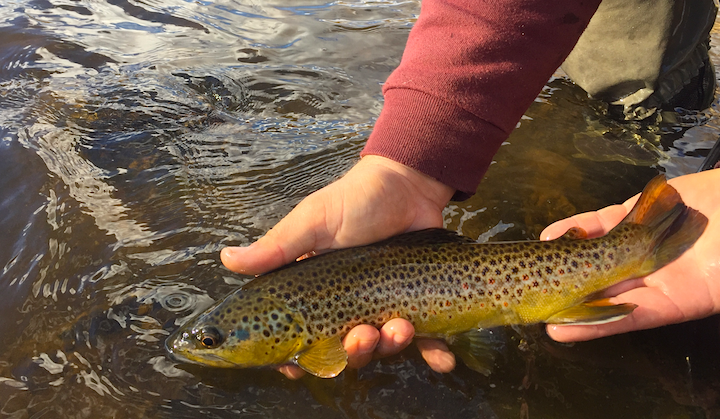 Not all the browns were huge, but the action was pretty consistent on the surface.
Photo by Jake Farley

Jake got off work, so I picked him up and we headed to another similar in town spot. We took turns fishing our way upstream, catching some more browns and seeing a couple huge common carp feeding in a slow pool. I would have fished for them, but I was not willing to risk the safety of my 3-weight just yet. We fished as the sun set and then went to a local brewery for some food and a drink to celebrate the end of a fun trip. Given that November can be unpredictable, I think we had some great luck, and I was happy to end it with a day of fish eating off the surface. I plan to get back out there this summer and catch as many of the native cutthroat species as possible and maybe even look for one of those trophy browns I see online. 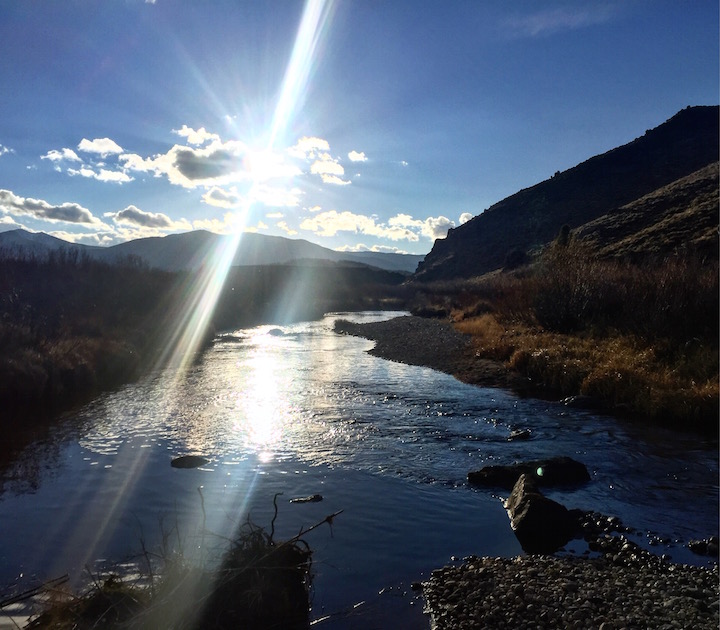 Trout live in some glorious places.
Photo by Tyler Coleman

Tyler Coleman recently moved from Arizona to Michigan. Check him out on Instagram at @thecolemancollection. He is a frequent contributor to this blog. 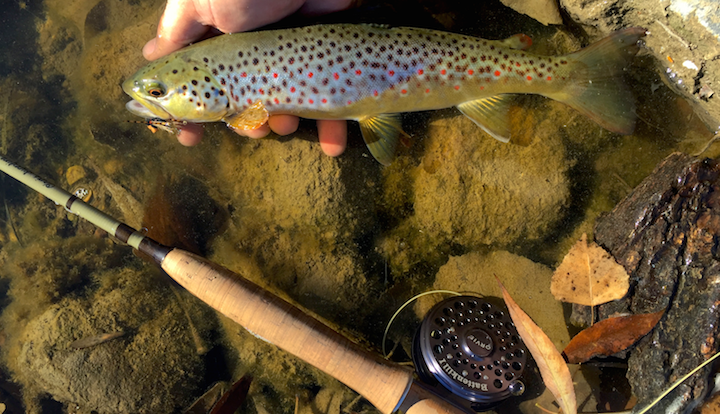 Casting hoppers on a 3-weight fiberglass rod in November was a treat.
Photo by Tyler Coleman

8 thoughts on “Photo Essay: A November Adventure in Colorado”