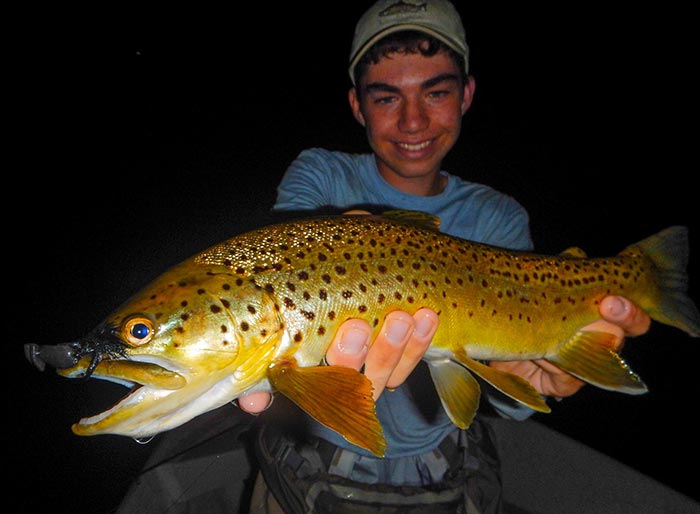 Morgan Krell shows off a gorgeous Delaware brown trout that fell for a mouse pattern.
Photo by Joe Cermele

It was a dark and stormy night–well, not stormy, but definitely dark–when Morgan Krell set out with Field & Stream Fishing Editor, Joe Cermele, and me on a nighttime mousing expedition on the Upper Delaware River.

Flip the calendar back a few months to when Rob Ceccarini, Fishing Manager of Orvis New York City, called and asked if Cermele and I would donate a fundraising trip to Project Healing Waters Fly Fishing. Knowing the work they do to help active disabled and veteran military people, the answer was an easy one. So we set up a night mousing trip to be auctioned off at the organization’s NYC event.

This is where Morgan comes in. He’s not your typical 17-year-old New York City resident. An avid fly fisherman and fly tier, he spends much of his after-school and weekend time exploring the urban ponds, creeks, and waterfronts in and near NYC for just about anything that might take his fly. If there’s a subway or train that will get him close to a spot, he’s there looking for whatever fly-fishing opportunity the city will give him. Morgan also happens to work part time at Orvis New York City in the fly-fishing department. The kid’s passionate, to say the least.

When he was a little younger, Morgan would talk his father, Ira Krell, into driving him to spots to fish, and as that relationship grew, Morgan’s dad thought he might as well take up fly-fishing, too, instead of just watching and waiting. In short order, dad also became skilled with a fly rod, and the two of them have since planned many family weekends and vacations around fly fishing. This connection, along with his charitable nature, prompted Ira to submit the winning bid at the Project Healing Waters event and give his son the trip as a combination birthday and Hanukah present.

The night of the trip, Morgan showed up with a box of Master Splinters and a few other mouse patterns that he had tied in anticipation of the night on the river. As a guide, I always want to know if a client can cast in the daylight, let alone the dark. Morgan put that concern to rest quickly. The kid can cast. Not only can he cast, but he’s a “stick.” Line control and accuracy were continuously in check . . . well, almost.

Morgan’s first fish was a healthy rainbow that grabbed his fly while we were drifting through a quick riffle. It was a nice fish, but not huge, and in the end, that turned out to be a good thing, as any line control issues were quickly brought in check never to be seen the rest of the night.

From there on, it was casting in the dark and working the fly in anticipation of hearing or feeling a pick-up. Several nice brown trout later, the night ended, all too soon.  I loaded up the boat with the satisfying feeling of having shared a boat with friends, provided a young fly fisher with a new experience on the water, and knowing that along the way our brave veterans would benefit from this great sport.

2 thoughts on “Photo: Mousing for Charity on the Upper Delaware”