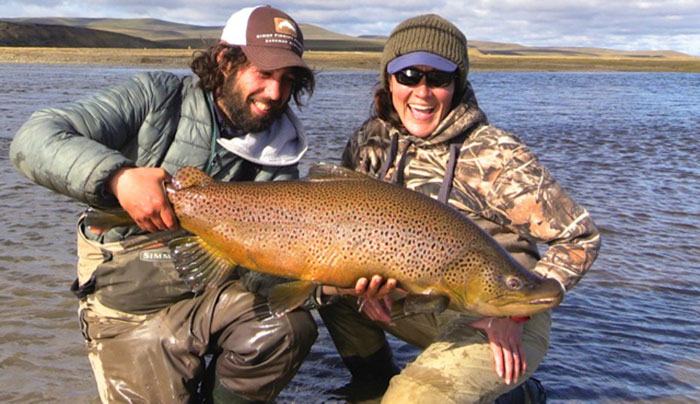 While fishing last month at Estancia Despedida on the Rio Grande in Tierra del Fuego, Argentina, Dr. Christine Fielding of New York landed a 30-pound brown trout. This fish was not only the largest of the week, but it was the largest caught on the river all season, as well. The behemoth was subdued on a 9-foot, 8-weight Orvis Helios 2, and it ate a size 14 Olive Scud hand tied by guide Tommy Lajous. The fish was released unharmed.

While Doctor Fielding came to Rio Grande hoping to land one nice, big brown (and boy did she!), she had no idea that she had caught the world record until trip host and U.S. fishing guide Mike Agee returned home and researched it. Because she had saved everything necessary to submit the fish to IGFA for a world record, Doctor Fielding figured Why not? How many people on earth ever get a chance to see their name on the top of that list? According to Jack Vitek of the IGFA, this 30-pound fish breaks all of the women’s fly-fishing world records for trout, and all but two of the men’s records.