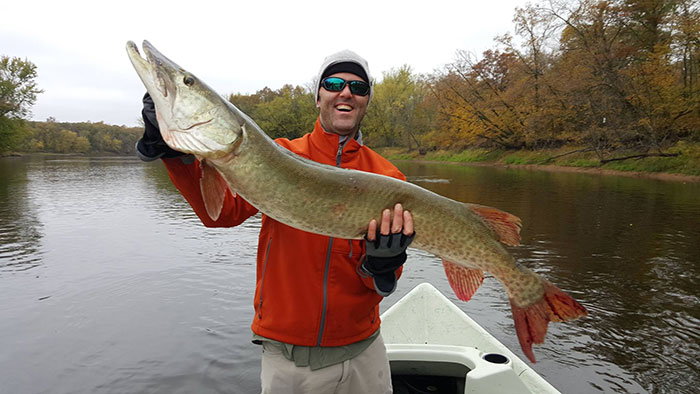 Not bad for Ryan’s very first musky on a fly, huh?
Photo by Kip Vieth

What do you do you do for an encore? A local musician client of mine recently wanted to try his hand at chasing some muskies. Ryan is a great angler and is very good at chasing smallmouth bass especially.

He’s has heard all the stories about muskies and has seen all the pictures. His boat mate that day was his good friend, Casey, who had moved a very large fish the year before. Needless to say, it didn’t take Casey much convincing to get Ryan to join him for the day.

The day stated great. Ryan was just a few minutes into the trip when he moved a nice fish but didn’t get a hook into it. Well, that lesson would serve him well. Five hours later, one of the largest river muskies I have encountered ate Ryan’s fly. He struck, and the rest is history. It was a true fish of a lifetime: 50 inches of Minnesota musky. So Ryan what will you do for an encore?

One thought on “Photo of the Day: A Monster Muskie on His First Attempt”