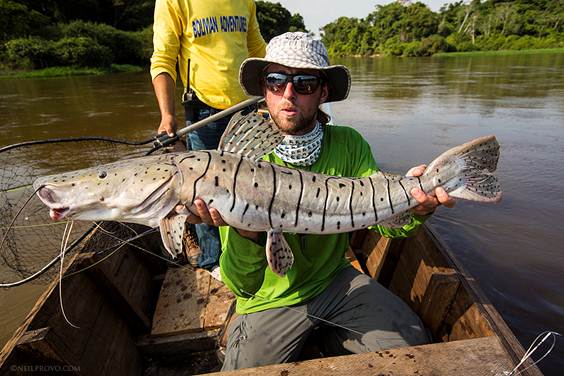 [Editor’s Note: You may remember Ian Provo from the killer film, “Steelhead & Spines,” that he made with his brother, Neil. Well, he’s on another adventure and sent in this photo and dispatch.]

This is probably the best fish of my life so far. Little did I know that my final cast on the 10-weight would send our 6-inch streamer through the air nearly 100 feet, only to be viciously assaulted within seconds of entering the murky water by this extremely predatory Surubí catfish. When I tried to land the beast, I was backed up in the boat with no where to go and was forced to flex the rod in a way that I shouldn’t have, which snapped the rod, and all hell broke loose. Right at that moment the fish was netted, he decided that he still wanted to fight and broke through the net. The broken piece of my rod instantly became tangled in the net and snapped yet again as the fish casually pulled out another 30 yards of line back into the river. In complete distress, I just grabbed the fly line and began hand-lining this beast back to the boat.

2 thoughts on “Photo of the Day: Hand-Lining Big Cats in South America”