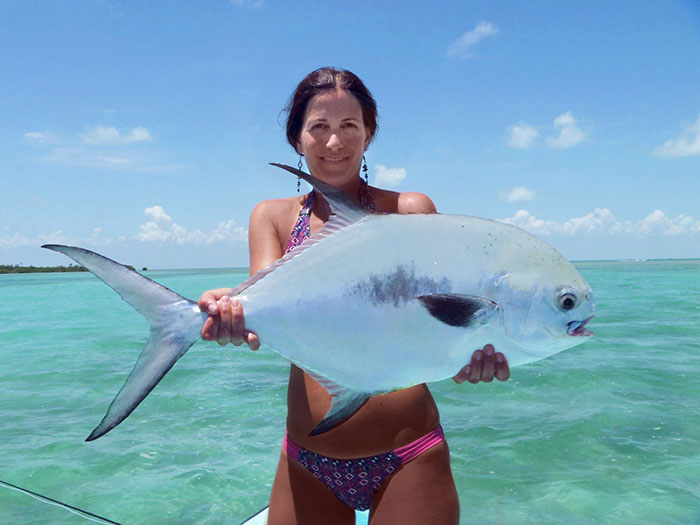 I went to Belize in April for a week long yoga retreat and planned on fishing…eventually. I chose Belize as a destination to try out both of my passions, yoga and fly fishing, and to do research for my business, Yoga on the Fly. I didn’t end up fishing during the entire retreat at the Ak’bol Yoga Retreat on Ambergris Caye, but I watched the boats go by each morning. I was enjoying the yoga so much that I knew the fishing would come later.

After the retreat was over, I was hanging out at the bar at Ak’bol and met a local who had his own flats boat and wanted to know if I wanted to go fishing the next day. I immediately said yes. We were very lucky that day to have two Belizian brothers on the boat, Darrell the guide and his brother Dave, who was a guide-in-training. Darrell took us to the spot where he’d seen permit the previous day; we were the only boat there. After searching for about 30 minutes, I was the first to spot the permit, which Darrell said was very good luck. It also may have been because I was so calm and in tune with myself and my surroundings from all the yoga I’d just done.

I cast to the school but was unable to get a chase. We drove around some more and spotted another school. I made the cast, watched a fish turn on the fly, and did as Darrell instructed, performing a solid strip-set on a monster permit! It took me an hour and I saw my backing five times, but I landed the 28-pound beauty. It was my first time ever permit fishing. I also landed a smaller permit on the next cast but it only weighed about five pounds. Needless to say I am completely in love with Belize and can’t wait to go back!

Amy Trina lives in Missoula, Montana, and operates Yoga on the Fly.

One thought on “Photo of the Day: Yoga Permit!”