Written by: Preston Ailor, Discovery on the Fly 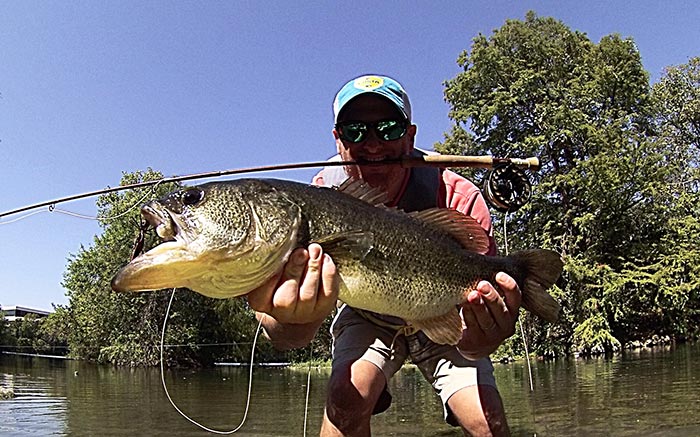 A little bit of planning and scouting paid off big on the morning of the wedding.
Photos by Preston Ailor

Several months ago, my wife and I received an invitation to a wedding in Austin, Texas. We immediately agreed that we had to go. So we started saving. My wife started planning: booking plane tickets and a hotel room, lining up someone to watch the little one, figuring out what to wear over her pregnant belly. You know, the important stuff. I, on the other hand, started looking at google maps.

I found that the Town Lake, the lake formed by the damming of the Colorado River, was only three blocks away from our hotel. I, not so surreptitiously, asked what our itinerary was for the day of the wedding. The pre-party didn’t start until 4:30, and we had nothing to do until then. So I drop the bomb. “If we have all that free time, would you mind if I brought a rod and tried to go fishing?” My wonderful, amazing, understanding wife said that, of course, I could go fishing. “You may never get a chance to fish Texas again.”

“Who are you calling?” my wife asked because I immediately picked up the phone.

“Orvis in Austin.” I grinned.

“Of course you are.” 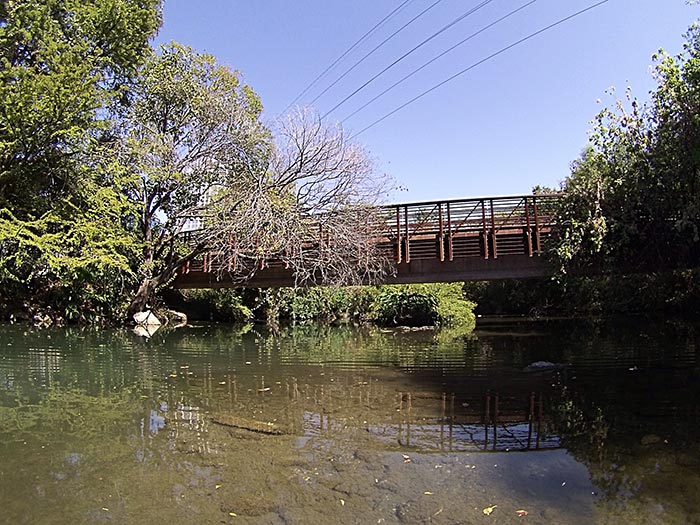 The bridge over the drainage bay offered a good scouting vantage.

I dialed and Bill picked up. I gave him the situation, and he laid it out for me. The normal bass and panfish stuff with a side of carp flies would do. I could handle that. I was still zero for the century on carp. But there was a catch, the place that I planned on fishing has very little access for a wade-fisherman. “But,” he perked up, “there’s a kayak rental place right there on the water. Pick one of those up and you’ll be good to go.” Bill is the man.

We got to the hotel on the Friday before the wedding, dropped our stuff off in our room, and hit the streets to see what we could find. “What way do you want to go?” my wife asked. “That way,” I pointed south. Immediately seeing through me, she said, “The river is that way, isn’t it?” I guess I actually am transparent. My suggestion of a nice walk beside the river was also received with caution. She saw people with Starbucks and suggested that if she got a Frappuccino first sh would be happier while we walk. We both acquiesced to each other’s suggestion, and we were on our way, drinks in hand. 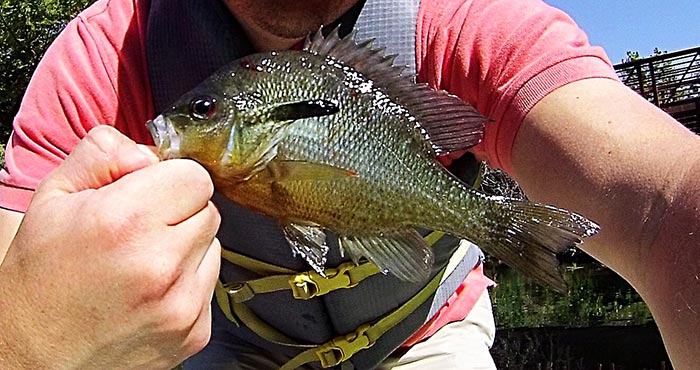 A few panfish, nothing special, kicked off the morning’s success.

There’s a beautiful path beside the river, and we took it. We reached a bridge that goes over a drainage bay that enters the river. It’s shallow with a deep channel, and there were fish. Lots and lots of them. Carp, brim, bass, turtles (not a fish), birds (also not a fish). But there was no good access to it. We walked a little farther and found the kayak place. I began to plan the next day’s antics.

After sleeping-in entirely too late, I dressed, picked up my Access saltwater 6-weight and my small box of flies from the suitcase, kissed my wife, and headed to the kayak rental place. $15 for two hours; I could swing that. I paddled around for a little bit, hitting various fishy spots, but there were a lot of people on the water and it was windy. I wasted little time paddling over to that little drainage bay. 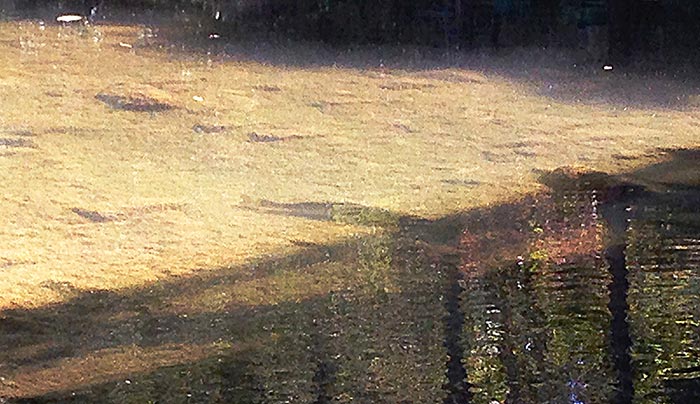 Aha! There’s a big fish, but what is it?

One side is a deeper channel and the other is a rocky flat. I tied the kayak to a downed tree and waded the flat under the bridge that I had scouted the previous day, casting a big white popper toward each shoreline. I caught a few bluegills, but nothing special. Wading a little bit farther I saw them. They looked like laid up carp in ankle-deep water. I cast the Boogle Bug but didn’t get a rise or a sniff out of them. Time to change flies. I tied on a brown crawfish pattern and plopped all about them. Still no reaction.

Frustrated, I decided it was time to get stupid. I planned to cast directly across the head of the bigger one and let my leader drag across him and wake him up. My casting hubris was high, and I cast exactly as I had planned (first time ever). Plop! The leader crossed the fish, and the fish started to move. I bounced the fly in front and both fish went after it. The line pulled tight and I was hooked up. Biiiiiiiig fish! I wished I had brought the 8-weight for just a second, but after very underwhelming fight, I landed the biggest bass I’ve ever caught. He was not too fat, but he was super long. My guess is he’d gotten big and lazy by sitting under the bridge eating the bread that people drop over the side to feed the fish. With no scale and no tape measure, I had to guess at his size. The biggest bass I’d ever weighed was four pounds, and this guy could about eat him so I’m guessing he was in the 5- to 6-pound class. 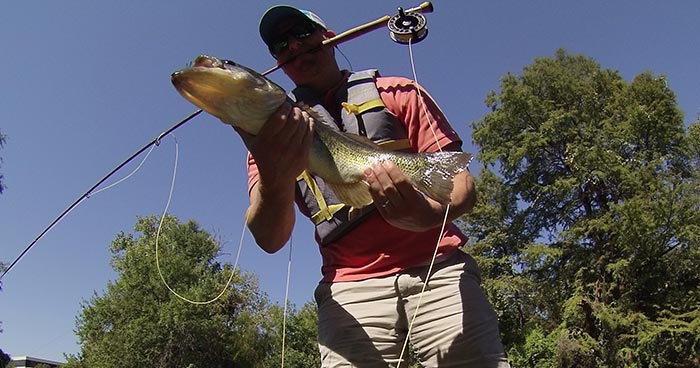 The long, snaky bass was the largest the author has ever caught.

A crowd had gathered while I fought the fish, and I got some “Wows” and “Oh my god’s” and “are you going to eat that’s?” I set up the GoPro and took a few pictures. I carefully revived the fish, and it swam off into the channel.

I took the time to pick around other fishy spots and picked up a few more bass before I headed back. I posted a picture to Facebook and Instagram, because apparently it doesn’t count if I don’t document it in that way. I got a comment from the bride-to-be asking if that was taken in Austin. “Yes it was, thanks for getting married. I’ll see you soon!”

The weather was beautiful and the wedding was awesome. Seriously, one of the most fun weddings I’ve ever attended. Later, at the reception, people were having drinks, taking pictures, and engaging in conversations. I told this story and showed the pictures to no less than everyone at the wedding including waiters, busboys, and bartenders.

Preston Ailor is from the Northern Neck of Virginia, the peninsula between the Rappahannock and Potomac rivers. He writes about fly fishing on his blog, Discovery on the Fly .

2 thoughts on “Photos: A Wedding-Day Bass in Texas”