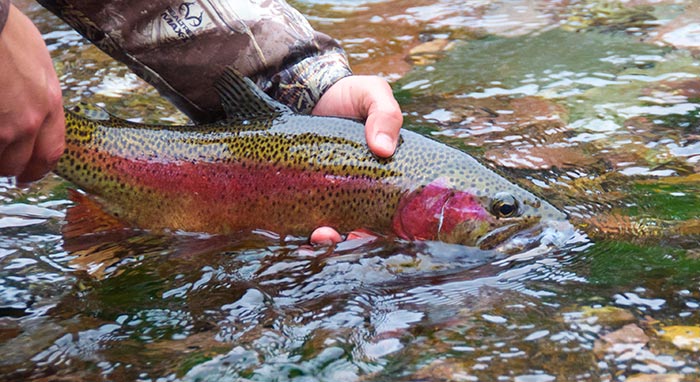 Big, beautiful rainbows are only part of the reason one fishes in Flaming Gorge.
All photos by Ryan Kelly

As John Gierach once wrote, “Fly fishing for trout is a sport that depends not so much on catching the fish as their mere presence and on the fact that you do, now and again, catch some.” Gierach states so plainly (rightly so, I believe) the eternal truth that anyone who regards fly fishing as a lifestyle, as opposed to a hobby, realizes at some point or another: fishing isn’t really about catching fish.

So what exactly is it about? The experience? The challenge? The scenery? What is it that makes a person spend more than $1,000 on a rod, reel, line, waders, and boots? The answer is one that’s different for every angler, and my answer is one that I constantly find myself redefining.  And exactly why I was out fishing the Green River this past weekend was a question I found myself asking shortly after arriving at the Little Hole boat ramp.

Anyone who’s fished the famed Green River below Flaming Gorge knows what an absolute circus Little Hole is. But just this past Sunday (the 13th of December), I pulled into an empty parking lot. Granted, there was good reason the parking lot was deserted. The road down to Little Hole was more ice than asphalt, and as soon as I stepped out of my car I hoped I had enough layers stashed away to fend off the wind’s biting chill. 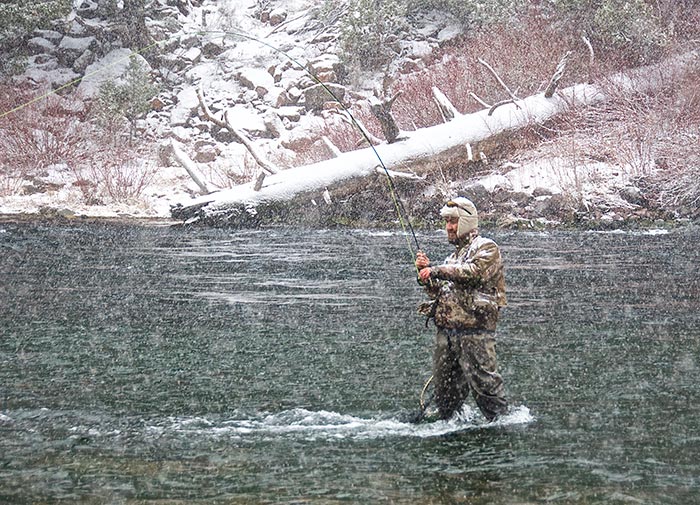 On this day, the author was the only human angler braving the elements at Little Hole.

About 45 minutes into fishing, I hadn’t had a trout so much as look at my offering (an egg and Zebra Midge combo), and I was beginning to think that maybe an afternoon spent relaxing at the resort would be a better use of my time.

Then I caught three fish in a row, big stout rainbows, and all thoughts of leaving were gone. The wind, the cold, the ice in my guides—I ignored it all because now I was catching fish. It’s an odd thing, really, how good fishing can offset even the worst of weather. Great fishing can make an angler willingly skip breakfast, lunch, and dinner if leaving the water for a second means leaving the fishing behind, with no guarantee it’ll be as good upon the return.

Eventually, though, I did leave the river, after the fishing slowed to the point where I started to notice the cold again, and the flecks of ice in my beard. I arrived back at the Flaming Gorge Resort after dark. I was the only guest at the lodge that night, which again, wasn’t surprising given the weather. The weather for the following day, Monday, was supposed to be just as miserable. 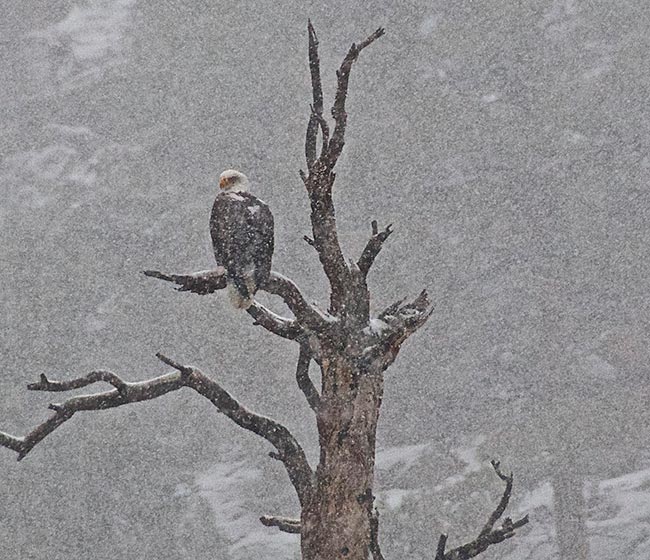 There was one fellow fisherman to be found.

I’d originally gone to the Green in search of a break. From everything, really. I make a living as a writer, and as any writer knows, there gets a point where a mental break is needed, a time when the brain can be emptied and not focused on crafting precise phrases or emotionally moving paragraphs.

But as I suited up on Monday morning and began fishing, this time with my friend Ryan Mosley (the project manager for Flaming Gorge and the Green River for the Utah Division of Wildlife Resources) I realized that I was back out on the water, in nippy weather, for a reason other than just escaping the detritus of daily life.

I was there for the solitude.

Ryan left after a few hours, for a meeting he had to attend in Manila. I broke for lunch, some chicken noodle soup, and then it was back to the river, back to the quiet serenity. This time I was fishing downstream from the dam, walking along the trail in a big empty canyon. The only other occupants were mallards and a bald eagle. So I guess I wasn’t the only fisherman out that day, but I certainly was the only one waving a stick around with the intent of hooking trout. 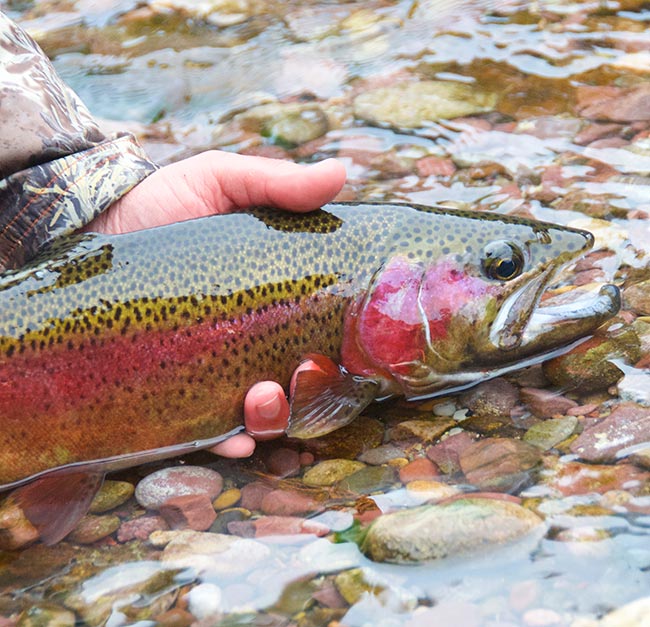 The rainbows don’t care how bad the weather is above the water.

It’s one thing to have a narrow mountain creek all to yourself, but to have the beautiful, snowcapped, red-cliff-lined upper section of the Green River utterly untouched by anyone but you? Well, that was something I won’t hesitate to call a once-in-a-lifetime experience.

The snow started falling around 1 p.m., just a few flakes carouseling slowly down to the water. A midge hatch started and stopped within the span of a half hour, and I caught a few fish. But the fish didn’t matter.

I’ve fished the Green plenty of times; I do live in Utah, and it’s the state’s premier fishery. But I’ve never really appreciated the upper section of the Green as I did that Monday when I soaked up the unmatched scenery in complete solitude. 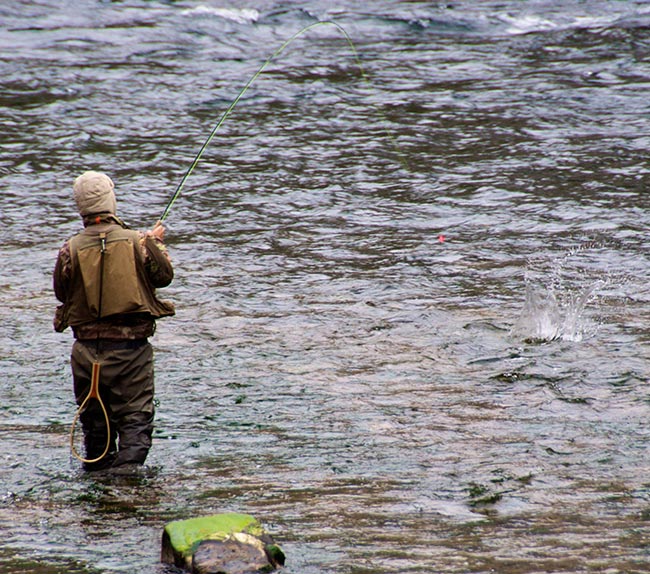 An egg pattern trailing a Zebra Midge was the hot set up for the cold days.

As all good things do, my solitude came to an end. I bumped into Ryan Kelly, whose photographs are featured in this post, as he was hiking down the river hoping to get some shots of the bald eagle fishing, or of fish rising to midges. He was kind enough to stop and take a few pictures of me doing my best impression of a fly fisherman before heading off downriver.

Eventually the snow started pouring down and the wind decided to make casting a nymphs on a 5-weight more trouble than it was worth. Of course that’s subjective statement, because who’s to say what’s too much work, and what isn’t, for more fish? But at that point I’d had my fill of great fish. What I was truly craving—the solitude—was gone. I wasn’t the only one on the river anymore.

Spencer Durrant is a fly fishing writer from Utah. A regular columnist for the Standard-Examiner, he contributes to Hatch Magazine, KSL.com, and Fishwest. He’s also Vice President of the Alpine Anglers of Trout Unlimited. If he’s not on the river, he’s at home tying flies or writing. Connect with him on Twitter, @Spencer_Durrant.

Ryan Kelly is the General Manager for Trout Creek Flies, a guiding outfit in Dutch John, Utah. He guides clients occasionally, but also loves hiking, climbing, and taking photos of the Green River. His photography can be found on Instagram. 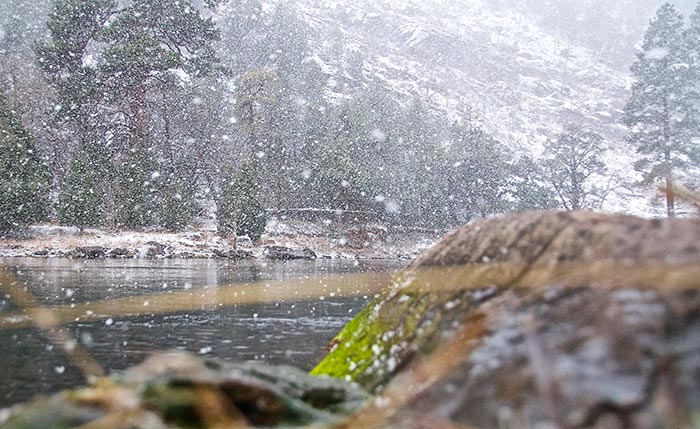 14 thoughts on “Classic Photos: All Alone on the Green River”