Written by: Will Long

Will Long ended his angling year with a 22-inch Colorado brown trout.
All photos courtesy Will Long

[Editor’s Note: Blog reader Will Long sent in this story and accompanying photos about how he ended his angling year in southwestern Colorado.]

So living in South Texas, I don’t often get to experience true winter fishing. We occasionally have some cold days down on my home river, the Guadalupe, but nothing like what the states north of us get. I traveled up to my second home in Lake City, Colorado to spend Christmas with my family. With lows averaging in the negative single digits and highs in the lower 30’s, I debated whether or not to take along my fly fishing gear, only for a slight moment though, and I am glad I decided to take it along! 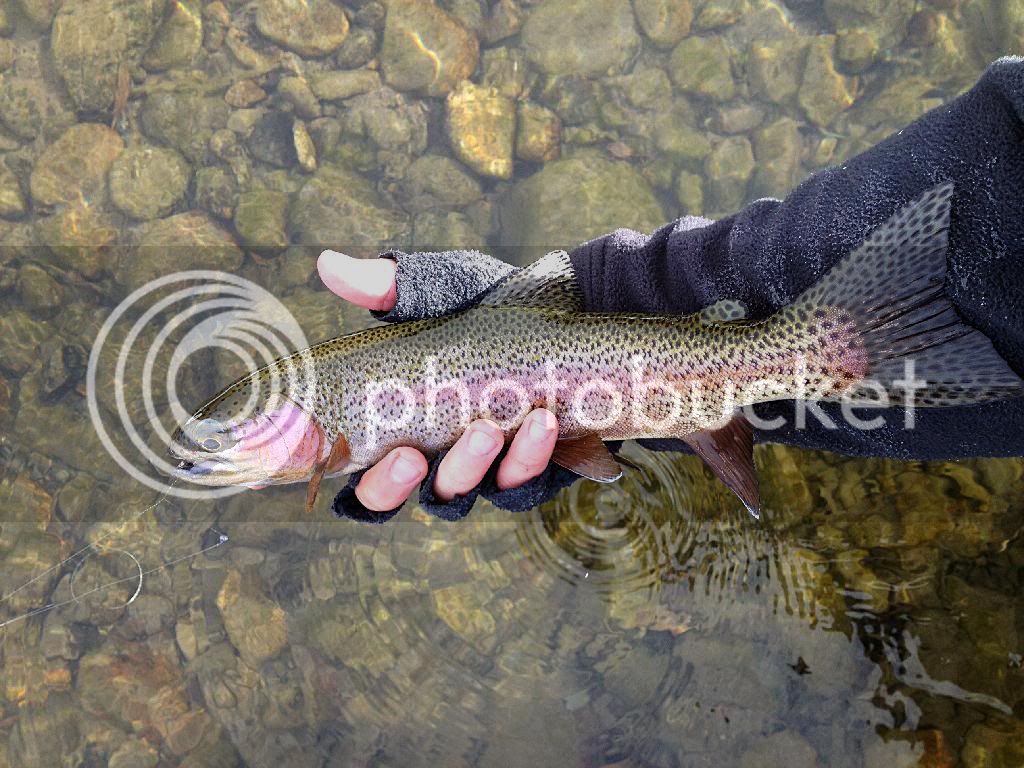 The majority of rivers in the area are completely frozen over, but after a little exploring I found some open holes that in the early and late afternoon looked like they might hold some fish. The first day I fished, I got out around one in the afternoon, the warmest part of the day, when it was in the lower 30’s. I walked down the road from the house and found a hole, next to a big bolder, that was open and looked deep! I set up a double nymph rig with a Beadhead Hare’s Ear Nymph, a Prince Nymph, and a couple split shot to drag them down deep. I did well the first afternoon, bringing in around a dozen trout in a few hours.

The following day, I decided to check out the outflow of Lake San Cristobal into the Lake Fork Gunnison River. A good long stretch of the Lake Fork Gunnison was open and looked fishable. Boy was it, and to top it off I, did not see another fisherman the entire time I was fishing! The first day I fished this section, I did ended up not moving more than 100 feet from where I got in the river, due to the abundance of trout. The water was not very deep, maybe a foot at most. I tied on the same setup I had used the previous day, minus the split shot. I ended up catching trout after trout throughout the afternoon: browns up to 19 inches and rainbows up to 17 inches. They were all stacked up on top of each other and looking for food being flushed out of the lake. I figured after catching a few they would be too spooked to keep eating, but I was wrong! They continued to eat what I had to offer all afternoon. I fished until the sun went down, and the ice on my eyelets and frozen reel were too much to handle. I ended up with over 50 trout on the afternoon. I knew there were some toads in there and I was going to be back for them.

I went back to the same spot with high expectations, and I was not disappointed. With it being my last day of fishing in Colorado and my last day of fishing for 2013, I entered the same area on the river I had the day before, knowing that there were trout hanging out. On my second cast, I hooked a beast! I fought the fish for a good minute or two and then made the all-to-common mistake of going for my net a little too early. After getting my net caught up on my vest and not paying attention to the trout at the end of my line, I lost him.

I figured I had lost my chance at the best fish of the trip and a pig to wrap up 2013. I continued fishing, catching browns averaging 14 to 16 inches, which I will take any day, but I could not get the fact out of my head that I had lost that pig. I fished through the afternoon, not having to move much up or down the river. I was getting close to the time where my fingers and hands did not want to work anymore, and I couldn’t feel my feet. I told myself I’d make just a few more casts before I packed up for home and wrapped up the year.

I made the same cast I had hundreds of times throughout the afternoon, and I snagged something on the bottom. As I went to give the snag a good yank, it took off, creating a wake in the river. What?! That’s no snag! It was the toad I had missed earlier. I kept my cool and fought the fish through several line-peeling runs and finally wore him out and had him at my feet before I went for my net. (Lesson learned.) It was 22 inches long and healthy, still sporting a nice kype and battle wounds from spawning. This brown wrapped up my fishing trip and closed out a wonderful year of fishing for me. I’m looking forward to what 2014 has in store!

8 thoughts on “Photos and a Story: Winter Wonderland in Colorado”