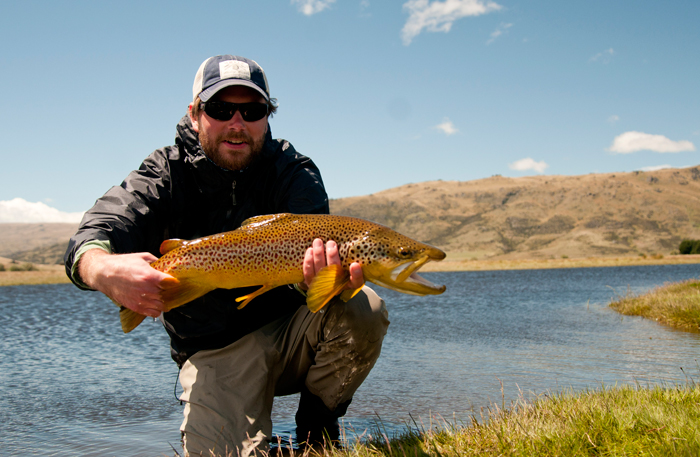 For years, New Zealand has been a dream for me. Mouth-watering mountain views, bright turquoise glacial lakes, more trails and adrenaline rushes than you could ever imagine, and most importantly some of the best and most challenging trout fishing in the world. This year, I decided it was time for me to do something about it. I applied for a working holiday visa, booked a flight, and here I am three months later. Clearly in over my head, I didn’t have a clue where to begin.

The goal was to buy a car and a map, then hope for the best. Before I left, plans changed a bit when I was invited to spend a week fishing the South Island with the Perkins family. With only a few years of fly-fishing experience under my belt, my excitement almost immediately turned into intimidation. Here I am, an impressively average fly-fisherman in a country known for its finicky brown trout about to fish with world-class fishermen and some of the leaders of Orvis. I stepped off the plane to a view of the Remarkables mountain range in Queenstown and forgot every single one of my worries. New Zealand is a place of fantasy, and I was about to experience it first hand. 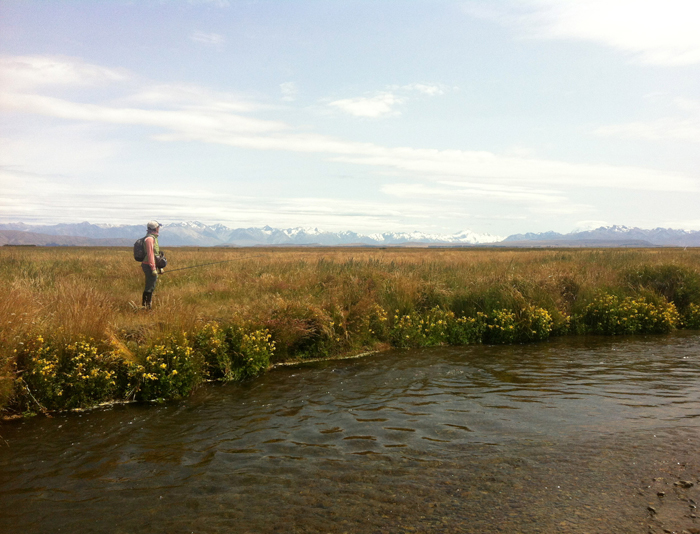 Weather is a tricky thing in New Zealand. For all of the beauty, sometimes you have to pay a price.  For most of the week, the price for us was wind…lots and lots of wind. On the first day, our head guide Dean Whaanga took us to a calm river meandering through private farmland. There were dozens of oxbows coming off the river throughout the field, and Dean told us confidently that the big guys like to hang out in those still waters. At first, I found this a bit hard to believe because most of them looked like nothing more than slightly flooded farmland, but he soon made a believer out of me. 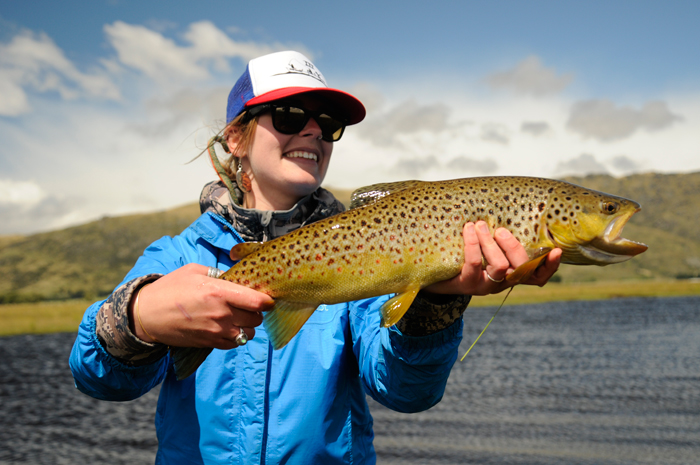 Hannah and I were fishing partners that day, and we were guided by Henare Dewes. With gale-force winds all day, he had his work cut out for him, but he found us great spots along some of the more promising oxbows with our backs to the wind. We began working our way up the bank, dapping our blowflies along the calm edges hoping to catch the attention of any cruisers. Soon enough, Hannah had one hooked. From down the bank, I watched her rod bend and then heard a sigh of disappointment as the trout jumped out of the water and broke off. I could overhear her saying to Hen, “That’s the biggest trout I’ve ever had on the end of my line.” Welcome to New Zealand. Only a few casts later, she had another one hooked.  Although not as big as her first, this one made it to net and became her first NZ trout. Mine followed almost identically: I broke one off as I watched it jump away with my fly and shortly thereafter landed my first NZ trout. That was pretty much the extent of our first day of fishing. Over here, it’s rarely a numbers game, but what we missed in quantity was surely forgiven in quality. 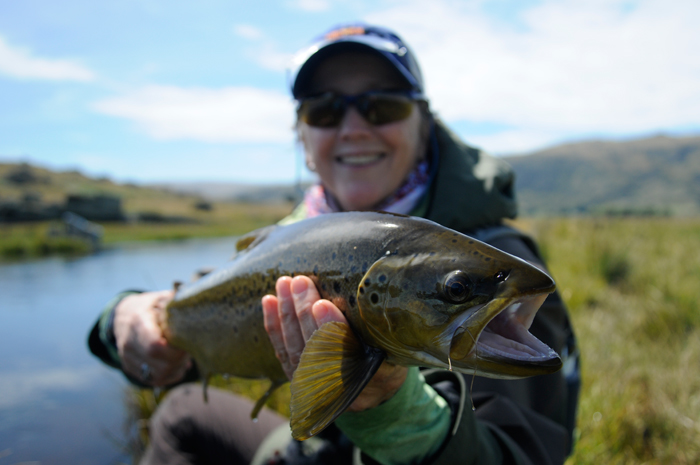 Nancy was willing to work hard for her trout.
Photo by Hannah Perkins

On the second day, I fished with Nancy and she likes to chat. On the ride to the river, we had a great time talking about fishing, travel, the meaning of life, you name it. We were fishing for rainbows in a gorgeous canyon. Although Dean liked to refer to rainbows as “trash fish,” I was very excited because I had never caught a wild rainbow before. Let’s just say I still haven’t caught a wild rainbow. Hen hiked us downstream about an hour and we fished up along steep ledges.  Throughout the day I, managed to hook two nice rainbows and subsequently broke them both off.  It was a bit frustrating but par for the course. When I’m used to catching 16-inch stockie rainbows in New England, I guess a 26-inch wild rainbow might come with a bit of a learning curve. 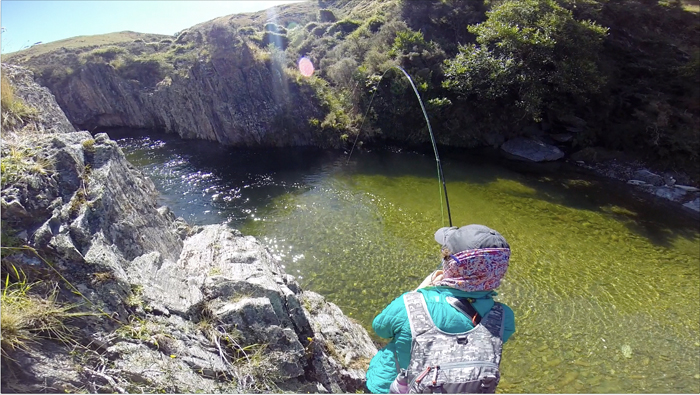 The “mountain goat” position from which Nancy hooked a tough fish.
Photo by Chris Budro

Nancy on the other hand, had it all figured out.  As the day ended, Hen spotted a trout at the bottom of a deep pool surrounded by steep ledges. It was pretty much the worst spot in the river to catch a fish. Nancy propped herself up on a precarious ledge and began casting a naked nymph backward into this pool. The water was too clear, and the pool too deep to use a strike indicator.  Given the extremely awkward casting position, it took several casts to get the nymph in the right spot, but when she did she watched her fly line hesitate and set the hook perfectly before Hen even had a chance to shout “set!”  It was quite a sight watching her fight this fish on a ledge no larger than her foot while Hen scrambled down the hill to get the net in the water. The big, beautiful rainbow was landed, photos were taken, and he was released with just enough time to make back to the pub for dinner to tell everyone Nancy’s “mountain goat” fishing story. 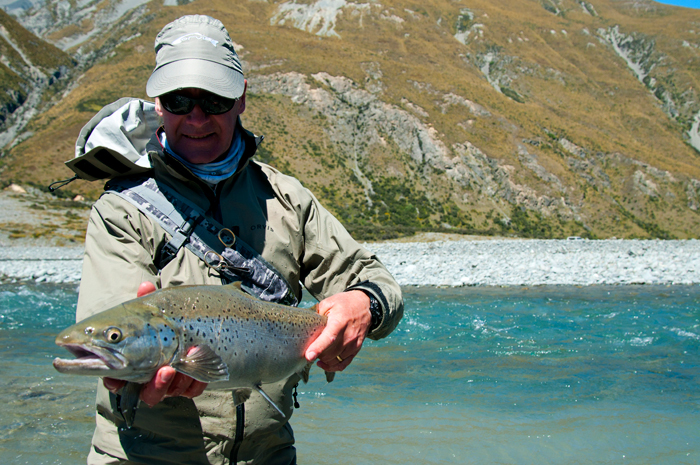 On day three, I fished with Dave, although I should probably just call it a private casting lesson. It was another tough day of wind on a wide-open river, and finding fish proved to be a struggle. I managed to catch one on a dry in the calm of early morning, but as the wind picked up, the fish I could find remained safe from my wind-tangled fly. The highlight of my day was watching Dave cast to a rising fish. The fish was quickly cruising the shallows of an oxbow and rising in a zigzag line up and down the banks. In a matter of seconds, Dave had his fly unhooked and gently placed on the far bank exactly where his cruiser was headed. With no surprise, the trout was hooked on the first cast. Even watching the hook set was a thing of beauty. The entire process seemed like one fluid motion from start to finish. For the rest of the day, I watched him cast straight into the wind using less effort than I do on a perfect day. I felt like I was watching Mr. Miyagi, hoping that somehow if I watched him long enough some of that skill would wear off on me. Sadly, it never did. 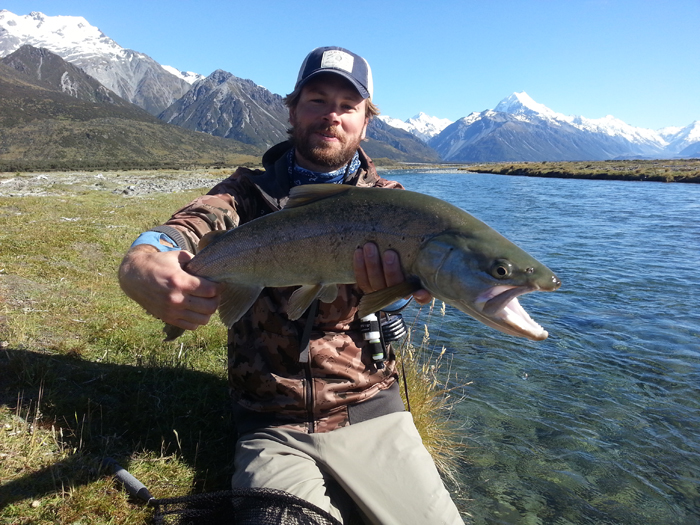 Chris had an adventure he’ll never forget and had a vision of a fly-fishing life.
Photo by Henare Dewes

Every day was a completely different experience. We fished on open plains, in a deep canyon, in a river valley overlooking the tallest peaks of New Zealand and even in a small spring creek where the trout would aggressively rise like clockwork at 4 p.m. every day. Unfortunately, that didn’t make them any easier to catch. Each night, we would all regroup for dinner in whatever small town we were stationed and trade stories of the day. This was quite possibly my favorite part of each day.  I felt a part of a fly-fishing family. We would drink great NZ wine and make fun of each other. If Nancy got her way, we would play liar’s dice after dinner, and I was shown no mercy as a rookie. Very soon, I felt ridiculous for having been intimidated. They treated me like family, and I couldn’t have asked for anything more. It was the perfect introduction to New Zealand, and a fishing trip I will certainly never forget.

17 thoughts on “Classic Photos and Essay: A Trip to Remember on New Zealand’s South Island”