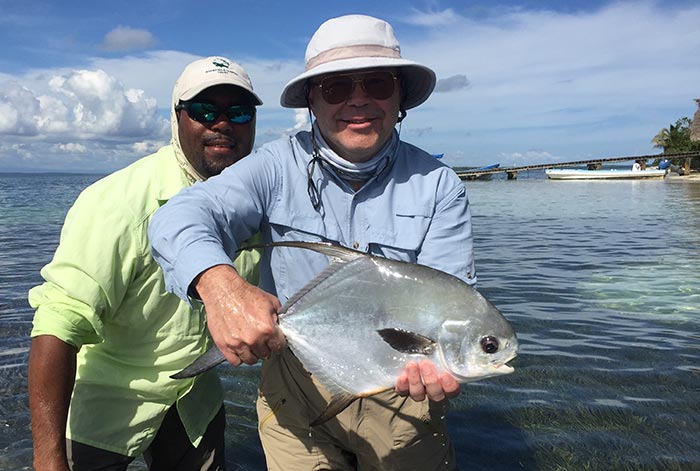 John Kelley proudly holds a permit he landed with the help of his guide, Yogi.
Photo by Reid Bryant

A few weeks back, my wife, Kim, and I travelled to Punta Gorda, Belize, to serve as hosts on Orvis Adventures hosted Couples Week at Belcampo Lodge. This week was intended to give anglers and non-anglers alike a taste of Belize’s remarkable flats fishery, as well as a look at the remarkable physical and cultural landscapes that give life to the country’s southern coast. What we discovered by week’s end was all of that and more.

It is hard to paint an effective picture of Punta Gorda. The charter flight from Belize City carried us south along the coast, dodging in and out of rain squalls, allowing us intermittent views of a mangrove jungle that spread for eternity. Lagoons and cays gave way to low expanses of flat fertile ground, where rice and sugarcane were cultivated in rectangular plots. Farther west, the inland mountains rose in green, tree-clad pinnacles. Along the coast, clusters of buildings appeared at intervals, comprising the small municipalities of Dangriga and Placencia. Nearing the Guatemalan border, we came in low over the Punta Gorda airstrip, landing as the sun broke the clouds, and stepping out onto the tarmac in the heavy heat of a tropical afternoon.

We’d come a day early to fish, and both Kim and I had our sights set on a flats day to follow our first evening at Belcampo. Though we’d heard that the lodge and associated farm were magnificent, we had permit on our minds, and our true purpose was singular. That all changed abruptly when Jose, one of Belcampo’s longstanding guides, picked us up at the airport. In a smiling and unhurried way, Jose loaded our things into the open-air Land Cruiser and headed us through the little town of PG, waving to everyone he saw, telling us all about the local community, the nearby coast, the regional commerce. As we crept through the town, children giggled in doorways, shucking off school shoes to play in the side streets. Dogs wandered back and forth in front of us, and Jose would honk and wave, seemingly a friend to everyone.

You slide quickly into a different pace at Belcampo, where everyone seems to smile continually, to do things with intention and care. What’s more, it’s hard to feel anything less than awestruck by the beauty of the landscape surrounding Belcampo’s lodge. Perched high on a mountain in the jungle canopy, the lodge opens up to views in every direction. Toucans and howler monkeys rustle the treetops, and palms and succulents, heavy with flowers and fruit, fill the forest. Kim and I took a drink at the bar, where Ducky and Tim, the resident bar men, muddled home-grown ginger, sage, mint, and sugarcane into rum drinks that were savored, rather than tossed back. Soon the quest for permit became something that awaited us, and the present became the present: rum and sage and sugarcane, smiling faces and easy conversation, and the smell of fresh corn tortillas frying in advance of the evening’s meal. 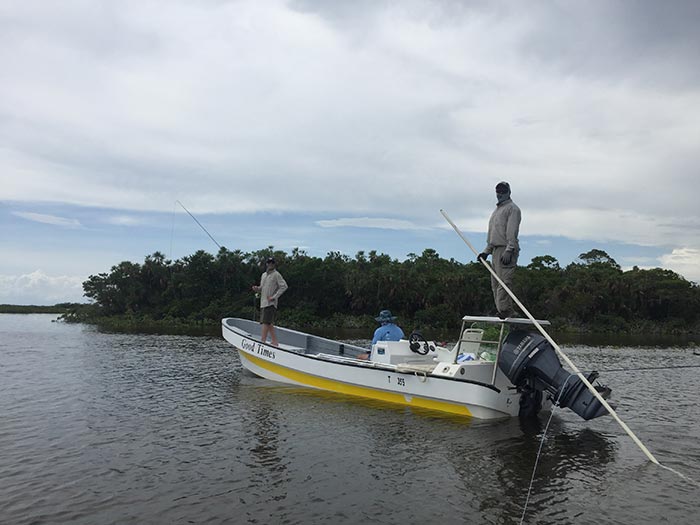 Kim and I did not manage a permit on our day together. Under the watchful eye of reknowned guide Oliver Garbutt, we took a few shots and missed, feeding one fish late in the day on a hail-Mary cast to 10-o’clock. Kim reminds me still that a trout-set is inopportune when setting up one’s first permit, but I now have fodder for a year’s worth of nightmares, until I get a shot again. We returned to the Lodge that night, sunburned and happy, eager to meet our guests and issue in our first night together as a group.

The first night was wonderful, owing largely to the warmth of the Belcampo staff. Kim and I, having travelled and hosted internationally a fair bit, always say that the best trips occur when guests feel less like guests and more like welcome friends. From the get go, the Belcampo staff set this easy tone, this warmth. All of the details were in place and tended to under the watchful eye of the lovely Shirleymae Parham, who oversaw our group, and made certain that our needs were met. It was a lovely and orchestrated dance that Shirleymae choreographed, wherein our guests relaxed at once into the tranquil pace of the jungle, knowing that all was well. Drinks were clinked and taken to the deck, where the anglers cast wistful glances seaward, and asked how the fishing had been.

A snorkeling excursion with the chef ends with a fresh seafood meal.
Photo courtesy Belcampo

Needless to say, the permit fishing that followed was tough. Weather was less than idea, resulting in fish that fed out to deeper water and light that made for tough spotting. We had a couple late starts and a couple rejections, but fish were caught by nearly all, with bonefish rounding out the permit-less days. The Garbutt Brothers are known internationally as some of the finest permit guides in the world, and their skills were put to the test on our behalf. The finest moment I bore witness to was when Yogi, who’d been poling me and guest John Kelley to hell and back for days, spotted a permit well behind the boat, spun us 180 degrees, and negotiated a layup of a cast for John, who matter-of-factly caught the fish. I couldn’t tell for sure, but as the reel sang, I thought I saw Yogi whistling along through his buff.

Nights were a pleasure of food and just being together, swapping fish stories and seeing what Ducky and Tim could do with Belizean rum and a farm-load of fruit and spices. Heading upstairs, we languished over meals of snapper collar, farm raised ribs, snook and plantain mash, chilaquiles. We retired each evening praying for sun, often awakening to the sound of raindrops instead, or sometimes howler monkeys, whose calls were disproportionately loud and eerie. We soldiered forth each day in search of fish, and found them, or happily navigated a beautiful place drinking Belikin beer and watching the frigate birds spin. Those dry-land types explored the jungle and the Mayan ruins, made chocolate or speared lobsters, spending one memorable day out on the cays, snorkeling with Chef Renee and Captain Jackie. With a grill filled with lobster tails, we quenched our growing appetites with conch ceviche on home-made chips, spiced up with lime and local peppers. We were royals for a day that day, well aware that if Michelin gourmands were to happen by, they’d have now doubt joined our happy crew. 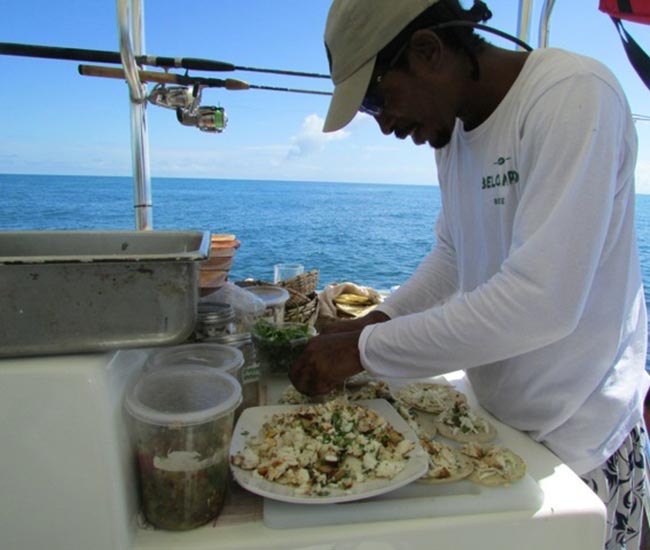 On the final day, there were, of course, some tears, which are the barometer of success for any group trip. There were sunburned noses and permit stories and pledges to return. There were permit I’m sure, out in the lagoon, giggling piscine giggles at our blown shots, and their absolute superiority. But even in the leaving there was that ease, that quiet happiness, that permeated the place, and permeated all of us, leaving a little bit to linger in our souls. Maybe that’s what we look for in travel after all, even travel with a purpose as tangible as permit. Maybe it’s just to find those magical places where we can breathe out, relax, and just be for awhile, knowing that nothing could be finer.

Join us on next year’s Orvis Couples Week at Belcampo, from November 3 – 9, 2016. for more information, contact Orvis Adventures (800-547-4322; orvisadventures@orvis.com). Click here to check out all Orvis Special Events. 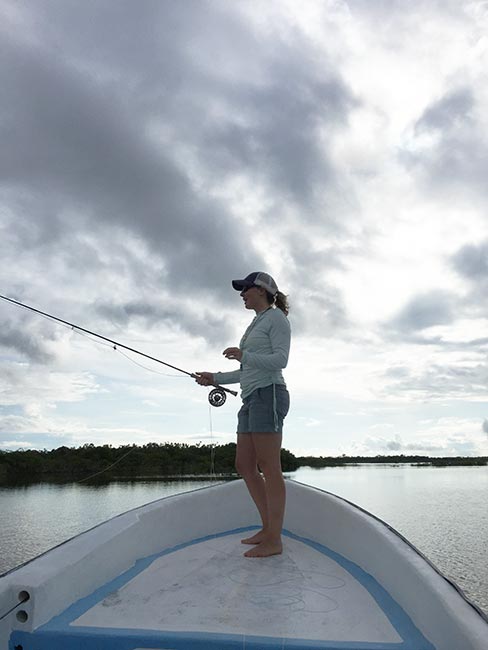