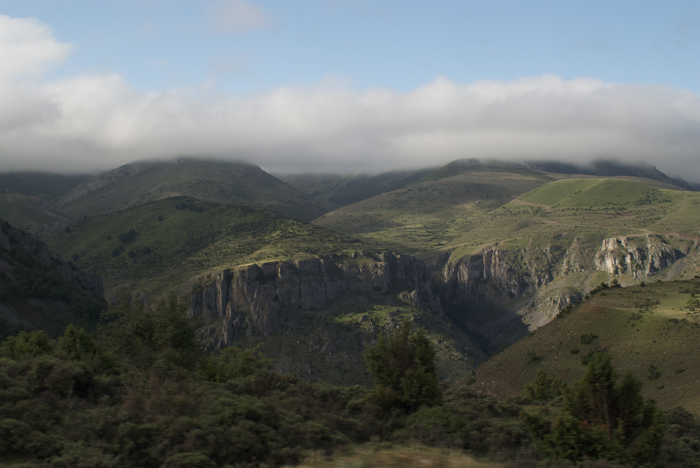 The mountains of La Rioja are beautiful and riddled with trout streams full of small, wild trout.
Photos by Sandy Hays

The water was almost over the top of my chest waders, and I struggled to make a delicate presentation to one of the three large trout rising under an overhanging tree limb fifty feet upstream. We were fishing a slow, flat section of a medium-size tailwater, and the wary fish just barely dimpled the surface as they fed. As I pondered the wisdom of taking another step, my concentration was shattered by a two-foot brown trout launching itself into the air 50 yards upstream. The trout glowed golden in the evening sun, and it seemed to hang in midair for an instant before crashing back to the surface. I turned to Luis and Sandy standing on the bank, and they both looked as if they’d seen a ghost. Unfortunately, there was no way to get a cast to the huge trout, which jumped two more times as if to taunt us. Eventually, I gave up on the three risers, and we headed back to the car shaking our heads. 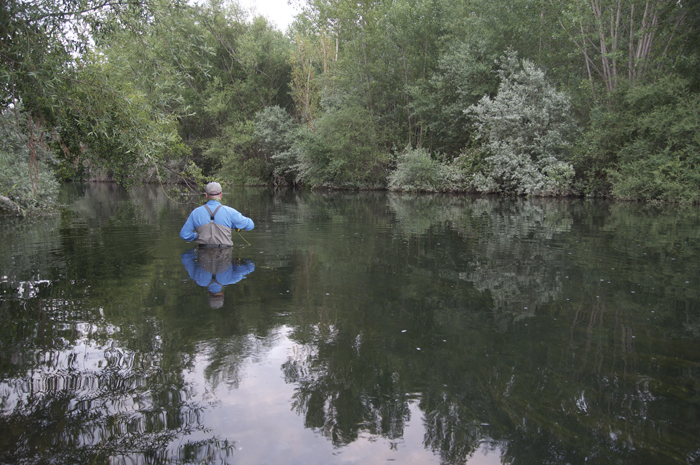 The author fishes to three rising, but ultimately uncooperative, trout on the Orbigo River.

It’s a story that wouldn’t seem that unusual on many rivers in the U.S., but we were an ocean away, on the Orbigo River in northwestern Spain—hardly a dream destination for trout fishing. Although not well known for its fly fishing, the Spanish countryside offers anglers many different kinds of water, from the Atlantic salmon rivers of Galicia, to the fertile tailwaters of Castilla y Leon, to the tumbling mountain streams of La Rioja and the Pyranees. In general, the quality of the fisheries isn’t going to make you forget about Montana, but there are trophy stretches, mostly on tailwaters such as the Orbigo, where fish over 20 inches are not unusual. Everywhere we fished in Spain, the scenery was spectacular, the waters were uncrowded, and we had the pleasure of catching browns from their native streams—something you can’t do in this country. 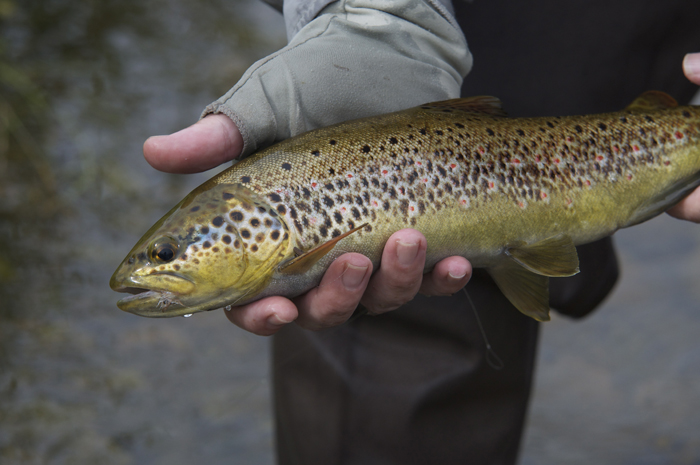 Luis landed this beautiful brown on a dry fly in the tailout of a run.

Gathering of the Clan
Spain’s fly-fishing community is relatively small and close-knit, and most years, a couple dozen guides, shop owners, and prominent anglers gather in the mountains of La Rioja for the Encuentros Internacionales de Pesca de La Rioja (International Fishing Meet of La Rioja). It’s an opportunity for the local tourism department to show off the area’s angling opportunities, and attendees get a chance to hang out with old friends and compare notes on the state of the sport on the Iberian Peninsula. I and my friend/photographer Sandy Hays attended the 2009 event, the fifteenth, in which the group convened at Venta de Goyo, a centuries-old inn tucked into the rocks at the upstream end of the 12-mile-long Najerilla River Canyon. Aside from the Spanish contingent, guests came from France, Scotland, and Austria, and my photographer friend Sandy Hays and I represented the U.S.A. 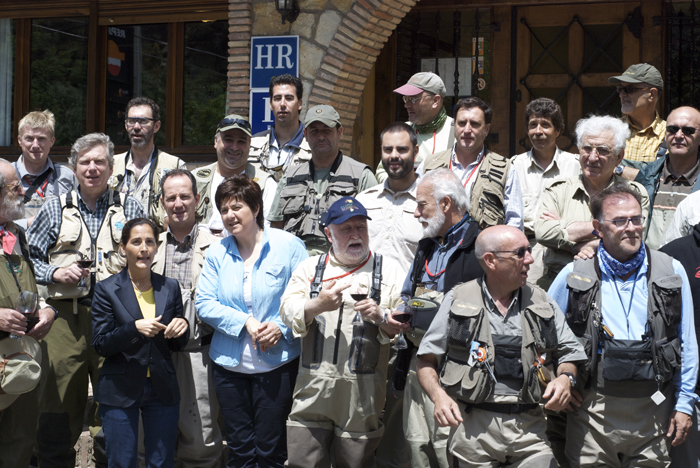 Having spent two days fishing with our host, Luis Quesada Barbado, on the Orbigo and Ucero near the city of Leon, we made the scenic drive to La Rioja and arrived at the inn just before dinner. Many of the attendees had already arrived and were hanging out in the bar swapping stories and showing off their latest fly patterns. Luis introduced us, and we attempted to make conversation, despite the fact that neither Sandy nor I speaks Spanish. No translation was required, however, when someone showed us a cell-phone picture of an 8-pound brown that his brother had caught from the lower reaches of the Najerilla earlier that spring. No matter where you live, that’s a big trout. We finally ran into fellow English speakers Ally Gowans—inventor of Ally’s Shrimp, a popular Atlantic salmon pattern—and his son Andrew. 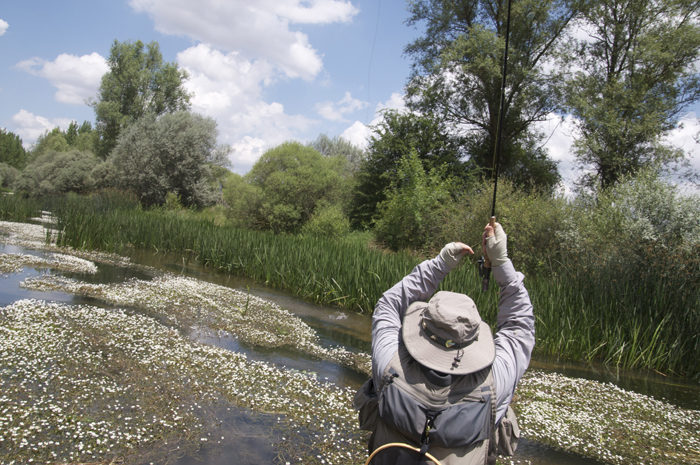 Luis fights a small brown among the weeds of the Ucero River.

The life of the party was a diminutive fellow called Cholo, who used a hidden magnet to make a handful of worm flies stand up and dance in his hand as he walked through the crowd. Later that night, when everyone retired to a back room at the inn for an impromtu musical performance, it was Cholo who took up the guitar and brought down the house with a song called “Blues de la Moscarilla,” with many in the room singing along at top volume. The song’s chorus goes:

Con la plata con la oro,
Con la verde o la amarilla
Me da igual, por que ya
Solo pesco a Moscarilla.
(With the silver, with the gold,
With the green or with the yellow,
I don’t care because from now on
I fish only with my Moscarilla.)

It’s not every day you hear a blues song with lyrics that detail the virtues of a trout fly. It turns out that La Moscarilla is an odd spinner-fly pattern designed by Cholo himself—his real name is Jose Manuel Ruiz Perez—and he just happens to be one of Spain’s better-known tiers. He’s busy enough that tying is his full-time job, and he’s known for many other innovative patterns, as well.

Cholo ties his Moscarilla, a kind of spoon fly, in a wide variety of colors and patterns.
Photos via moscasorbigo.com

When I sat down with Cholo the next day to discuss his favorite flies, he broke out box after box of patterns that ran the gamut from ultra-realistic moths, bees, and grasshoppers to garish baitfish imitations and countless variations of La Moscarilla, with its signature “blade” wing. He works equally well in foam, epoxy, and more traditional materials, and all his flies show the clean lines and attention to detail that are the hallmarks of a production tier. It was only with great difficulty that he settled on the five patterns shown here, and he changed his mind two or three times over the course of the meeting. 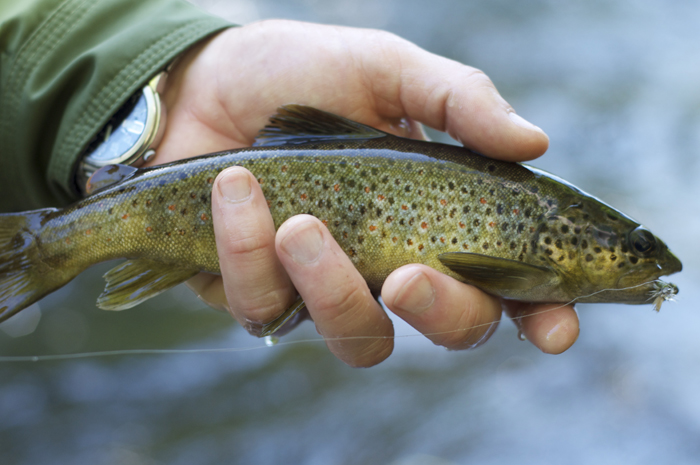 The Mediterranean brown trout has faint, dark bars on its sides.

The other highly skilled tier in the group was Carlos Fernandez Solo De Zaldivar, whose nickname El Jabali (the wild boar) reflected his burly physique and aggressive gregariousness. His loud voice, deep laugh, and wild gesticulations made him stand out in a crowded room, and he was clearly one of the more popular attendees at the Encuentros. A hardcore angler, El Jabali served as the head guide for the event, and he provided each guest with a box of flies to use. 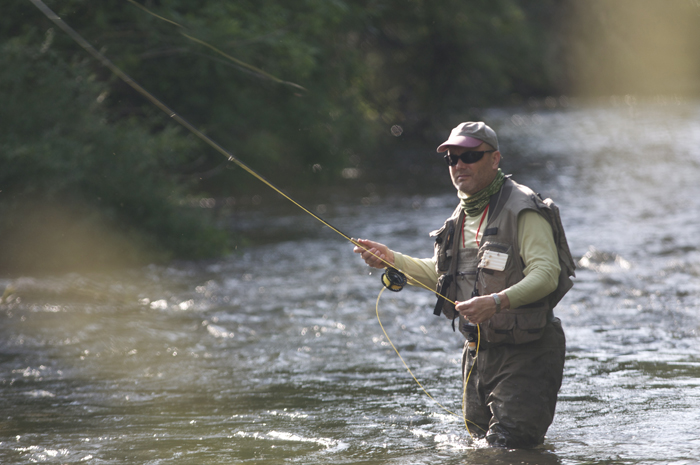 The author casts on a small tributary of the Najerilla.

Whereas Cholo’s patterns tend toward the modern and innovative, using foams and lacquers, El Jabali’s stick to more traditional materials, are more delicate, and are clearly meant to be impressionistic imitations of specific hatches. These are fish-catching flies, rather than patterns designed to wow the fisherman, and some seem pretty rough around the edges. He uses a lot of CDC and the local Gallo de Leon feathers. (Spaniards get very annoyed when you call these “Coq de Leon,” since “coq” is a French word.) His dry flies especially tend to be tied with slight bodies and sparse wings, almost like traditional Catskill patterns. 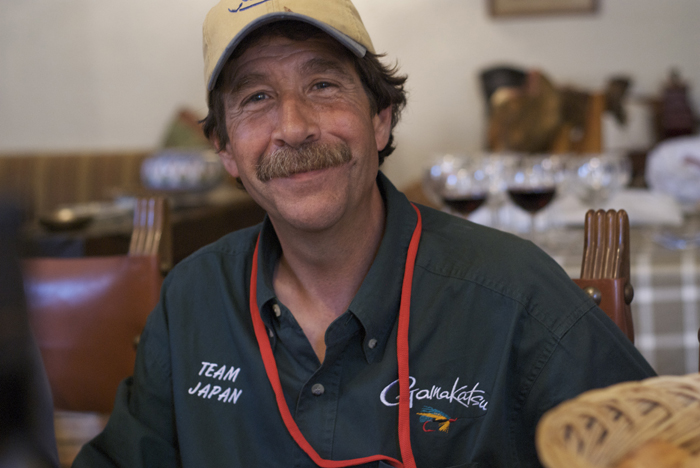 Cholo served as an advisor to Team Japan when the Fly Fishing World Championships were held in Spain.

Trucha Tales
We fished two days on the Najerilla River and its tributaries and then hopped over the mountain range for a final day on the Iregua River. Luis had warned us that we were a little early in the season for the mountain waters, which meant cold water and few hatches, but we caught trout in every spot we tried. The first morning, we fished a mountain creek that looked almost exactly like the brook-trout streams of my native Vermont. And just like back home, things started off slow and then picked up as the sun warmed the water. 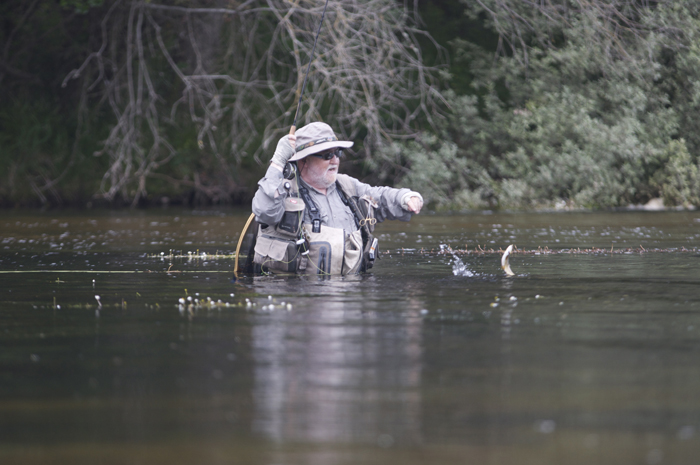 My first fish was a beautiful six-inch native brown with prominent parr markings and a few muted red spots toward the tail. Five more trout followed that morning, three taken from a single shaded run beneath overhanging tree limbs. The biggest of the lot was just 10 inches long, but they were all pretty, wild, and native. 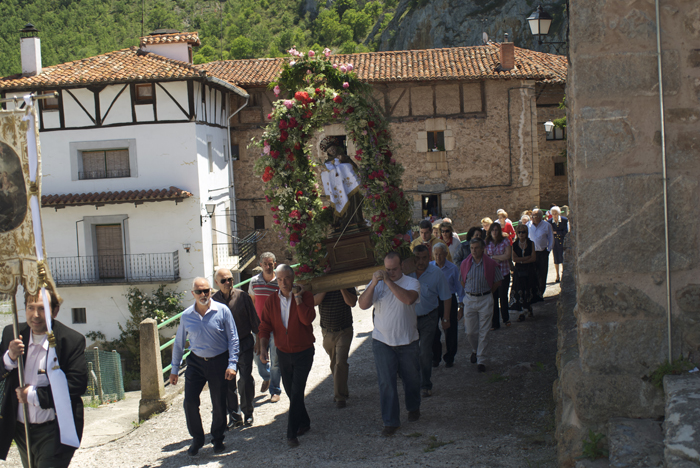 A procession for the Feast of Saint Anthony passed by our lunch spot one day.

That afternoon, we tried the Najerilla itself at the lower end of the canyon, and right away, I found a pod of stocked rainbows (or plasticos) holding beneath the mouth of a feeder creek. My Beadhead Pheasant Tail Nymph took three of these “exotics” on consecutive casts, at one point, and I found my disdain for these interlopers growing before it dawned on me that they were fellow Americans. I found some more browns farther upstream, and they were thicker and more colorful than those we’d caught in the morning. I was still searching for my Spanish lunker when an apocalyptic thunderstorm rolled in and drove us off the water. 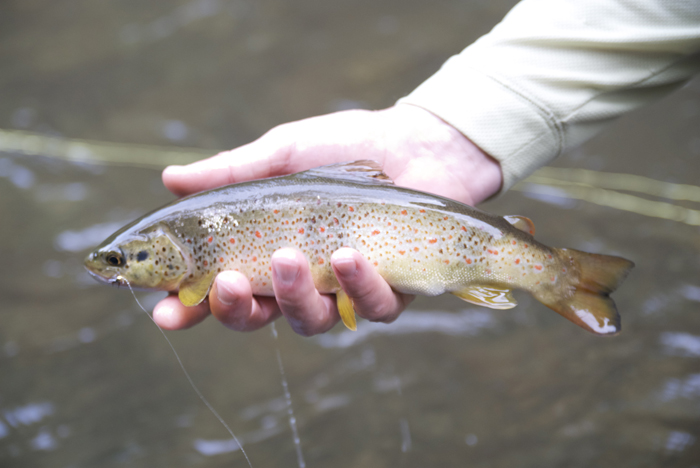 The next two days proceeded in much the same way. We saw none of the big fish we had seen around Leon, but the action was steady and the water was gorgeous. The countryside was stunning, the company was interesting and welcoming, and the food and wine were outstanding. Before this trip, I had never even considered traveling to Spain to fish, but I already went back once and can’t wait to do so again. 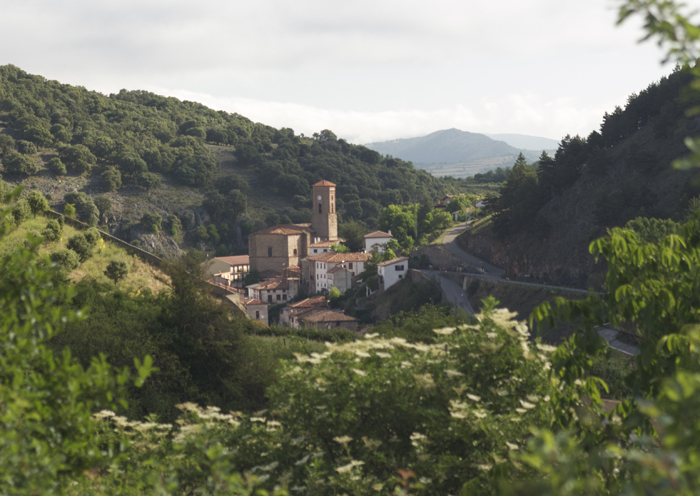 You can’t turn a corner in La Rioja without being greeted by a stunning vista. It is beautiful country.