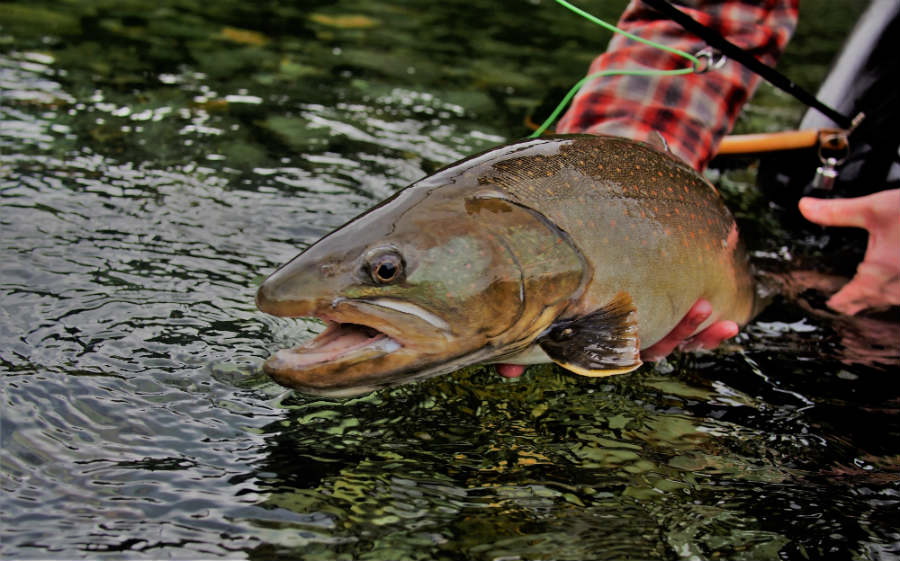 There’s a trip in every fly fishers’ life that’s just that little bit more memorable than all others. Sometimes it’s a result of the number or size of fish caught. Sometimes it’s a result of banter with your fishing buddies or down to the decent weather, while other times it’s the environment and the mood it creates. The weekend in question fused these together into one epic session of chasing multiple species of fish using one kind of fly, the ubiquitous egg pattern.

We spent our working weeks in Vancouver staring at computer screens, writing reports, and meeting with clients, but the proximity of Vancouver to the outdoors allows a range of nearby rivers and lakes to fish when the weekend arrived. Our weekend’s fishing focused on the Birkenhead River, which is about a three-hour drive inland from Vancouver and is a significant spawning tributary of the Fraser River for sockeye and chinook salmon. The river flows for approximately 40 miles through the Coast Mountains before entering the northern end of Lillooet Lake, just downstream of Pemberton. The salmon in the river travel more than 150 miles upstream from the mouth of the Fraser River via the Harrison River, Harrison Lake, the Lillooet River, and Lillooet Lake, before entering the Birkenhead. 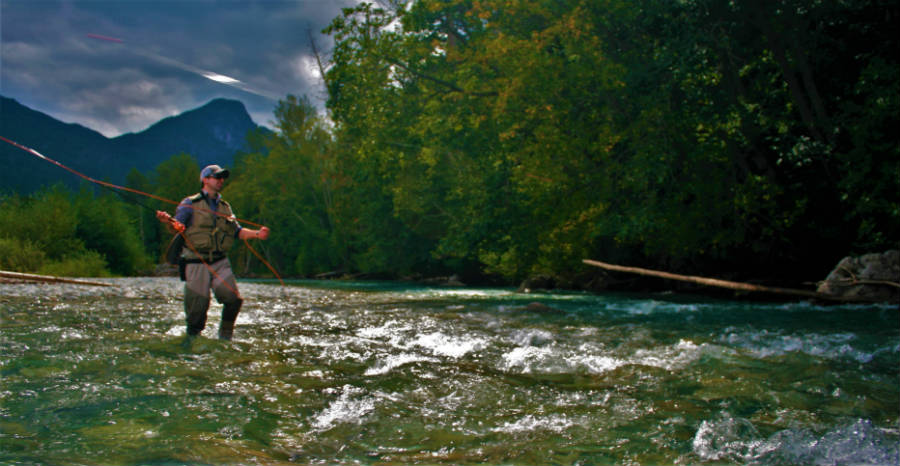 The Birkenhead River valley is glorious and wild.

The river system and campground are within the traditional territory of the Líl̓wat Nation, who have been in this region for over 5,500 years. The freshwater systems in their traditional territory are home to a variety of species, and sockeye, chinook, and coho salmon provide a significant food source for the community. The salmon also are significant in traditional spiritual and ceremonial practices. The Líl̓wat Nation have made use of the sockeye especially, through traditional harvest where the river enters Lillooet Lake.

The river also supports a range of recreational fish species, including rainbow trout, mountain whitefish, and bull trout. Rainbows, which generally range from one to two pounds, are common in the system and generally, but it’s not clear whether they existed prior to stocking programs in the area. Bull trout of about the same size are also present in good numbers, and an occasional four-pounder comes to the net. 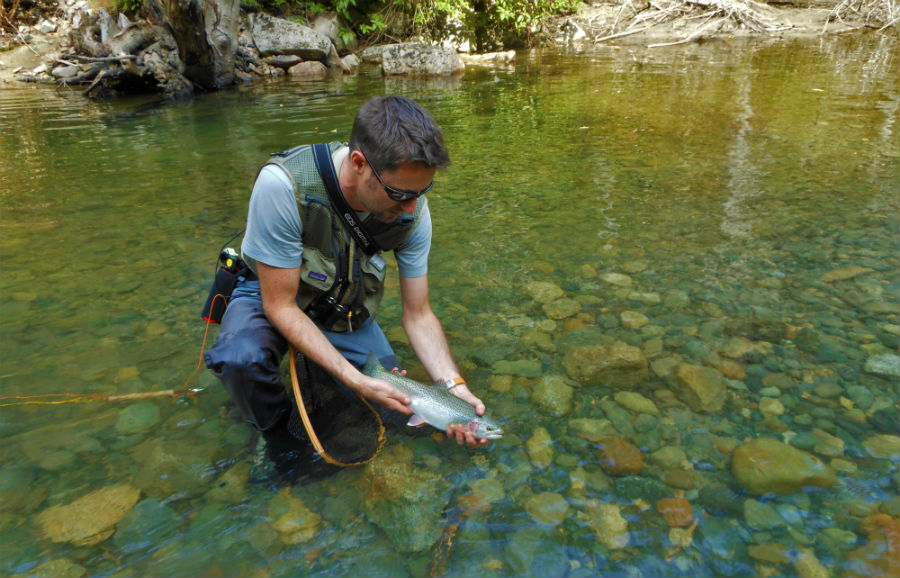 The rainbow trout were feasting on sockeye and chinook eggs.

The Birkenhead is influenced by glacial action left following retreat of the Vashon Ice sheet, about 10,000 years ago. Flows are dominated by snowmelt during freshet and the summer months, which results in lower water clarity, while the river flows are much lower during the winter and the river typically runs clear. The Birkenhead is nutrient-limited like many other Coast Mountain rivers, which results in green coloured algal growth on the rocks. However, the abundance of large woody debris, including the odd log jam, provides additional habitat and nutrient input for the resident fish. The river has the usual range of aquatic invertebrates, including mayflies, caddisflies, and stoneflies, so your typical nymphs and dry flies work here. During late August and September, however, the fly of choice is the egg pattern . . . period. Thus, with full fly boxes, we energetically left Vancouver and toward the hills for some action on the water.

It was a stunning weekend in the river valley: it was warm, windless, and the skies were clear. We had our campsite set up by 4p.m. on the Friday, so we decided to head down to a pool adjacent to the campsite for a few hours to fish before dinner. I was lucky to have first casts in the pool while Jason got his fishing kit together, and by the time he arrived about 10 minutes later, I had already landed three good-size rainbows. The following hour saw us both consistently hook into rainbows and mountain whitefish eager to take the egg patterns that we drifted through the pool. By the end of the first session, we’d landed at least a dozen rainbows each, along with a handful of whities. 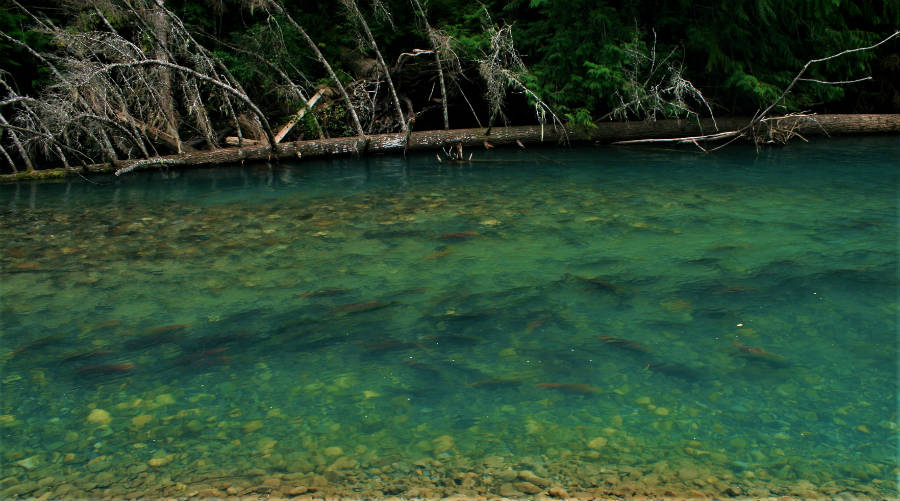 Pods of spawning sockeyes throughout the river provided ample food for trout and whitefish.

The trout were enthusiastically feeding, so hooking up was a simple matter of dead-drifting our egg patterns past an obstruction, such as a boulder or log, where the flows were concentrating the food particles and providing resting lies for the trout. We didn’t have to work hard for each strike and concluded that the size, up to three pounds, and number of fish were likely the result of resident rainbows following the salmon upstream from Lillooet Lake to feed on the salmon eggs. The stomach bulges on the rainbows surely attested to the volume of eggs they were consuming, which wasn’t surprising given the number of salmon spawning in the system.

Tom arrived the following morning, just in time to fuel up on bacon and eggs before we headed farther upstream for a day of hiking and fishing. With day packs full of food, water, and fishing kit, we walked a good distance and found sockeyes and chinooks throughout the river. It was awesome to watch the bright-red sockeyes doing their thing, especially as I’d only witnessed this remarkable event accompanied by Sir David Attenborough’s narration. We lost count of the number of rainbows we caught on Saturday, but it was especially enjoyable watching Tom, a first-time fly fisher, catch his first trout on a fly. It wasn’t the largest fish of the trip, but the grin on his face made up for it, and his first was quickly followed by a good-size second, then a third, and more. 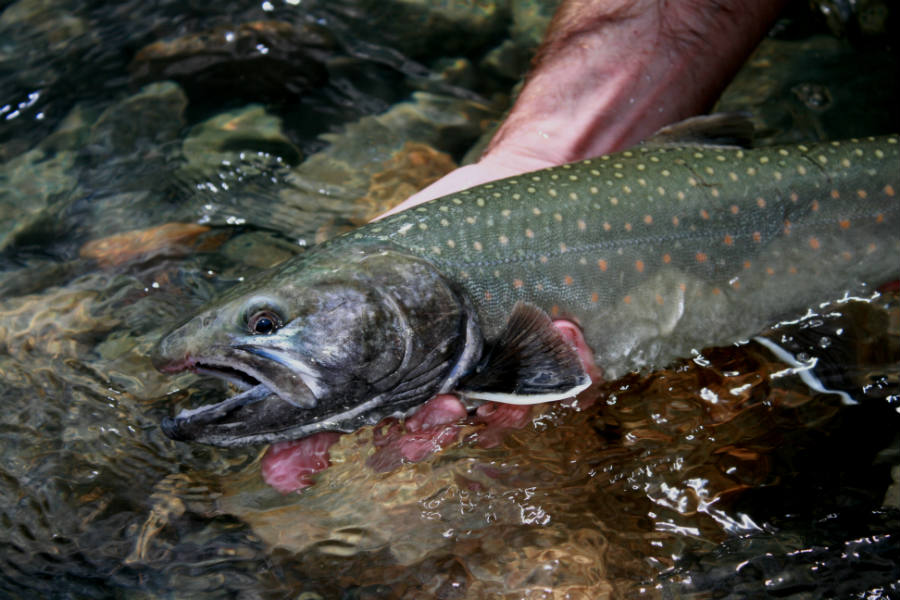 Bull trout were often holding in tailouts above deep pools.

Fishing for the Birkenhead’s sockeyes and chinooks is prohibited. However, their presence certainly turbo-charged the action for the rainbows, whitefish, and bull trout. Birkenhead chinooks are genetically unique in the wider Fraser River system, with the population returning earlier than any others. The fish are also generally larger than others in the system, which certainly showed when they would cruise from the deeper waters into the shallows. They are impressive fish, especially in the confines of a river channel, and as this river provides important spawning habitat for them, we made sure to avoid wading in the river or disturbing the redds by fishing in sections that didn’t have actively spawning salmon.

Sunday turned out to be even better, as we walked farther upstream from the section we had fished on Saturday. We found deeper pools that held a greater concentration of fish, especially large bull trout. There were more than a dozen deeply coloured bulls resting at the tail of a riffle, where it dropped into a pool and created a cushion wave against a section of bedrock. The largest of these bulls was about four pounds–they grow much bigger in other systems, of course—but their coloration, eagerness to take the fly, and stubbornness once hooked were impressive. 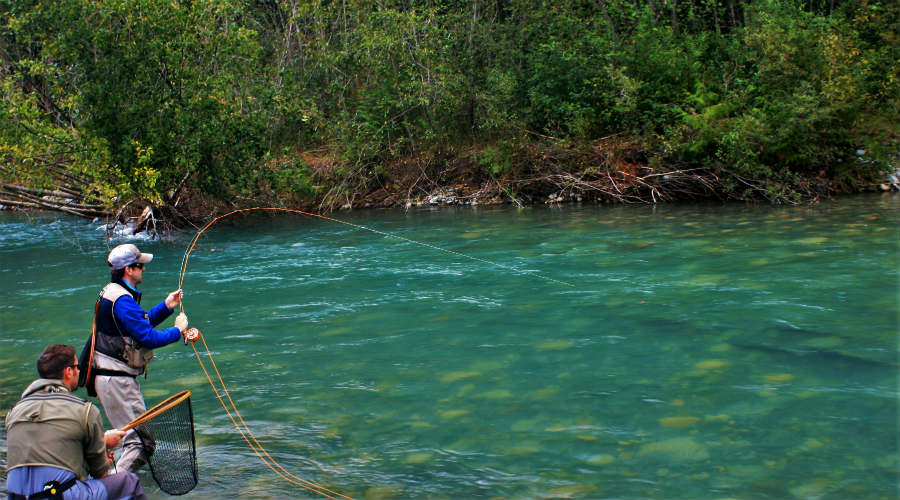 Fishing behind a pod of spawners, but not those on redds, usually produced a trout.

We had our first actual bear encounter on the river, as well. Actually, the bear was walking through the river while we sat eating lunch on a cliff overlooking it, but we still counted it as an encounter. We had already seen bear scat and prints galore, so we were happy to see this black bear from afar. Bears are common along the river corridor and although the one we saw didn’t look fully grown, it was still big enough to remind us of the importance of being bear aware. We finished off Sunday with a return to the campsite pool we’d fished on the Friday, for a final hour of action before breaking camp and heading back to Vancouver.

The weekend was over all too soon, but we’d lost count of the number we caught within the just first few hours of the trip. Everything had come together perfectly: the warm and sunny weather, the fishing buddies and the banter, the fishing action itself, and just being able to see spawning salmon doing their thing. Of course, I hope that wasn’t my best fishing trip ever, just my best fishing trip so far. 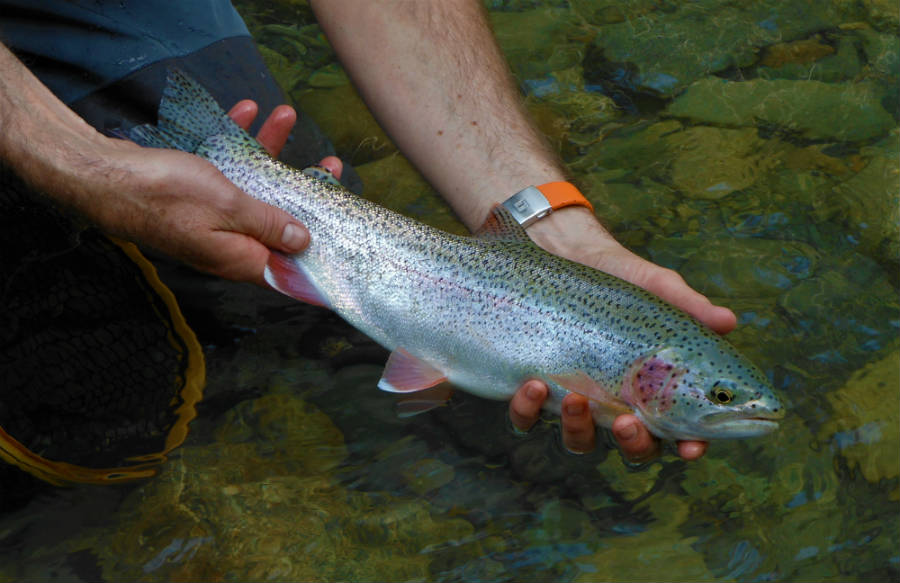 One of dozens of rainbows that came to hand over the weekend.

One thought on “Photos and Story: Bulls and Rainbows in BC”