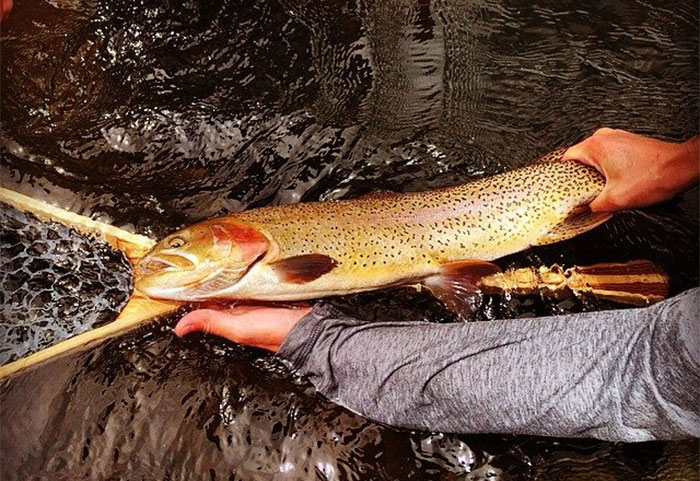 It took a lot of teamwork, but this large cutthroat finally came to the net and made the whole trip.
Photo by Charles Warren

Some team fishing—and the help of a local guide—got us a lot farther than we ever expected on a recent fishing trip in Colorado. We had planned on heading to the North Platte by we changed our plans when we heard that the fishing was really heating up on the Fryingpan River in Basalt, near Aspen.

Five of us camped near the dam and spent a week casting, losing, and re-purchasing a series of green-drake patterns. Luckily, we were mostly losing the big dry flies in the mouths of large trout. Although the true green-drake hatch was still about a week away, the trout seemed to know that it was immanent, and they were looking to get an early taste of the delectable mayflies.

Incredibly, one of the members of our camping crew ran into a friend from Alabama, Johnston Stakely, on the river. Johnston guides at the Roaring Fork Club, so he had the advantage of local knowledge. He fished with us each evening after work, and he introduced us to a stellar Green Drake many of these large, wild fish sipped so naturally it made the hair on your skin stand up. 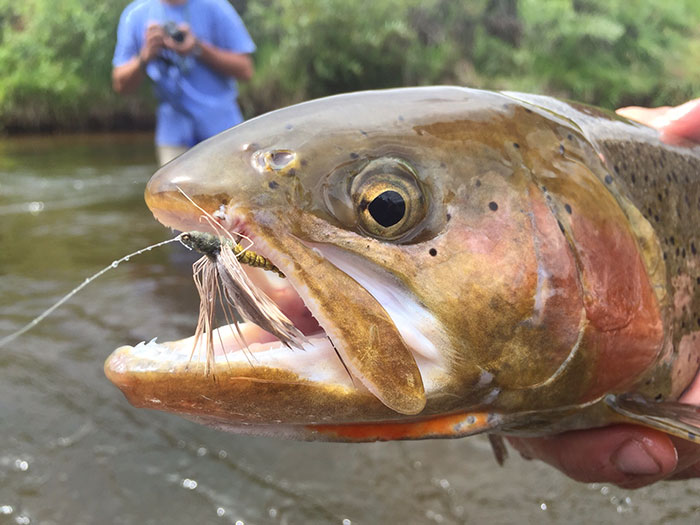 Although the hatch wasn’t on yet, the trout ate Green Drakes with abandon.
Photo by Charles Warren

On our last full day together, one of our group members, Will Phelps, found himself in a real pickle: On the opposite side of the river, a huge trout was breaking the surface in soft water every three minutes. Will changed flies six times but could not induce a strike. Johnson was determined to net this beautiful fish, so we set up as a team, with two spotters, an angler, a netter, and a photographer.

I was standing from the back of a truck and watching the scene when, after about 25 minutes of trying to get just the right presentation and fly combination, Will dropped the drake about four feet from the fish’s nose. The fish glided to the top, its back breaking the surface as the trout rolled over the fly, and Will set the hook. A roar erupted from our section of the river—one of those mental snapshots of a quintessential fly-fishing moment. We left the 20-plus-inch fish in the water, as we retrieved the fly and took our pictures.

Charles Warren guides at the C Lazy U Ranch in Granby, Colorado.