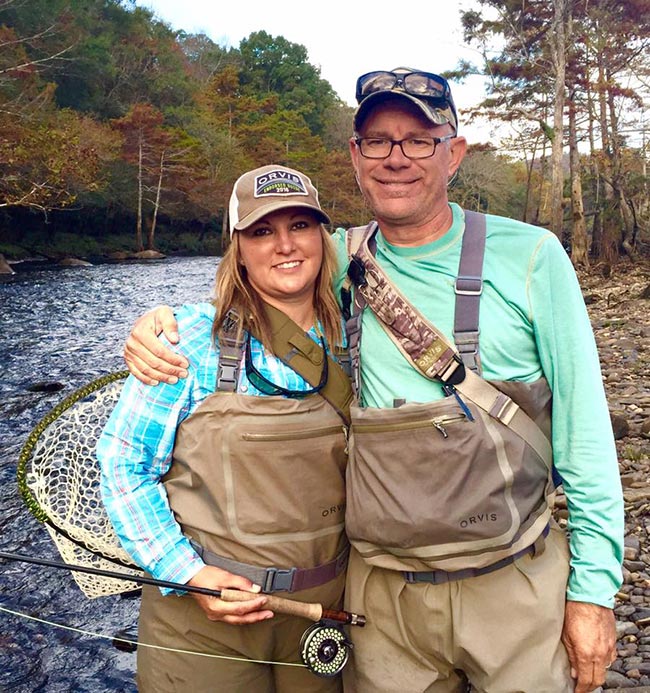 Jenny and Rob spend most days guiding other anglers, but they get an occasional few hours on the water together.
Photos by Rob and Jenny Woodruff

For two married Orvis-endorsed fly-fishing guides, especially two who operate separate guide services, days off rarely line up together. Even rarer are days off with good weather and water conditions. Yesterday was one of those rarest of days for my wife, Jenny Mayrell-Woodruff, and me so we were out early on our home river, Oklahoma’s Lower Mountain Fork. While Rodgers & Hammerstein may have indelibly stamped the state as a place “where the wind comes sweeping down the plain,” southeastern Oklahoma is a land of rocky cypress-lined streams, rugged forested mountains, and misty valleys. Fed by the coldwater releases from Broken Bow Dam, approximately 11 miles of the Lower Mountain Fork River supports rainbow and brown trout year-round. 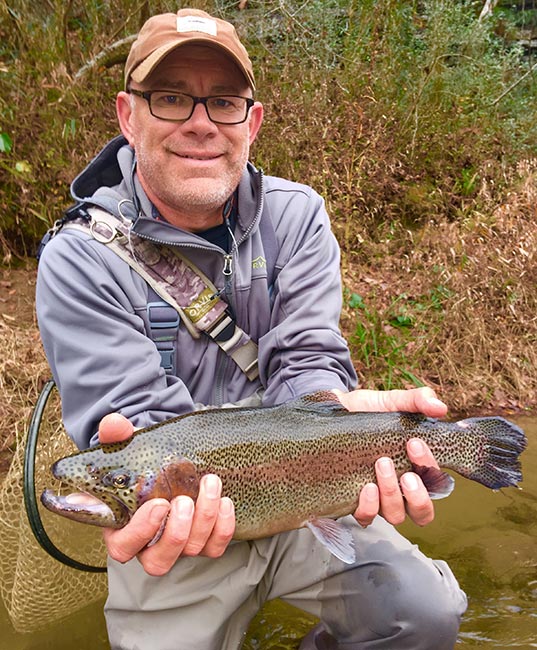 Rob hooked this nice bow on a Hare’s Ear Nymph.

The day began cool and cloudy with a light drizzle, perfect conditions for spotting some of the big trout that live in the river. I spied one first and got in position to make a good presentation. Several drifts and one fly change later, I saw the big trout move slightly to the right and a small flash of white as he took the size 18 Hare’s Ear Nymph. I set the hook, told Jenny “Big fish,” and began to make my way downstream as the 20-plus-inch ‘bow jumped and began to shake its head violently. Jenny scrambled down a steep bank below the fight and got the net ready. Once the trout began to tire, she closed the distance and scooped it up. A few quick pictures, some time spent making sure the fish was revived and ready to be released, and it was Jenny’s turn to take a shot. 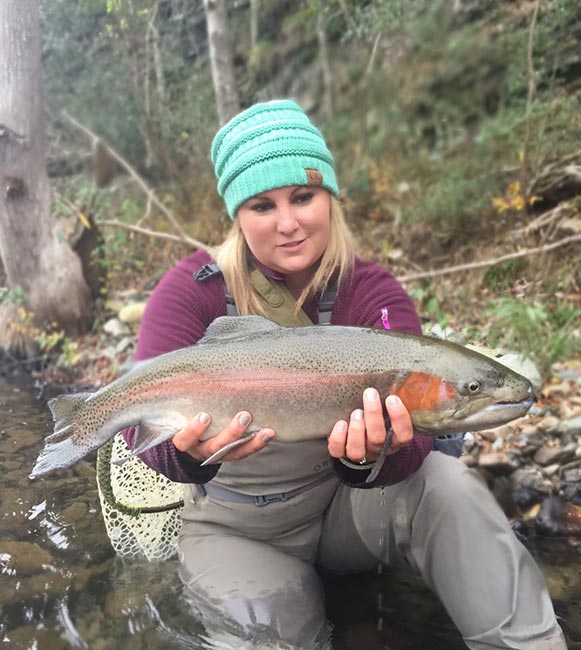 After many fly chances, Jenny tricked this beast with a Pat’s Rubber Legs.

After almost an hour of walking the river and peering into every likely place, Jenny spotted an even bigger trout holding downstream of a large rock. The hooked jaw and red cheeks of a mature male rainbow were visible even from a distance. Multiple good drifts and multiple fly changes did not produce any reaction from the fish. Digging deeper in the fly box, Jenny tied on a black Pat’s Rubber Legs and made a cast. The trout grabbed the fly on the first pass, and now it was my turn to be in charge of the net. Jenny worked the big fish to an area of slightly calmer water. The first netting attempt made the fish rocket back upstream, and I moved up slightly to follow it As soon it came back in reach I was able to get it in the net and headed for the bank, making sure it stayed wet the entire way. We quickly snapped a few photos, held the fish in the current until it was ready to go, and decided it was time to go warm up and grab something to eat.

5 thoughts on “Photos: A Guide-Couple’s Day on the River”