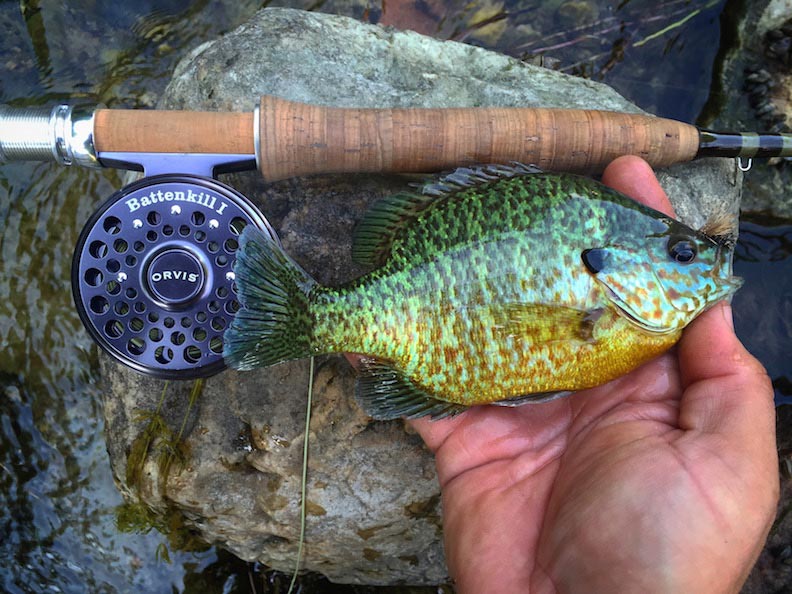 Catching pumpkinseeds on a glass rod is a lot of fun.
Photo by Tyler Coleman

We have recently relocated to Michigan from Arizona. (You may remember our wild-trout series over the summer.) With an overwhelming amount of water around us, I started off by fishing what was most convenient: our backyard. We currently live on the Clinton River, which is home to a wide variety of fish and 83 miles of fishable water, so I plan to explore it as much as possible. The weather has been fairly inconsistent–one day featuring sun and heat while the next a short down pour causing a drop in water temp and almost zero visibility. 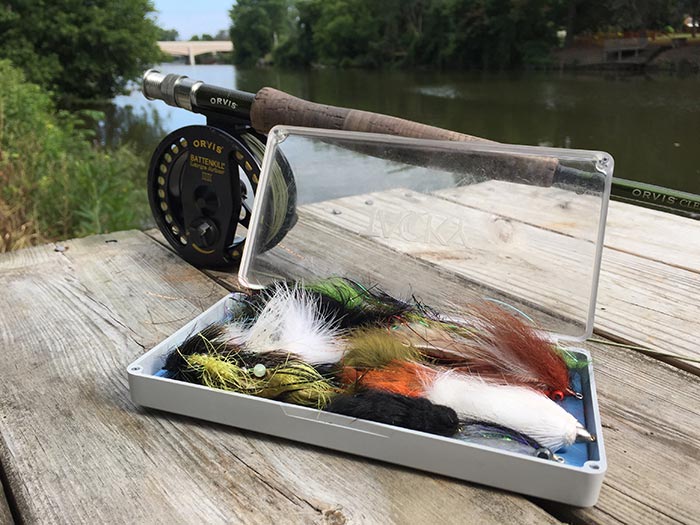 My streamer box gets a lot of work on the Clinton River.
Photo by Tyler Coleman

At one point, the water was flowing from the storm drains so intensely that it knocked down full-size trees overhanging the river. It’s tough to figure out new water when there is no stability, but it keeps me entertained to try new flies and techniques and to sharpen my skills. Every day, I try to learn something new about the water or fish behavior in this environment, and it seems that I do. There isn’t a day that goes by that my wife couldn’t look out the window and see me walking the yard trying to get a better understanding of the water. 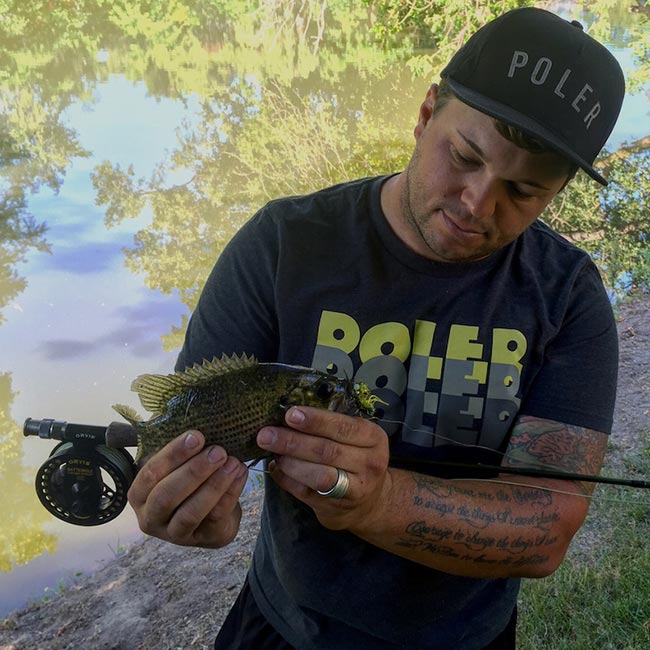 These little rock bass will pretty much eat any fly you put in front of them.
Photo by Anastasia Coleman

This river never ceases to surprise me. One morning it’s all largemouths out back so I fish with those as a target. The next day I go out with the same fish in mind, and a species I have never seen before comes out of the same spot and nails my streamer. After an awesome fight on my 5-weight Clearwater and a few quick photos of the catch, I had to hop on my phone and figure out what the fish was: a bowfin. 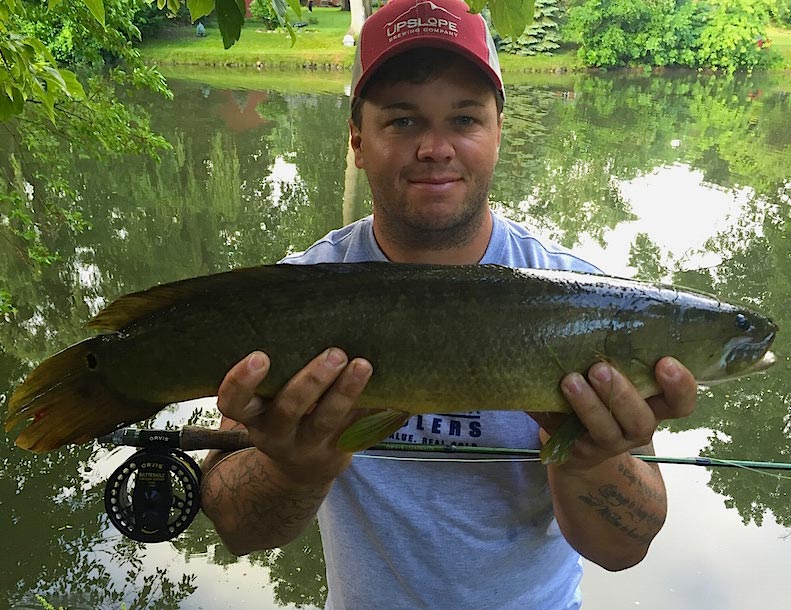 I had never seen a bowfin before I caught this bad boy.
Photo by Anastasia Coleman

On a different day, I was going casting for a big bass that was hanging out under a tree a few days before. I threw my sculpin a little past where I had seen the fish holding, and immediately there was a splash. Faster then I could even process what was going, on something ran across the river, taking me to the backing. I hoped that an even bigger bowfin was on the line but after some battling I was shocked to see a nice size common carp. These fish have been one of my favorite to catch since I first picked up a fly rod, and to catch one in a new environment was a treat. I heard a joke recently saying warm water fishing is like a box of chocolates, because you never know what you are going to get. This river has continued to prove that to be true, and I feel the excitement of a variety of possible species is what keeps me going back for more. 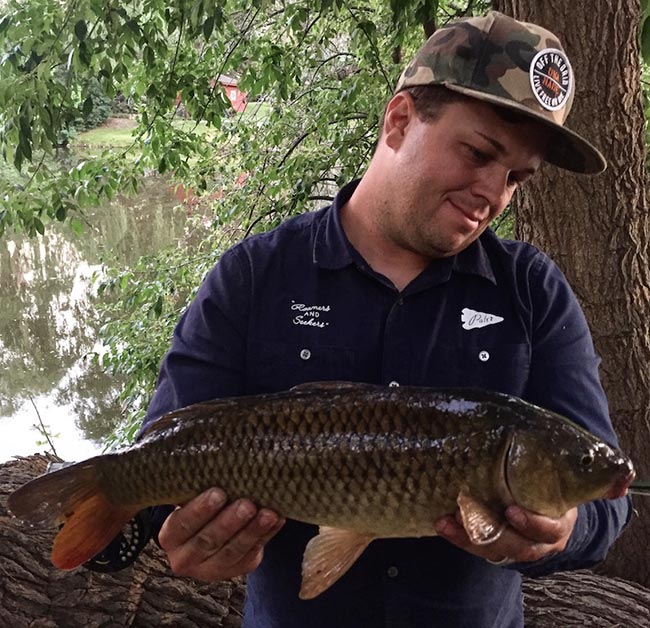 Carp are among my favorite species, so this was a pleasant surprise.
Photo by Anastasia Coleman

The main branch of the Clinton River flows has many tributaries that contain both warmwater and coldwater species. The river even has a steelhead run in the spring. The more we explore the river, the more species we discover. In some of the tributaries, I have seen carp, smaller pike, rock bass, largemouth bass, small gar, and a variety of crappies. Before moving to Michigan, I purchased an old Coleman canoe from a friend and have been using that to travel the areas of the river you can not get to from the shore. 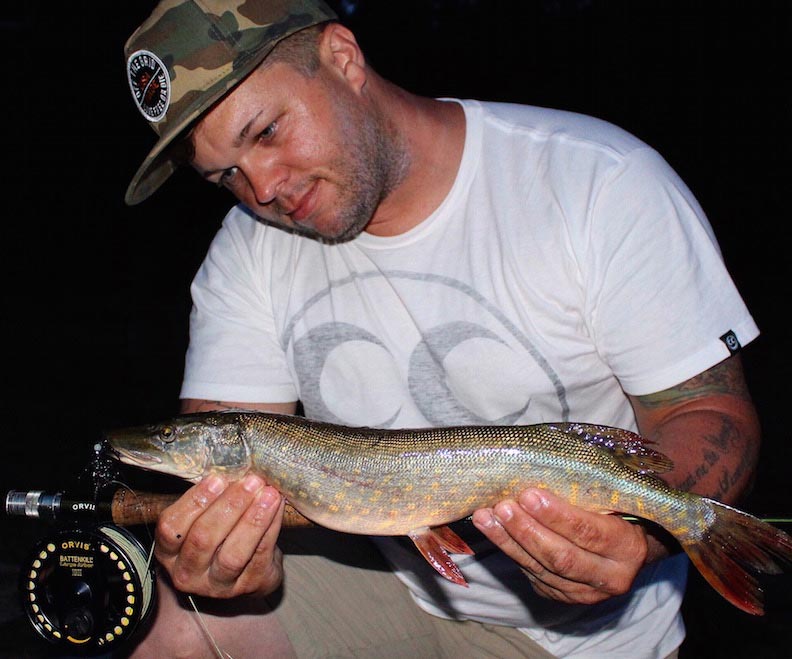 This little pike turned around to chase a streamer right at sunset.
Photo by Raphael McGeorge

Fly fishing can sometimes be pretty tough, but mix in unstable banks, no ability to wade, and dodgy water quality, and you have some challenging fishing ahead of you. Fishing the river in our backyard has been a little easier, thanks to my garage-sale-special long handled salmon net. Getting the fish in the net is usually the end goal for most people, but insuring the fish is safe and released in a timely manner is even more important. In our yard, we use that net to keep the fish in the water until we are ready to take the picture and then to place the fish back into the water, revive and release. It’s not common for me to have fish out long enough to need much revival especially for hardy warmwater species, but I always want to make sure they live on to fight another day.

Tyler Coleman recently moved from Arizona to Michigan. Check him out on Instagram: @thecolemancollection. He is a frequent contributor to this blog. 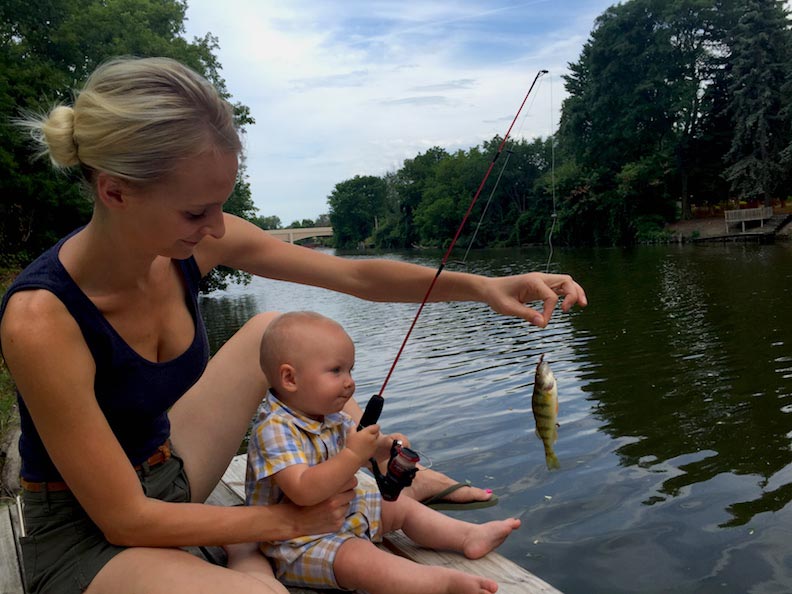 Having a river right out back makes is easy to get the kids involved.
Photo by Tyler Coleman 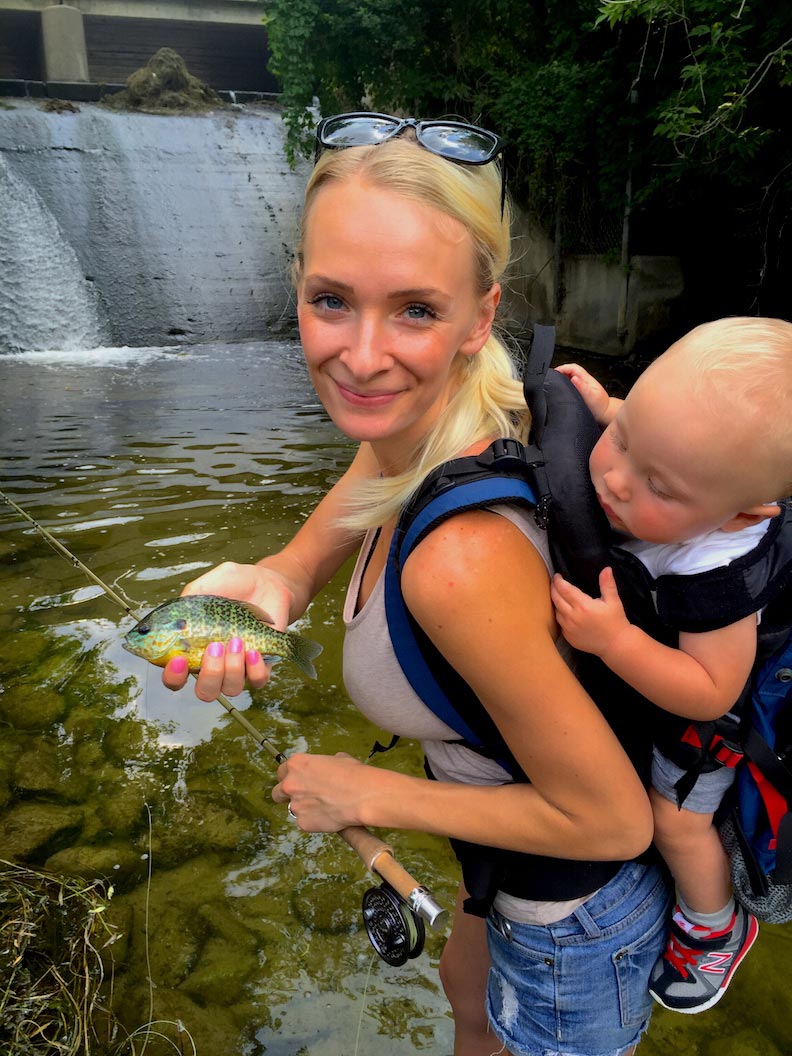 Even panfish are a blast on a glass 3wt. Anastasia wet wading in one of the Clinton River tributaries.
Photo by Tyler Coleman 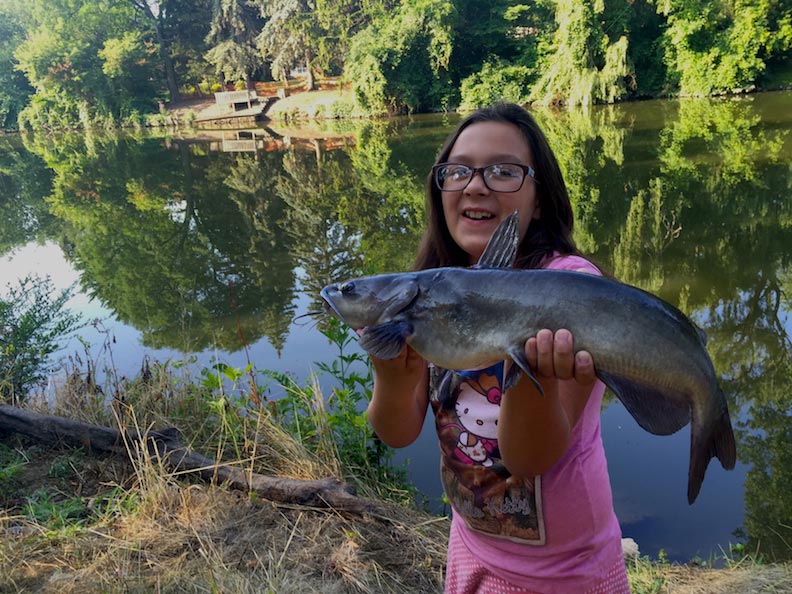 My daughter Devyn almost hyperventilated when she realized what she had caught.
Photo by Tyler Coleman

8 thoughts on “Photos: Discovering All a New Home State Has to Offer”