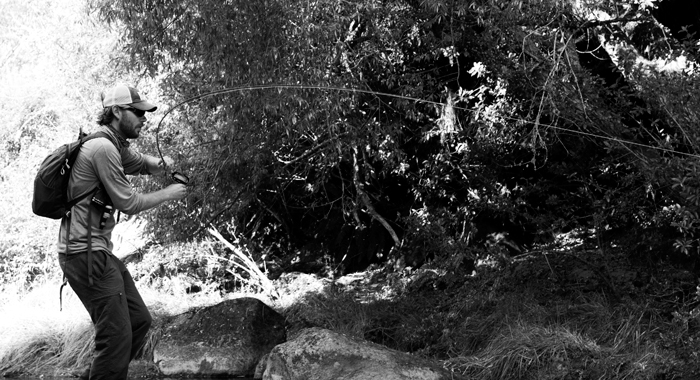 We had been fishing hard for the past month, waking up early and getting home late. We spent the days staring into flowing water praying we would see some type of movement that was clearly different from a ripple over a rock, or weeds flowing like a fish’s tail under the water. We looked so hard into the water that, by bedtime, we would close our eyes and see fish dodging left and right in the river. It was all coming to an end, at least for the two of us together. Chris was leaving for Bangkok in a couple days and I needed to sell the car before my departure in less than two weeks.

One last time, the alarm buzzed, this time at 5:15 a.m., instead of 6, because we had to beat the rain. I pretended I didn’t hear it, as I did every morning; even though the fish were worth it, at that hour, I always wanted to sleep more. “Hannah,” Chris said after fifteen extra minutes. That’s all he needed to say, and I knew it was that time, time to get up and motivate because we had some work to do.

We stopped at the gas station for a breakfast of mince-and-cheese pies and picked up some peanuts for lunch. Onward to the river: it was time to catch some trout! Please let us catch some trout today, I thought as we pulled into the parking spot.

I hadn’t caught a fish in a couple days. Days before, I had been casting to rising trout without an ounce of luck. They would be feeding in that very one spot, and then after fifteen minutes, change their pattern and decide to swim downstream right up to my legs, pretend they didn’t see me, and then after one more sip scurry off to take cover. Another frustration was something that happened to us all too often. We can both cast, usually quite well, but put a big riser or a “mini shark” of a feeding fish in front of us, and the performance anxiety sets right it. We were slapping our lines on the water, stuck in a tree, casting nowhere near the fish, you name it. We were unable to deliver any type of drift. I thought Mother Nature was cursing us. 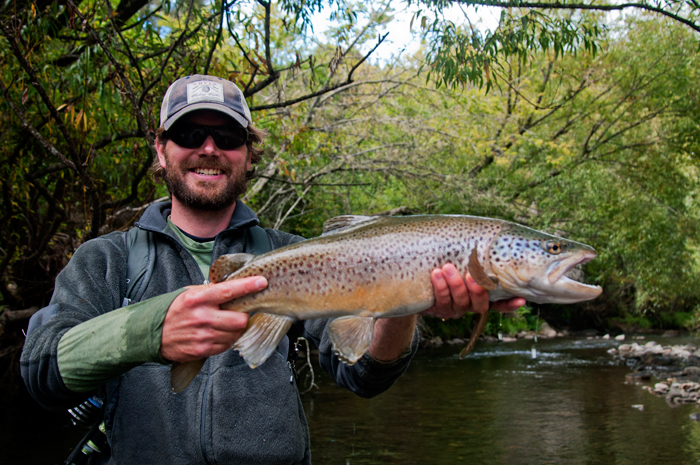 Catching this fish was not easy and required the use of two fly rods.
Photo by Hannah Perkins

“Let’s do this!” Chris said, as he did every time we shut the car door to set out for an adventure. Thank goodness for his enthusiasm because it was the only thing that was going to keep me going this morning.

We walked up onto a trout we had seen rising in the same spot days before–one that I had previously cast to, but my “mess-ups” had ruined my chance of catching it. I told Chris to have at it; it was his turn to cast in this awful spot. Chris began his mission. It was a hard place to cast, especially left handed, with trees behind him, to the left and right, hanging over him and over the fish. Here comes the performance anxiety. After many attempts, Chris’s fly was stuck in a tree. Sigh, I watched him sit back and lower his head. I had an idea; I pulled the stuck rod to the side, as he tried again with the other. This is when I said a prayer to mother nature:

“Please let this fish eat his fly, please don’t let this be a phantom trout for us.”

It wasn’t long, and I watched that fish rise one last time, this time for Chris’ Willow Grub. “Yes!” I said with such relief and excitement. I watched Chris’ smile widen across his face. We netted the beautiful brown and took some pictures. Chris’s smile was so pure: he wasn’t just smiling for a photo, and it was a smile that wouldn’t be easily wiped off his face. I think it was a fish that made both of our days, but the day wasn’t over yet.

Walking farther upriver, it was my turn. All I wanted was to catch one, so, so, so, so badly. Once again, we walked upon a riser that I had cast to days before, one that I spooked after getting my line caught in this obnoxious overhanging branch. I hated that branch. I actually hated all trees at this point. I stepped down into the water to try and get the right angle. It was after a million casts into the tree and too far to the right that I watched the fish swim down and see me, spooked again.

“There goes that; he saw me,” I said with bitter frustration.

I needed a snack. We sat down on the bank and watched the water drift by as I thought about how defeated I felt. After almost the entire bag of chips was gone, all of the sudden, there he was, swimming back to his spot. “Watch him start rising,” said Chris  And then he did; he actually started rising again! A second chance, I couldn’t screw this up. I told myself to breathe, slow down, be calm, and keep my line low. Somehow, I threw a decent cast, and he ate. He ate! I set the hook and heard Chris hoot in the background. Oh, I was so happy. This fish made my entire trip.

“He was worth the wait,” I said as Chris brought the net over to me to show me this glamorous trout. 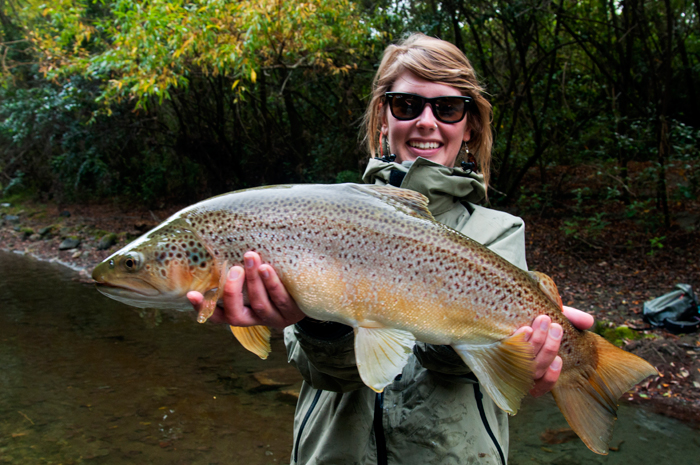 New Zealand fishing is no easy feat. I am proud of us for all that we learned, whether it was through talking to other fishermen or from trial and error. I have never fished so hard in my life for so many days at a time. Thank you to everyone who gave us suggestions and sent us in the right direction. Mostly, thank you to Chris for putting up with me in low moments and for sharing and celebrating the highs. I couldn’t have asked for a better travel and fishing buddy.

Hannah Perkins recently graduated from the University of Montana.

6 thoughts on “Photos: Hard Work Pays Off in New Zealand”