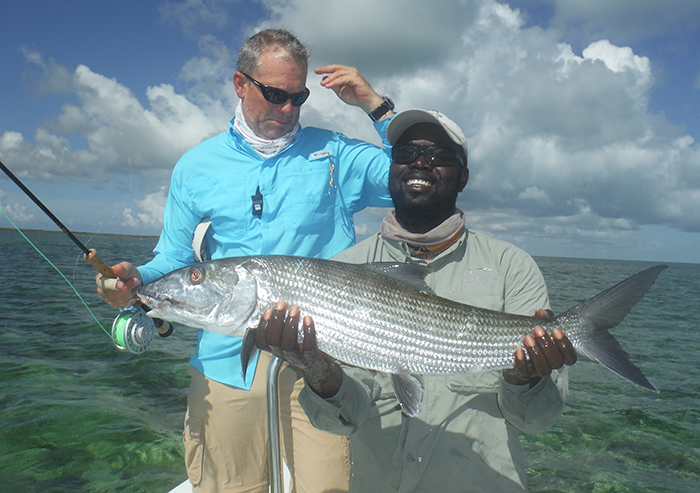 Deep Water Cay, located on Grand Bahama Island, was founded in 1959 by Gil Drake, Sr. and  Field & Stream editor A.J. McClane, so you can imagine that the biggest names in saltwater fly fishing have plied those flats over the decades.

Until this month, the record for the biggest bonefish caught at the club as 14.48 pounds, which is a pretty huge bonefish. (The world-record fish, a 16-pounder, was caught off Bimini in 1971.) That’s what makes Rory Mackay’s recent accomplishment so impressive. The angler, from Houston, tells the story of catching his record-breaking 15.44-pound bone:

Meko Glinton was guiding us. The first fish we saw for the day was a group of large bones about eight in total at around 9:15 am. They were right up against the mangroves but fortunately on a falling tide. We were within 50 feet of them.

I made two casts towards them that did not attract any attention.

The third cast I made was at the two largest fish coming toward us. I began stripping the fly, but neither of the two bones moved towards the fly.

Suddenly, a fish that I had not seen came in from the right and took the fly. To me, it looked like a smaller fish had taken the fly.

Meko had seen the entire fish from the side on as it took the fly. “That fish is special,” he said. “We need to get the boat back and try not to let him get to the mangrove cut.”

The fish peeled line off the reel at a prodigious rate I had not seen from a bone before; I was into the backing and that was shrinking fast. It was a while before I could recover any line. It took a good 15 to 20 minutes to bring the fish in, with a number of blistering runs.

After we had boated the fish we, thought that the two I had cast to were probably bigger, and generally agreed that the whole group of fish were large.

Anyone who has spent time on the flats knows what an astonishing story that is. How often do you catch a bonefish that you don’t see first. . .and then it turns out to be a record?! Congratulations all around are in order.