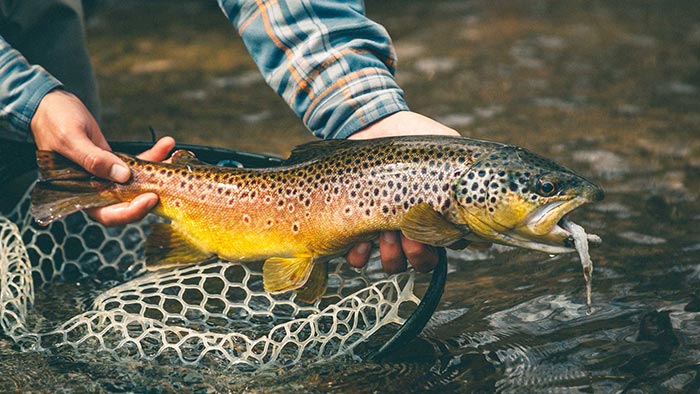 This savage brown ate a streamer, even though its last meal had not yet been digested.
Photos by Drew Nisbet, Orvis Buffalo

As winter releases its icy grip on the Northeast in late March and into April, many anglers look forward to warm spring days of fishing to rising trout on their favorite tailwater or freestone stream. Focused on these days of fun in the sun and easily targeted bug-sippers, we sometimes overlook what is often the best opportunity of the year to catch the biggest trout in the stream. 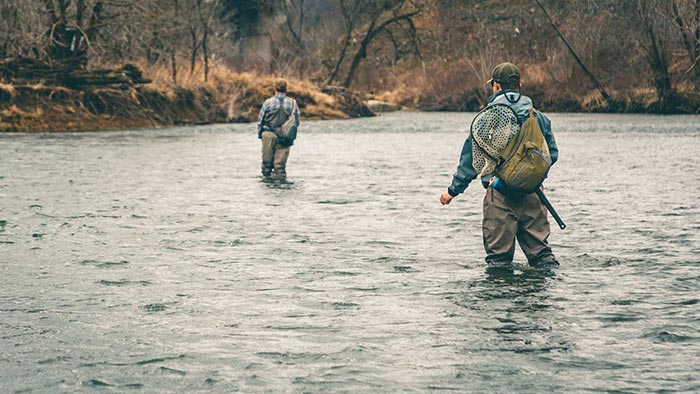 Nick and Mike like to move fast and cover a lot of water, when they’re chucking big streamers.

One of the best ways to entice these alpha trout is to offer them a large meal. These mature meat eaters have survived and obtained their impressive size by being killers. Large, articulated streamers swung and stripped is the name of the game when head hunting for these early spring beasts.

Last week, I met up with friend Nick Sagnibene of Adventure Bound on the Fly–an Orvis-endorsed guide service based in Ellicottville, New York–where we were joined by our friend Mike Ilecki to explore several tributaries of the Allegheny River open to year-round catch-and-release trout fishing. Nick and Mike are two of the more fanatical streamer junkies I’ve ever met. One look at their Instagram accounts (@nickysagz and @examplebnm) will give you a first-hand glimpse into their meat-slinging, run-and-gun fishing style and the huge inland trout they regularly encounter. 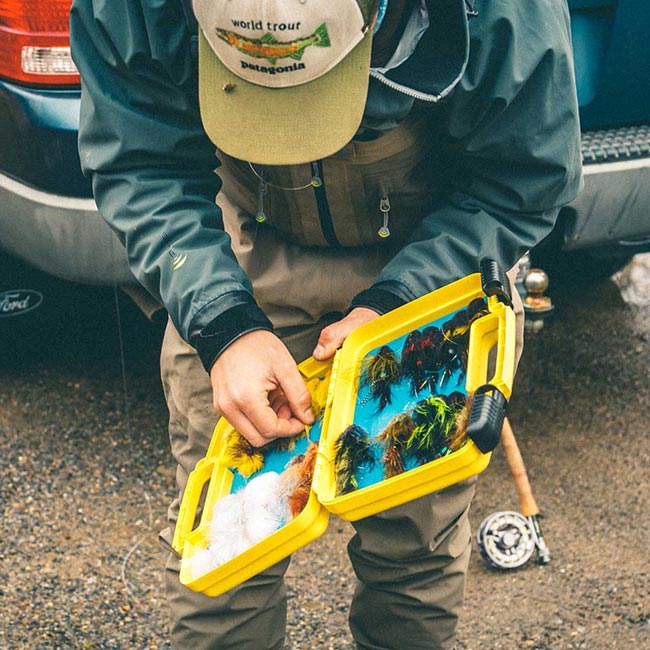 Nick chooses a yellow articulated pattern, which turned out to be a good decision.

I am the first to admit that fishing with large streamers is not something that I do very often, and I jump at the opportunity to fish with Nick and Mike not just because they are great guys, but because they force me to leave my comfort zone of European nymphing techniques and teach me a great deal about capitalizing on the predatory instincts of big trout.

As we made our way down the first section of stream, I was caught off guard by how fast they work the water. One or two targeted, downstream-and-across casts per run was all they needed. At one point, I shouted down to Nick, “How fast should I be stripping this fly?” Nick’s response was, “Just get it movin’, man,” and move we did! We staggered ourselves about 30 yards apart as we worked the water with a deliberate speed, maintaining our steady walk-and-cast cadence and taking turns at the head of the pack. After about an hour of covering water without a tug or follow, Nick made the decision to hit another stream. We exited the river corridor and used a set of abandoned train tracks to make our way back to the vehicle. 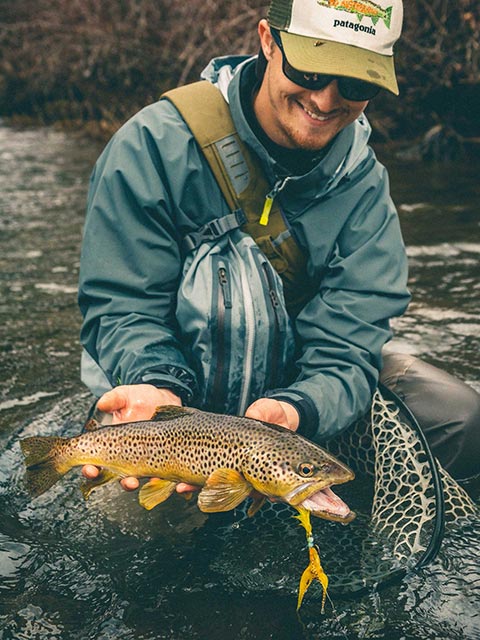 The first fish of the day came on the first cast in a new spot.

Heading farther south, we stopped at a small town with homes built along the hillsides and large industrial factories spanning the valley floor, where one of the Allegheny River’s largest tributaries feeds these factories with cold water. We exited the SUV, and I saw that Nick was changing streamers. I took this opportunity to ask him what his favorite color and pattern is. While holding the fly he was removing from his line in his mouth, Nick mumbled, “Love me some yella” and took a large yellow articulated fly–composed mostly of zonker strip, rubber legs, and weighted eyes–from his streamer box.

Nick prefers to fish these large streamers with a 10-foot super-fast-sinking Polyleader. A great tool to turn over these heavy sinking leaders and large weighted flies is a 9-foot 6-weight rod with a fighting butt. An excellent alternative for larger waters is an 11-foot, 6-weight switch rod. 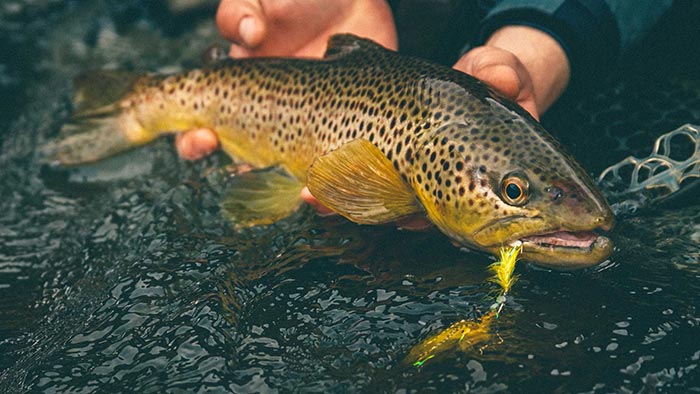 You won’t catch huge numbers with this method, but you have a chance to catch some real beauties.

We entered the river on this new piece of water at the abutment of a large bridge. On the downstream side, a deep, fast run stretched for nearly 75 yards. Nick placed his first cast across the head of the run, and just as it began to sweep downstream, a large brown intercepted streamer and immediately porpoised, exposing its size and beautiful buttery yellow sides. Using 12- to 16-pound-test fluorocarbon is essential to keep these larger fish from breaking the tippet on the initial strike and allows the angler to quickly and efficiently bring the fish to the net in higher flows.

After a quick photo, the fish was on its way, and we repeated our fast downstream advance for almost a mile of river before Mike got an eat and was able to land another beautiful mature trout. As we removed him from the net, we discovered the fish’s previous meal, a half digested sculpin, hanging out of his mouth–further reinforcing that these larger mature trout are indeed alpha predators.

Drew Nisbet is the Orvis Fly Fishing and Wingshooting Community Leader. Check out his Instagram account for more great photos.

One thought on “Classic Story and Photos: The Meat Mongers of Spring”