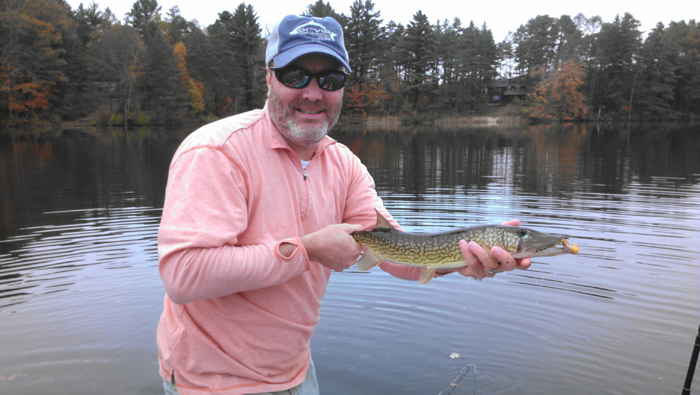 The first pickerel I landed slammed the Kinky Muddler during a fast retrieve.
All photos by Beau Thebault

Last week, I was dropping my kids off at school, when I passed a pickup truck with two stand-up paddleboards and a bunch of fly rods in the back. I was intrigued enough that, when I got back to the office, I started asking around to see if anyone knew the guy. My friend Andrew said, “I think I’m facebook friends with that guy,” and a few minutes later, I was perusing the site of Vermont Paddleboard Outfittters. I emailed Beau Thebault, the man behind VTPO, and we arranged to fish a small, shallow lake just 15 minutes from Orvis HQ, which holds some nice pickerel.

I’d never been on a paddleboard, although we’ve published plenty of videos and photos of fly fishers using them in the salt. But I could immediately understand how such a watercraft would have advantages over a canoe, which is what I usually fish from on still water. 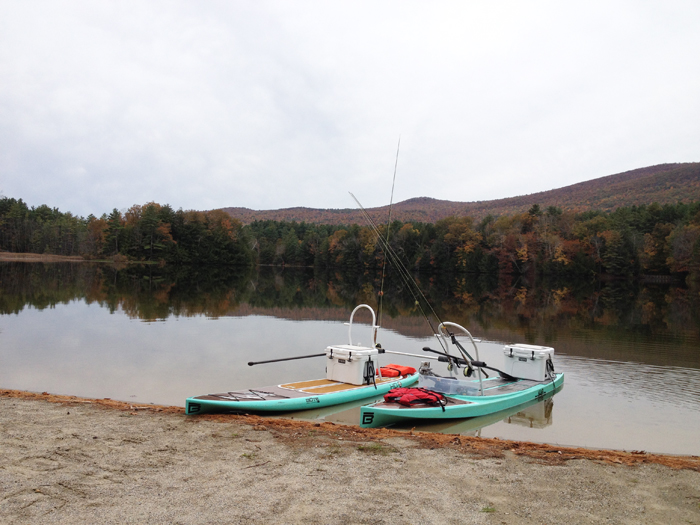 Beau’s set-up is ingenious and is perfect for poling the warmwater flats.

Yesterday was cool and cloudy, and when I met Beau at the lake, he already had his system rigged. His set-up is two SUPs, each rigged with a Yeti cooler and a brace, connected by a bar. Beau stands on one and poles or paddles, and the angler sits or stands on the other. The board was way more stable than I had anticipated, and it was easy to stand and cast. After awhile, it seemed just as comfortable as the bow of a flats boat.

Beau was a little bummed that we didn’t have a sunny day because he loves to sight-fish. “It’s really no different from fishing the tropical flats,” he said. “You spot a big bass or pickerel and then have to make a good presentation, or it spooks.” 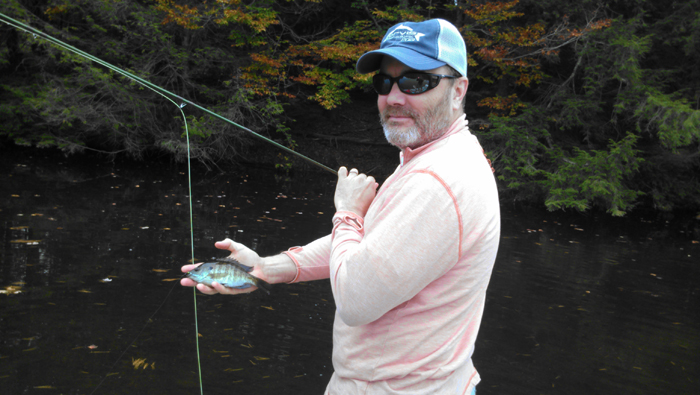 Plenty of bluegills fell for the dragonfly nymph.

As we poled to our first spot, something rose in front of us. Beau handed me a 4-weight rod with a little dragonfly-nymph pattern on it, and my first cast produced a bluegill. It was good to get the skunk off right away, so we could chase the toothy critters. We didn’t find the pickerel in spots where they’d been just a week earlier, so we had to start working around the lake.

I landed a couple more bluegills, and then made a cast to a submerged log under some overhanging pine boughs. Something hit the fly hard and then started splashing on the surface. I assumed we’d found the pickerel, but when the fish took to the air, we saw it was actually a pretty nice rainbow trout. They are all stockers in the lake, but it was a pretty good fish, anyway. What the heck it was doing in that spot remains a mystery. 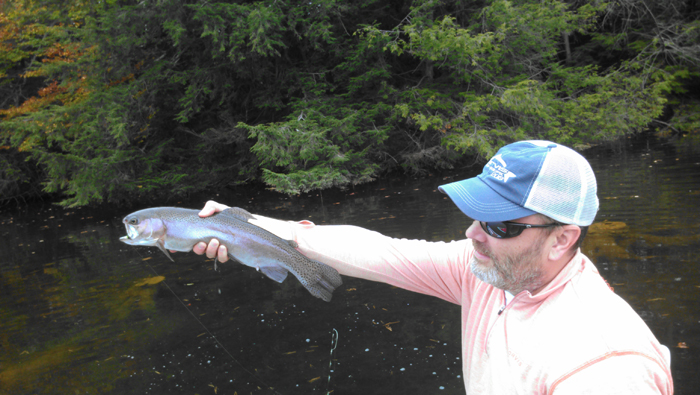 This was a surprise: a big rainbow living in shallow, debris-strewn water along the edge.

We continued to work around the lake, catching more bluegills and perch and once we spooked what must have been a monster pickerel, based on the amount of water it moved. As a last resort, Beau said, “Let’s work the deeper water, where they might be hanging out because of the low pressure.”

He handed me an 8-weight rigged with a tan-and-white Kinky Muddler and told me to make long casts followed by a two-handed retrieve. About five cats in, a big pickerel took a swing at the fly and missed. Suddenly, my casting got better and my concentration improved, and it wasn’t long before another fish smashed the fly and stayed stuck. It was a very nice pickerel, which fought pretty hard before coming to hand. Over the next 45 minutes, I landed two more pickerel and had strikes from at least a half dozen more. One fish missed the fly, then hit it, then spit it, then came back and ate the fly right in front of us, while I was bemoaning the miss. I was a killer afternoon. 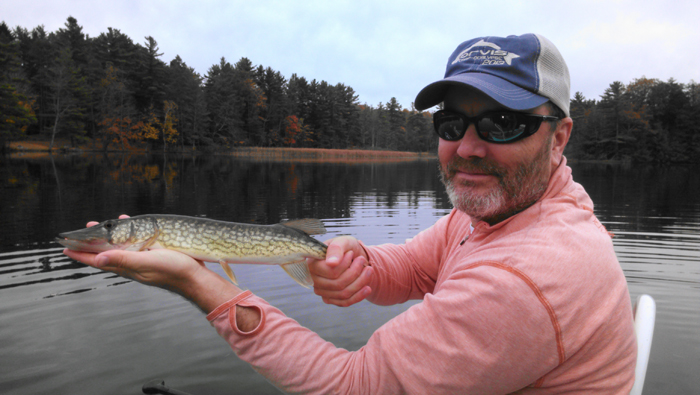 The pickerel were hitting the fly but without their customary “kill everything” aggression.

I am totally sold on the SUP concept now. It makes for an excellent fly-fishing platform, keeps you high above the water, and is easy to put in and take out. Beau just started guiding from the boards in July, and he’s worked out most of the kinks. He’s pumped up for next year, when he’ll have a whole season to work with. I think he’s hit on something that will open up more fishing opportunities in the region. We found a school of perch and landed four fish on consecutive casts.

The two-board set-up offers many of the benefits of a flats boat.
Photo via Vermont Paddleboard Outfittters

5 thoughts on “Photos of the Day: Flats-Fishing for Pickerel and More on a Vermont Lake”