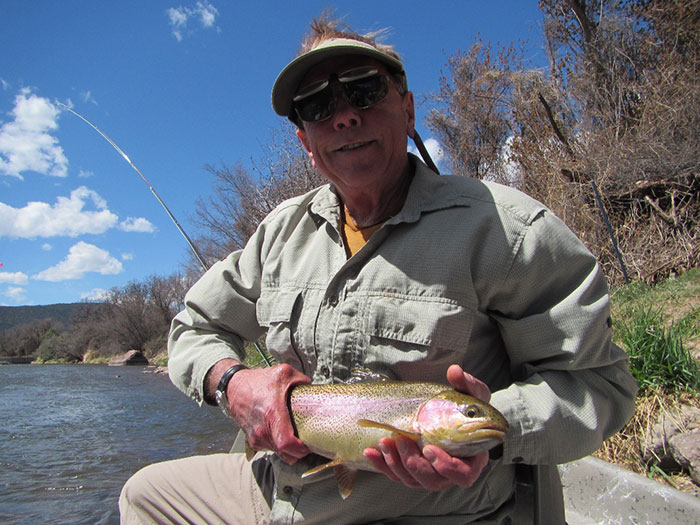 As we transition from the winter to summer season at the ranch, the guide team has had the opportunity to do some fishing on our own—exploring rivers in Colorado, branching out to new waters in Montana, and becoming reacquainted with our local Blue Ribbon Trout Streams. I love fly fishing because of all the beautiful places the sport can take you and the great people that it can connect you with. I, and the rest of the team, have been reminded of these things over the last couple of weeks.

I had the chance to fish the Roaring Fork and Colorado Rivers near Glenwood Springs, Colorado, recently. Not only was I able to fish the rivers where I started learning the sport, but I was also able to fish with two of my mentors in fly fishing: my Dad and his friend Steve. 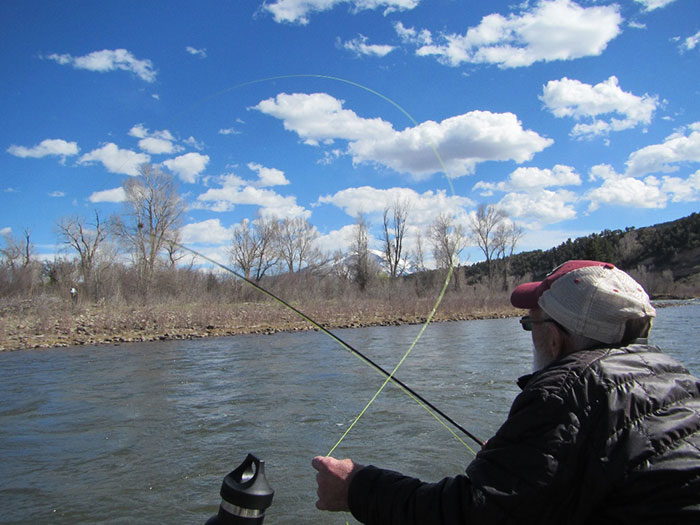 My dad prepares to roll-cast to the bank.
Photo by John McKinnie 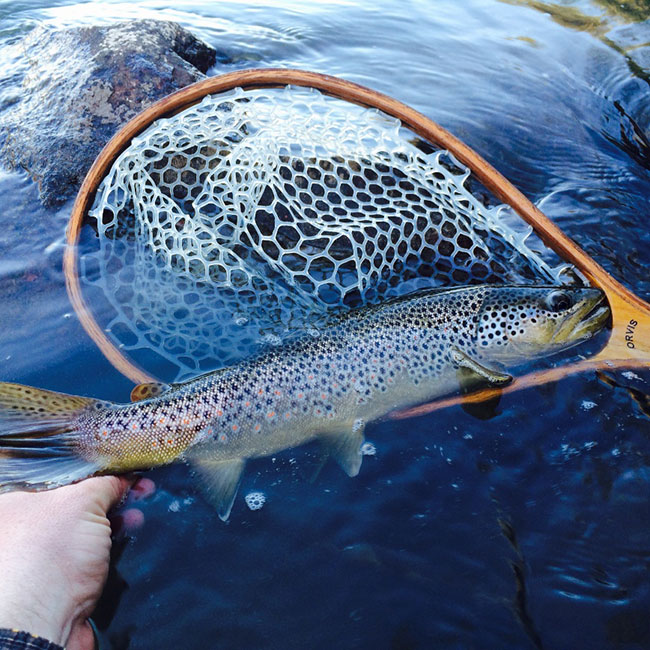 Next, guide Maggie Mae Kuhlman has been busy fishing some of the stillwaters around the area, spending time on the Missouri river, and she recently had the chance to float the Blackfoot and Clark Fork rivers with some Orvis folk. Maggie was invited by Phil Monahan, Editor of the Orvis News, to spend a day on the water following the Orvis Guide Rendezvous! Even though this was her first trip down the Blackfoot, they were still able to find a few fish. 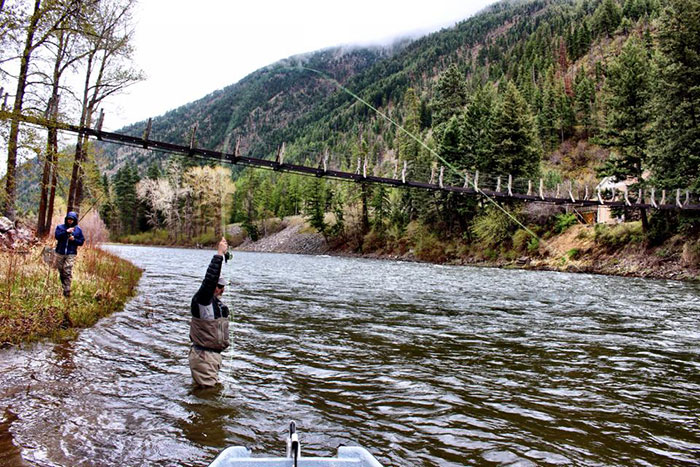 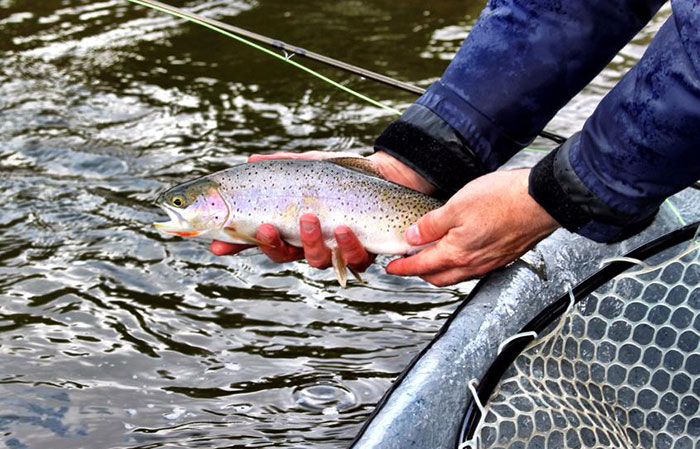 Rick Reed has been fishing on some of the rivers closer to the ranch. He introduced a new angler to fly fishing while floating the Yellowstone River! Lots of big brown trout can be landed in the spring, as they are stocking up on calories following the winter. After being spoiled by landing multiple nice browns, I am sure this beginner will now be hooked! 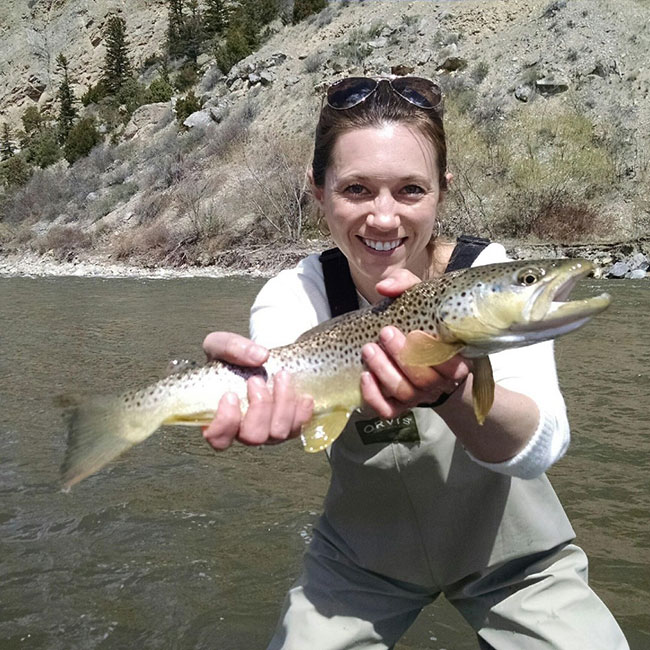 That’s a heck of a trout for a first-time angler on the Yellowstone.
Photo by Rick Reed

Finally, guides Jake Messinger and Josh Berry have been chasing hatches around the state. Once a fisherman reaches the springtime and we start seeing bugs fluttering around the river, there’s a certain “kid in a candy store” atmosphere. Jake has been to the Big Hole River searching for the Skawala hatch, a mythical early-season stonefly. Even though there were not a lot of bugs, the fishing was still pretty good. 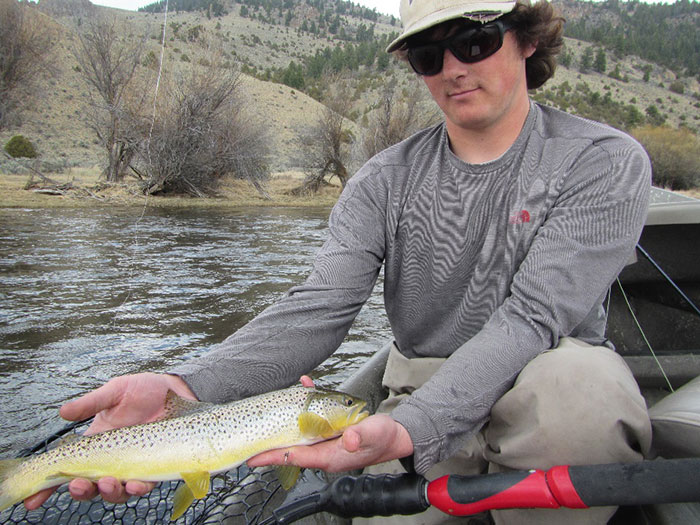 Fortunately, there has been no shortage of bugs on the Madison River, with the famous Mother’s Day caddis hatch coming a little early. Along with the clouds of bugs, there have also been plenty of fish feeding on the surface, making for excellent dry fly fishing! 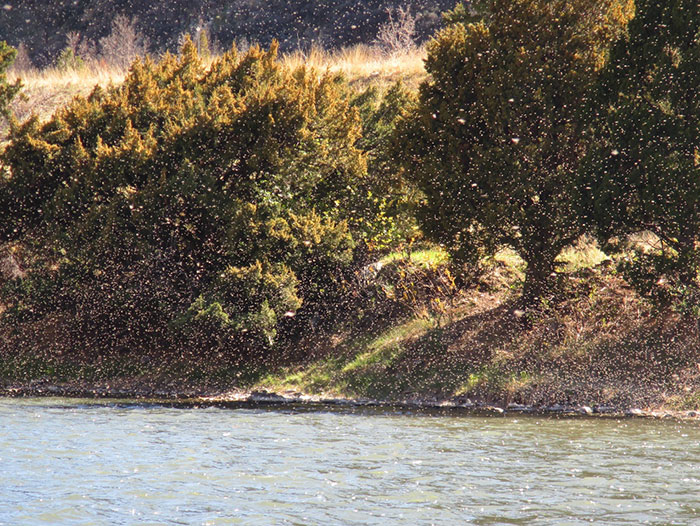 The Mother’s Day caddis hatch brings even big trout to the surface.
Photo by John McKinnie

One thought on “Photos of the Day: Guides Prepare for the Season on the Water”